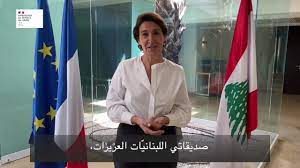 French ambassador in talks with Hezbollah

“Discussions tackled the current general Lebanese issues, especially Lebanon’s implementation of the necessary steps for the structural reforms process and an evaluation of the latest parliamentary elections, their results and their impact on the situations,” al-Liwaa newspaper reported on Wednesday.

Grillo for her part “relayed French keenness and concern over the need to quickly form a government, without voicing support for a particular figure,” the daily added.

“The talks did not at all tackle U.S. envoy (Amos) Hochstein’s visit nor border demarcation, as Grillo stressed that French support for Lebanon will continue,” al-Liwaa said.

The newspaper added that communication between France and Hezbollah has never stopped and that Grillo “coordinates with the American side over these issues and over the entire relation with Hezbollah.”