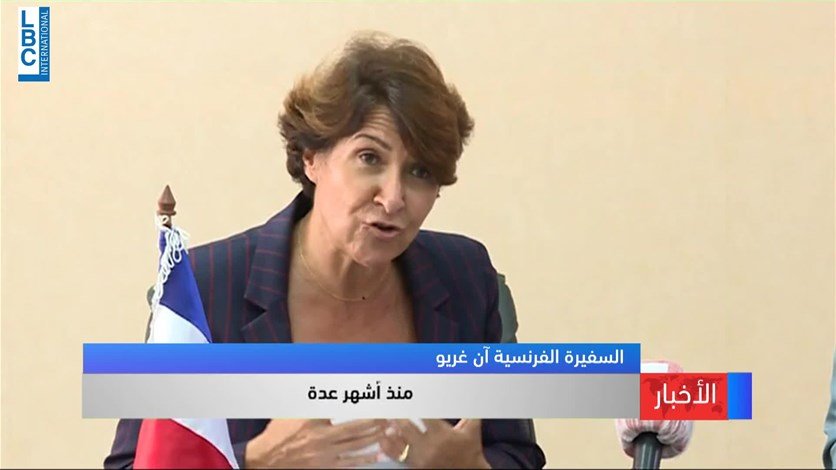 On Tuesday, at the request of President Emmanuel Macron, French Ambassador to Lebanon Anne Griot briefed Lebanese President Michel Aoun on Macron’s Gulf tour, especially his visit to the Kingdom of Saudi Arabia which “expressed its commitment to helping Lebanon, pointing out the need to implement the commitments that have been undertaken,” as stated by the media office of the Lebanese presidency.

During the meeting, Griot stressed that “Saudi Arabia and the Gulf countries are ready to undertake the required steps, and that for its part, Lebanon should undertake what is required from it and prove its credibility in its commitment to reforms, especially the structural reforms that require new work tools to confront the deep crisis.”ad

The meeting held last Saturday in Jeddah between Crown Prince Mohammed bin Salman and Macron saw the issuing of a statement concerning Lebanon, in which the pair stressed the “need (for) the Lebanese government to undertake comprehensive reforms.”

The two sides also stressed the “need to limit possession of arms to legitimate state institutions,” and that “Lebanon should not serve as a base for terrorist acts that destabilize the security and stability of the region, or a base for drug trafficking,” further stressing “the importance of strengthening the role of the Lebanese Army in maintaining the security and stability of Lebanon.”

The pair had made a joint phone call during the meeting with Lebanese Prime Minister Najib Mikati.

During her talks with Aoun, Griot stressed the importance placed by the international community and France in the legislative, municipal, and presidential elections due next year.

In response to the Saudi-French statement, on behalf of Hezbollah, former minister Mohammed Fneish said on Tuesday that the group “will not … substitute the symbol of our dignity and freedom with bare essentials of living conditions.ad

“The attempts to make us relinquish the resistance and its arms in return of resolving the economic crisis is something unacceptable to us,” he added.

The meeting held last Saturday in Jeddah between Crown Prince Mohammed bin Salman and Macron saw the issuing of a statement concerning Lebanon, in which the pair stressed the ‘need (for) the Lebanese government to undertake comprehensive reforms.’

Cabinet sessions have been suspended since Oct. 12 over Hezbollah’s stubbornness over the  investigation into the Port of Beirut explosion. Judicial investigator Tariq Bitar is accused by the group of being biased against it, according to its chief, Hassan Nasrallah.

On Tuesday, the Civil Court of Appeal of Beirut, headed by Judge Randa Harrouq, rejected a lawsuit submitted by former minister Youssef Fenianos against Bitar “for lack of qualitative jurisdiction.”ad

Harrouq decided to “fine the plaintiff an amount of 800,000 Lebanese pounds ($530) and inform Judge Bitar of the content of the decision, which entails that he continues his investigations related to the file of the Port of Beirut explosion.”

A judicial source told Arab News that the defendants have exhausted all the steps that could be undertaken at the Court of Appeal, and that they might resort to the Court of Cassation to obstruct the interrogation of 4 former ministers in addition to former Prime Minister Hassan Diab.

Bitar has not yet undertaken any indictments despite the fact that nearly 16 months have passed since the disaster.

According to another judicial source, Bitar has rejected all attempts to remove the brief from him and to refer the ministers and the prime minister to a court that would be formed by Parliament to try presidents and ministers, a request made by Hezbollah and the Amal Movement.