A Belarusian-Israeli convert to Islam was convicted Wednesday of attempting to join the Islamic State terrorist group in Syria.

Valentin Vladmir Mazlevski, 40, who was arrested nearly a year ago while trying to travel to Syria via Turkey, was convicted by the Nazareth District Court of contact with a foreign agent, attempting to travel to an enemy country and obstruction of justice.

Mazlevski is from the Arab Israeli town of Shibli–Umm al-Ghanam, his wife’s hometown. The father of five moved to Israel from Belarus in 1996 at age 18 and converted to Islam four years later, while he was serving in the Israel Defense Forces, the Shin Bet said in its indictment.

“The investigation revealed that Mazlevski, who was active in IS-supporting groups on the internet, shared details of his intentions to travel to Syria and even coordinated his arrival with [the groups],” the indictment said. 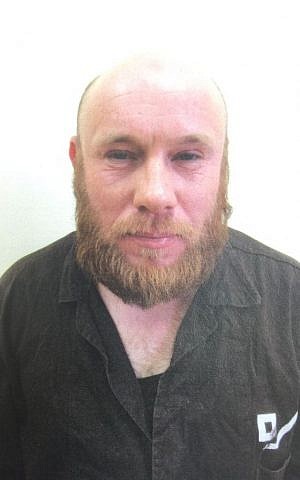 Valentin Vladmir Mazlevski, a Belarusian-Israeli man charged with attempting to join the Islamic State in Syria and Sinai, in an undated photograph. (Shin Bet)

Mazlevski argued that he did not want to join the military ranks of Islamic State, but rather was traveling to Syria in order to live under the nascent Islamic Caliphate set up by the international terror organization, according to the Nazareth District Court’s decision.

The defendant also said he did not know Syria was considered an enemy state, the decision said.

On January 16, 2017, Mazlevski was detained and interrogated in Ben Gurion International Airport, where he had gone to catch a one-way flight to Turkey but was stopped at the gate. The Shin Bet said it had received advance intelligence about Mazlevski’s plans.

In the days that followed, Mazlevski attempted to remove any trace of Islamic State support from his cellphone, deleting accounts and conversations, according to the indictment. However, on January 26 he made contact on the Telegram messaging application with a Chechnyan who had links to Islamic State

Mazlevski was arrested on February 7 and admitted to investigators that he had planned to join Islamic State in order to “fulfill the commandment placed on every true Muslim to live under an Islamic state and hold fast to his beliefs,” police said.

Police were aware of Mazlevski’s support for Islamic State since at least July 2016. That month he was brought in for a “debriefing, in which it was clarified to him that Islamic State is an illegal organization and that he has been ordered to stop his security activities,” according to court documents.

In October of that year he began looking into joining the fighting in Syria. He contacted a purported Islamic State fighter in Syria who identified himself as “Abu Abdullah.” But before he could set out, Abu Abdullah broke off contact and scuttled Mazlevski’s plans, according to police.

A month later, he reached out to an alleged Islamic State member in the Sinai Peninsula and considered joining the fight against Egyptian troops there, police said.

Apparently undeterred, Mazlevski contacted a Russian-born IS fighter in Syria in January and began making preparations to travel there through Turkey, according to the indictment.

Mazlevski will appear before the court again on February 8 for a sentencing hearing.

The Shin Bet security service estimates that approximately 50 Arab citizens of Israel have traveled to Syria or Iraq to join the group in recent years.