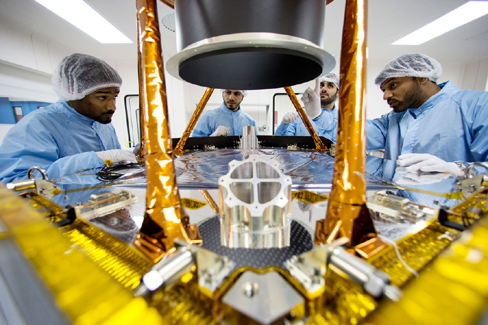 The first satellite built by Emirati engineers locally has passed the solar panel deployment test in time for its launch into space next year.

The Mohammad Bin Rashid Space Centre (MBRSC) on Wednesday announced the success of KhalifaSat in passing the test, after the completion of several installation and assembly tests for its system and different engineering parts.

KhalifaSat is the first satellite to be manufactured in the UAE and will be launched into space from Japan next year. It’s a solar-powered, remote-sensing satellite that, when placed into a Low Earth Orbit of approximately 613km, can capture detailed imagery capable of competing with the highest industry standards. The Solar Panel Deployment test confirms that the satellite has the full capability of conducting its entire operations smartly after its launch into space in 2018 and reaching its orbit after separation from the rocket. The test also proves that KhalifaSat’s solar panels will not open during the launch phase inside the rocket.

Yousuf Hamad Al Sheibani, director-general of MBRSC, said achieving this important step in manufacturing KhalifaSat reflects the success of the country’s strategy in having its own satellite manufacturing industry.

“The country has established world-class infrastructure, which enabled us to manufacture and carry out the necessary tests to the satellite at the Space Technologies Laboratories at the centre. The capabilities and expertise of the KhalifaSat team of Emirati engineers raises our pride and confidence in their success in this mission, especially that the satellite has specifications and technologies which make it one of the pre-eminent satellites of its category in the world,” Al Sheibani said.

“We assertively look forward to successfully accomplish the coming phases, until the satellite is ready to be launched into outer space next year. KhalifaSat puts the satellite manufacturing industry in the UAE in an international competitive position,” Al Sheibani concluded.

Amer Al Sayegh, KhalifaSat project manager at MBRSC, explained that the satellite’s success in opening the solar panels at this phase in the manufacturing process shows the efficient overall operations of its engineering, electrical and mechanical aspects.

“Among the tests that KhalifaSat has successfully passed at MBRSC Space Technologies Laboratories were the sun sensors test, Earth magnetic field sensors test, antenna movement and orientation to earth test etc,” he said.

“After KhalifaSat’s separation from the rocket, it will automatically open the solar panels in direct position to the sun. The control command room at the centre [here in Dubai] will expect to communicate with the satellite any time then to ensure the operative performance of all its systems in space, and be prepared to smartly capture the first satellite image,” he added.