A distinguished mix of business, general and commercial aviation and aerospace exhibitors gathered this week at Riyadh’s Thumama Airport for the first ever Saudi International Airshow.

For the first time in Saudi history it was possible to make a selfie with a Saudi’s Airforce F-15 Eagle or Eurofighter Typhoon fighter jet, including armor. For the occasion new asphalt was put on the runway of Thumama Airport so the superjumbo Airbus A380 could give acte de presence: the state-of-the-art jumbo that will be taken out of production in 2021.

Flyby’s by both commercial aircrafts and various fighter jets guaranteed that all ingredients for a prestigious show were present in Riyadh this week. This first ever Saudi International Airshow was held under patronage of His Royal Highness Prince Sultan Bin Salman Bin Abdulaziz al Saud who is the chairman of the Saudi Space Agency and founder and Chairman of Saudi Aviation Club that use the same venue – Thumama Airport approximately 60 km north of Riyadh – for their activities.

Pride
The aim of the first ever airshow in the Kingdom was to further connect the Aviation and Aerospace industry to Saudi Arabia. It provided an international platform to connect professionals across all areas of the industry and promote successful worldwide trade. This years’ show did just that, and it also became evident that Saudi Arabia launched with this airshow one of the new ‘must-attend’ international aviation events in the region.

The event also created a sense of pride amongst its local Saudi visitors and spectators. The audience was wide varied. Besides VIP’s, national and international business men, curious soldiers from both the Saudi Ground and Air force, civilians and even students made their way to the site.

“I am very proud to see that all the major players in the aviation industry have gathered here at this great event, while at the same time displaying all the industry’s latest developments and innovations”, said Abdullah Al-Abdulwahed CEO at Mkyal a consultancy firm that helps international players doing business in the Kingdom.

Commenting on the long lines at the registration boots, and the lack of air-conditioning in the main exhibition hall: “There are definitely some lesson to be learned for similar future events, but nothing major. The trend for the upcoming years is definitely set.”

The airshow attracted a well-balanced mix of over 750 Commercial, Business & General Aviation, Airport Infrastructure exhibitors, while at the same time over 100 aircraft ranging in size from single and twin-engine models, turboprops, and executive jets through to commercial wide-body aircraft where on display. The venue offered chalets located next to the runway to enable manufacturers to present their aircraft and to facilitate demonstration flights. Over 15,000 visitors attended this first-ever 3-day international Aviation event in the Kingdom.

Exhibitors
Besides all the large players in the market like Boeing – no comments were made on the global grounding of the 737 MAX – Lockheed Martin, Airbus, and Rolls-Royce plc also smaller players and startups in the aviation industry were present.

Camille Abu Jaoude from PrivateAir explains that attendance was worth their while “First time events like this are always exciting, because you never know if they will be successful or not. People always have to get used first to the idea of having something new.”

PrivateAir is an international business aviation group, with its headquarters in Geneva Switzerland. The company is made up of three divisions delivering service both in the air and on the ground: Scheduled Services, Private Training and Business Aviation, Aircraft Sales and Sourcing, Aircraft Management and Ground Services to name a few.

Business-wise participation in the airshow was lucrative explained Abu Jaoude: “We have signed some interesting and very lucrative deals in the first day of the exhibition. I expect some agreements to be signed in the coming 24 hours as well. All in all, not bad at all for a first-time event.”

New players
It is expected that Aviation will play an essential role in the diversification and expansion of the Saudi economy. In the coming years the industry will expand further through the establishment of new airports and the expansion of existing facilities. There comes by that the entry of new participants into the market will be an important development.

The aviation industry encompasses dozens of sectors from construction companies that build airport facilities to aviation fuel suppliers and even manufacturers of goods sold in airport retail outlets. The ambitious Saudi Vision 2030 vision will create many opportunities in the aviation sector in Saudi Arabia for both established companies willing to expand their business and new players seeking to enter the Saudi market.

One of the new players on the market present at the Airshow was Prince Sultan Defense Studies & Research Center (PSDSARC). The center – linked to the King Saud University in Riyadh – is a 100-percent local made defense and security applied research and technology development organization that is recognized for its Innovation. 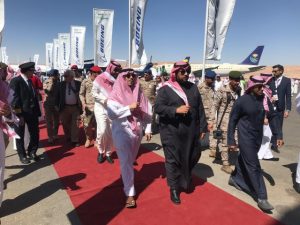 At the show it presented some prototypes of its unmanned drones and remote-controlled aircrafts. The Shaheen VTOL UASN being one of its eye-catchers: a vertical takeoff and landing unmanned Aerial System designed for surveillance and reconnaissance. A system fully developed, designed and build inside Saudi Arabia. A development that is an excellent example what the Saudi Vision 2030 entails.

*Arthur Blok is the Executive editor in chief of The Levant News.