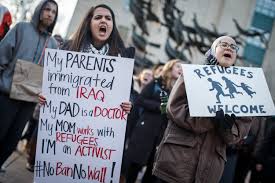 A federal court in California has blocked the Trump administration from terminating the Temporary Protected Status program that allows immigrants from four countries to live and work in the United States.

TPS was created by Congress in 1990 to allow people from countries suffering civil conflict or natural disasters to remain in the U.S. temporarily.

Wednesday’s ruling came in response to a lawsuit filed by the American Civil Liberties Union (ACLU) alleging the Trump administration violated constitutional protections of due process and equal protection when it announced it would terminate the program, beginning with immigrants from Sudan next month.

The ACLU lawsuit suit alleges that the effort to end TPS “was motivated by intentional race- and national-origin-based animus against individuals from what President Trump has referred to as “shithole countries.”

In his ruling, Judge Chen said ending TPS would cause “irreparable harm and great hardship” for immigrants, many of whom have lived in the U.S. for at least a decade, held down jobs, and have raised families. He also said there is evidence that President Trump tried to end the program because he is motivated by “an animus against non-white, non-European aliens.”

The lawsuit also alleges that the eliminating TPS would dramatically alter the lives of more than 270,000 U.S. citizen children who have at least one parent with TPS. Such children would be forced to make a choice between the care and support of their parents and the rights and benefits of U.S citizenship.

Judge Chen also said that the government also failed to show how it would be harmed by continuing the TPS program.

“The Court’s decision usurps the role of the executive branch in our constitutional order. The Court contends that the duly elected President of the United States cannot be involved in matters deciding the safety and security of our nation’s citizens or in the enforcement of our immigration laws. The Justice Department completely rejects the notion that the White House or the Department of Homeland Security did anything improper. We will continue to fight for the integrity of our immigration laws and our national security.”