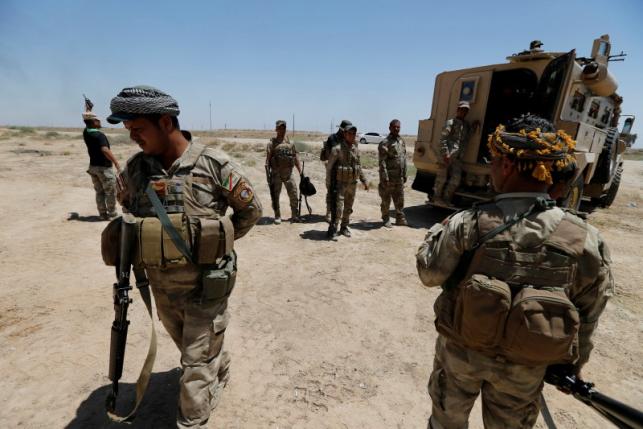 The Levant News | BAGHDAD | BY STEPHEN KALIN AND AHMED RASHEED for REUTERS | Iraq's interior minister said it was difficult to prevent attacks against people fleeing the Islamic State-held city of Falluja, but denied that such actions were systematic and pledged to punish anyone proven guilty of abuses.

A regional governor said this week that 49 Sunni men had been executed after surrendering to a Shi'ite militia supporting the army offensive to retake Falluja, and more than 600 had gone missing between June 3-5 after escaping the city.

Interior Minister Mohammed al-Ghabban, a senior member of the powerful Shi'ite Muslim political party the Badr Organisation, said paramilitary fighters from the Popular Mobilisation Forces (PMF) had been referred to court over the alleged violations but that no police personnel appeared to be involved.

Badr, which is backed by neighboring Iran, is part of the government's ruling coalition and has long been criticized for controlling the Interior Ministry.

Its military wing, a leading force in the mostly Shi'ite Muslim PMF, is participating in the campaign to retake Falluja, an hour's drive west of Baghdad.

Sohaib al-Rawi, governor of the overwhelmingly Sunni province of Anbar where Falluja is located, accused PMF fighters on Sunday of detaining, torturing and killing civilians fleeing Falluja amid the battle to drive out Islamic State.

Ghabban told Reuters in an interview late on Tuesday that such behavior was not systematic but that he could not guarantee it would not occur, noting that violations by U.S.-led coalition forces during their nine-year occupation of Iraq did not amount to a policy of rights abuse.

Some Islamic State fighters disguise themselves as civilians, he said, "making it very difficult to distinguish between actual civilians and those who are pretending".

"The diversity of formations, the large battlefield and its intersection with civilian areas is a challenge in itself which could lead to infringements, individual behavior, violations of human rights or abuses."

Ghabban said he supported investigating the claims and punishing anyone proven guilty, but warned against jumping to conclusions before the cases went to court.

"We do not want to get ahead of events and regard these as facts before they are confirmed, nor do we want to be negligent and gloss over any crime," he said.

Islamic State, which has been pushed back from several key cities it seized in 2014 during a lightning sweep across Iraq's north and west, has used residents as human shields to slow the troops' advance and thwart a U.S.-led air campaign backing them.

Falluja is a historic bastion of the Sunni insurgency against U.S. forces that toppled Saddam Hussein, a Sunni, in 2003, and the Shi'ite-led governments that followed.

The push on Falluja comes at the same time as other enemies of Islamic State launched major offensives on other fronts, including a push by U.S.-backed forces against the city of Manbij in northern Syria.

They amount to the most sustained pressure on the militants since they proclaimed their caliphate in 2014.

Prime Minister Haider al-Abadi's initial decision to assault Falluja appears to have gone against the plans of his U.S. allies, who would prefer the government concentrate on the northern city of Mosul.

But a string of bombings last month in Baghdad which killed more than 150 people in one week, the highest death toll this year, cranked up pressure on Abadi to do something about Falluja, just 50 km (30 miles) west of Baghdad and seen by many Iraqis as an irredeemable bulwark of Sunni militancy.

Ghabban said military gains in Falluja would help reduce attacks claimed by Islamic State in Baghdad, suggesting the militants were using the city, along with other areas in Anbar and Nineveh provinces, to assemble car bombs sent to the capital.

Intelligence has helped security forces disrupt dozens of "terrorist networks", said Ghabban, leading to a 60 percent drop in attacks in Baghdad in 2015 compared to the previous year when Islamic State threatened to overrun the capital.

But the minister acknowledged that Islamic State maintains safe havens in areas just outside Baghdad, like Arab Jabour in the southern outskirts as well as Tarmiya and Mishahda in the north, whose terrain makes it difficult for security forces to pursue suspected militants.

Ninety percent of explosions in Baghdad come from such areas outside the city proper, he said.

Ghabban also insisted that attacks in the capital would not end unless "disorder" plaguing the country's security apparatus was eliminated.

He said security forces outside his control, including the National Security Advisory, two Defence Ministry directorates, the elite counter-terrorism service and regional security commands, overlap with the Interior Ministry's own counter-intelligence efforts.

"This plurality leads to confusion in managing the security file," he said. "I believe if we do not (fix) it, we will continue to suffer from breaches and problems."