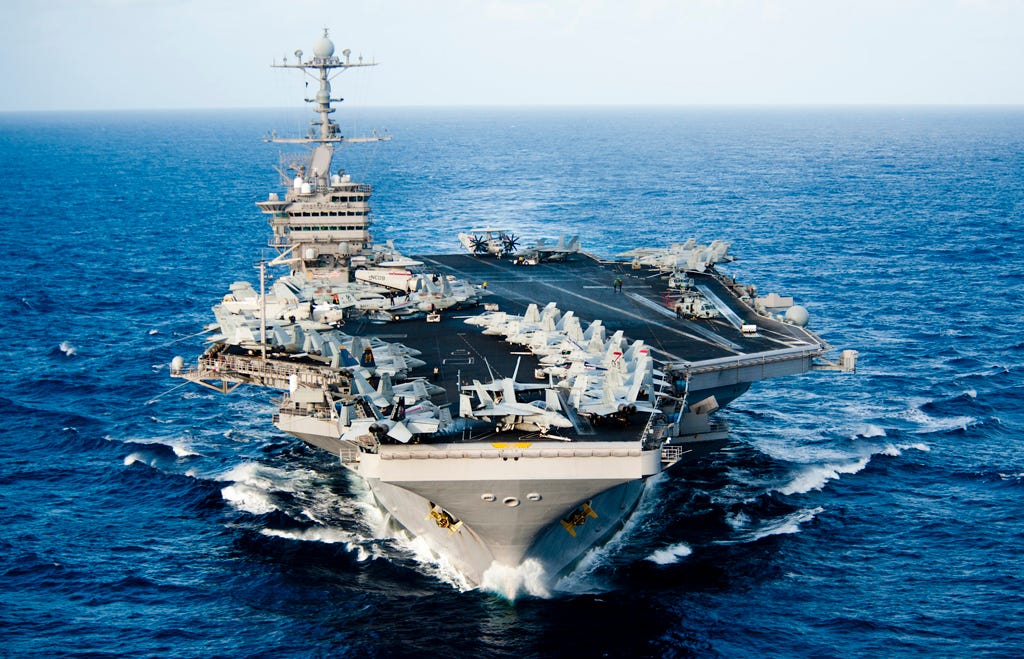 Image credits: US Navy carrier in the Arabian Gulf

Facing the hard facts about the ‘world class’ US Navy

This goes far beyond the future utility of aircraft carriers. The culture and leadership are diminishing the force’s maritime dominance, too.

The state of modern defense journalism in America is a sad one indeed. For example, I give you a recent article by Kris Osborn, the defense editor for The National Interest. His recent plea for more aircraft carriers for the U.S. Navy reminded me of the late Tom Clancy’s jingoistic boasts about the American military.

Nothing in the world can project power like a U.S. Navy aircraft carrier, which brings the ability to launch massive offensive strikes from waters offshore, holding targets and enemies at risk. This proven reality explains why the mere forward presence of a carrier can have a “calming” type of deterrent effect. At times, the Navy and Pentagon’s leaders have called for eleven carriers, and have most recently asked for twelve.

Nor is this ancient history. More recent articles, a vast departure from Osborn’s work, refer to the continuing problem of the Navy’s inability to protect its high-cost core assets. There are also credible reports that aircraft carriers are becoming vulnerable to China’s anti-ship ballistic missiles and other systems. Part of the problem is also the Navy’s poor anti-submarine systems (ASW) systems. This all must be given much more serious attention by anyone who thinks everything’s just fine.

But the problems the Navy has today go way beyond the utility of its carriers. Leadership has come under increasing scrutiny. A scathing article called “The United States Navy — Feet of Clay,” published in The Naval Review in 2004 by then-Lieutenant Commander Aidan Talbott of the Royal Navy, hit the nail on the head, and even though it is an older account, recent Navy disasters such as the tragedies involving the McCain, Fitzgerald, and the Bonhomme Richard amphibious vessel, which was destroyed in port last year by fire, bear many of his criticisms out.

While a National Transportation Safety Board investigation found a lack of training and oversight to blame for the 2017 McCain accident that left 10 dead, the Navy put the onus squarely on the ship’s leadership.  A Navy investigation into the 2017 Fitzgerald collision, which drowned seven sailors, found sweeping personnel problems dating back years. The chaotic response to the Bonhomme Richard fire was due to dysfunctional communication in the chain of command, according to that investigation.

In 2005, Lt. Commander Talbott, who did a two-year tour with the U.S. Navy, described to me the service as “cumbersome, vastly overmanned, stolidly managed, with massive institutional inertia and hobbled by internal and external politics.” He went on to say that he endured “monstrous levels of inefficiency in many respects” during his time there.

Recent research on Navy leadership suggests that the situation as bad, if not worse, as in 2004. According to a 2021 survey of current and retired Navy officers: “Concern within the Navy runs so high that, when asked whether incidents such as the two destroyer collisions in the Pacific (McCain and Fitzgerald), the surrender of a small craft to the IRGC (Iranian Republican Guard Corps) in the Arabian Gulf, the burning of the Bonhomme Richard, and other incidents were part of a broader cultural or leadership problem in the Navy, 94% of interviewees responded ‘yes.’”

Critics bemoan a promotion system that requires in part a perfect record that is attainable through averting risks, and working the right angles, and people. This promotion system has to go if the USN is to become a truly professional navy, and to start designing and building great ships again. The problems plaguing the Zumwalt-class destroyer and Littoral Combat Ship (LCS) programs, for example, represent moral as well as material failures.

According to former Secretary of the Navy John Lehman, the Zumwalt-class simply tried to incorporate too much unproven technology in a new ship: “Cramming a lot of new technologies into one platform was just crazy—it was doomed from the start.” The LCS, better known as “Little Crappy Ships” has had many problems according to the Navy Times, specifically, “half of the Navy’s littoral combat ship fleet is suffering from structural defects that have led to hull cracks on several vessels, limiting the speed and sea states in which some ships can operate.” The Navy is already decommissioning these ships after less than a decade of use.

According to Mark Thompson of the Project on Government Oversight, “as the Zumwalt class winds down — the last of the three ships is slated to be delivered in 2020 — taxpayers can view, to their horror, the arc of the program from beginning to (nearly) end. The vessels represent a case study of a program run without adult leadership. Its contractors and admirals were blinded by ambition that had little to do with providing the fleet with enough hulls to patrol the world’s oceans, but everything to do with maritime hubris that didn’t pan out.”

Like Commander Talbott, I am a fan of the Navy and want to see it perform to its true potential, but this won’t happen unless significant changes take place. In addition to reforming the personnel system, it has to get over its fixation on aircraft carriers, which are obscenely expensive, and use the resulting savings and existing talent to evolve into a 21st Century fighting organization with new tactics, new platforms, and better leadership. More aircraft carriers is not the solution.

Commander Talbott concluded in his article “The United States Navy — Feet of Clay,” by saying:

“The USN clearly can be a world class organisation in terms of output — their ability to surge and support extensive assets globally and to put ‘warheads on foreheads’ is unmatched but they are emphatically not world class in terms of the human, financial and managerial resources consumed to achieve that output. We cannot divest ourselves of the inextricable levels of support we now rely on from the US but we must always be acutely conscious of what the US cannot do as much as what it can. On balance, we sure would want to be with them rather than against them but we must remain in this partnership with our eyes wide open and a healthy awareness of where the strengths and the weaknesses lie of our Number One friend and ally.”

I would like to be just as optimistic as Commander Talbott was, but it is difficult to see this organization continue to blunder and make mistakes that go uncorrected decade after decade. I fear that the only way to get the USN to change is to lose a war against China over Taiwan, which now seems increasingly likely as each day goes by since last month’s visit by House Speaker Nancy Pelosi to the island that Beijing insists is part of China.

The People’s Liberation Army Navy now has more ships than the USN does, and although more does not always mean better, the numerical difference can be a warning to people in Washington and media editors like Kris Osborn that the USN’s era of global maritime dominance is rapidly coming to an end. More probably, the warning signs will be ignored, and the boosterism of writers like Osborn will push us closer to the catastrophe that none of us want to happen.