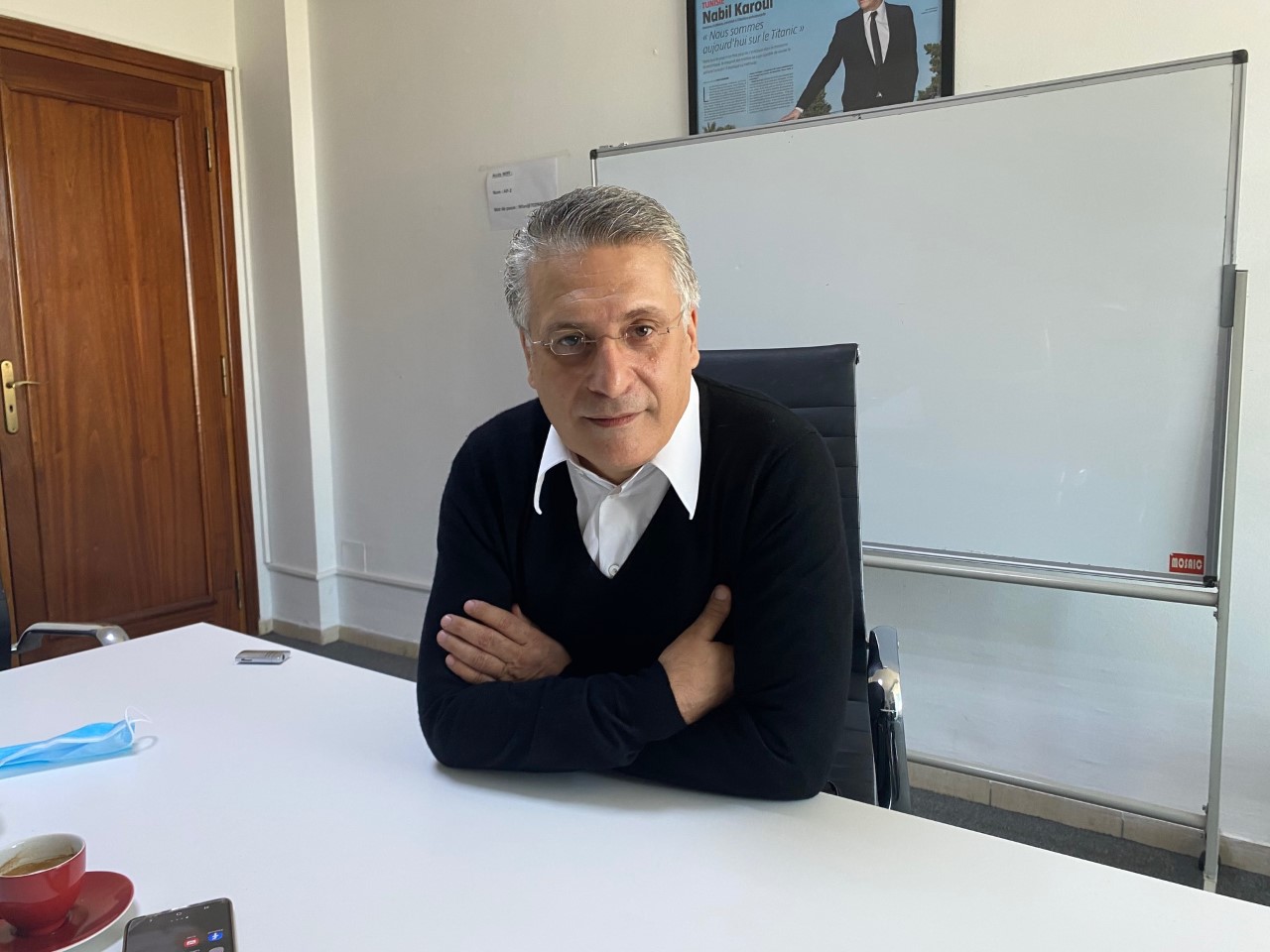 Exclusive interview with Tunisian opposition leader Nabil Karoui: “We are not looking for portfolios or ministers: important for us is Tunisia”

After weeks of negotiations Tunisia’s parliament voted in September for a second new government in just six months. The new government of Hichem Mechichi is unique in Tunisia’s history: not one party in parliament is represented in it. The vote was won after a diplomatic offensive behind the scenes by opposition leader Nabil Karoui. One of the few political leaders in Tunisia who puts the country before his own political interests.

The Levant News had an exclusive interview with Karoui in his office in Tunis.

By Arthur Blok
Mechichi formed an administration with independent technocrats in order to "present urgent solutions" for a country where an ailing economy has been damaged further by the coronavirus pandemic. His decision to bypass most political factions frustrated many MP’s in the parliament. In particular the Islamist party Ennahdha.

You stepped in and convinced Ennahda and the Islamic extremists of the Al-Karama party to vote in favour of the new government, while they were both seeking a "political" government reflecting the various forces within parliament. How did you convince them?

Karoui: “After all, politics is a game of power and shifting personal positions. After we elected Rached Ghannouchi as the speaker of the House, and got Samira Chaouachi, the first female Vice President of the parliament in return. We created a culture of consensus and diplomacy. That is how I see our new role in the Tunisian political spectrum: a party in the political middle that is capable of doing business with everyone. As long as it is in the interest of Tunisia.
Because of our position, we are the only party able to deal with both the Islamists as with the leftists. In the end this is a country where you need to make compromises. You can not get everything you want. It just does not work like that.”

In an exclusive interview with the Levant News earlier this year, Karoui predicted a short life of the Elyes Fakhfakh government. It seems he was right. Fakhfakh created a larger economic mess and was accused of corruption. Parties like the movement of former prime minister Yousef Chahed that supported his government largely collapsed.

In your own party Qalb Tounes (Heart of Tunisia) many things happened as well: you lost 12 MP’s of your parliamentary block. They staged a spectacular mutiny because they were not happy with your diplomatic course.

Karoui: “Correct, but late October four MPs decided to join our parliamentary block: Tunisia’s political dynamics in a nutshell. Even though we now have 30 deputies left, we are more efficient and close to each other than before. It is a matter of political dynamics.
The 12 MP’s that left my block were unhappy with the role I played, so they decided to form their own block in parliament. It is not the most honorable thing to do, but it is their right. So be it.
At the moment we are the only big block in the parliament that is ready to work with both Ennahda and Karama. If we do not do that, we need to organize new elections. As in many other countries in this region, the Covid crisis came with a high price for our economy. It froze everything in the country.
With the electoral law we have in this country it is necessary that the first party works with the second party. That was sufficient in the past to govern. Not in the current status quo. It is still necessary to work together but we need another party to be able to govern.
The parties that were in the Fakhfakh government were unable to work together: they only had a majority when they voted for the government, that was it. After that the parties in the coalition were unable to get a majority for one single law. In theory, FakhFakh was doomed to fail as he was not even in the top three recommended by the political parties. He was in the bottom of the list and was recommended by Youssef Chahed’s political party, Tahya Tounes.
While we were not in the government, we were mature enough to vote in favour of some laws. It is not only about principles for us, we are here in the interest of the country.” 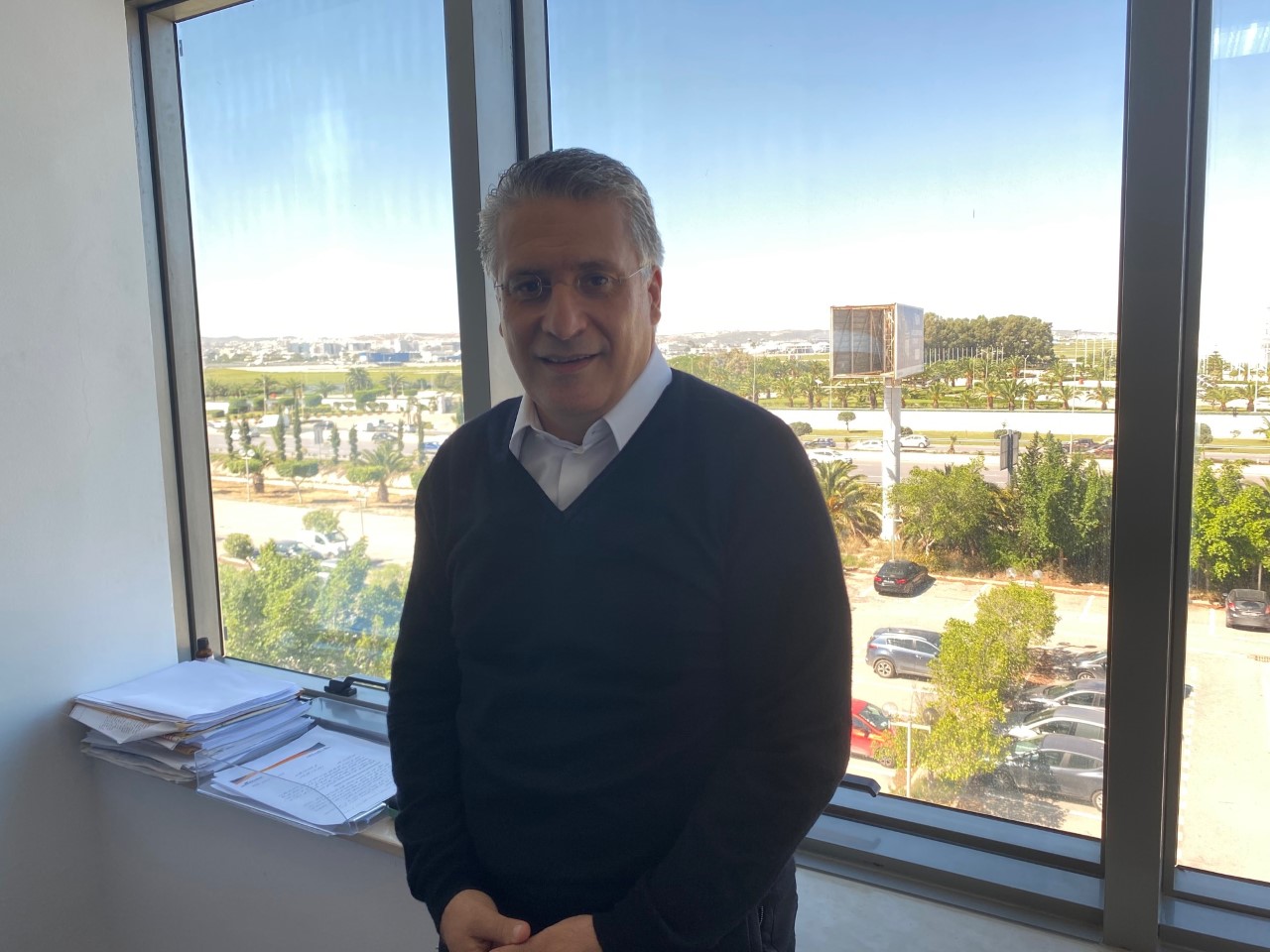 Now there is the government of Mechichi. How do you look back on the formation of this government?

Karoui: “The president of the republic, Kais Saied, wants to have the grip of power, that is evident. What he did with Mechichi is just unfair. The parliament gives the confidence to a government and the parliament takes it: that is the constitution. He ignored that and enforced his own candidate, for the second time.
When Fakhfakh resigned, the president asked us to do the masquerade of names again. We were all asked to put names of our favourite new candidate on a paper. Just because he does not he does not want to talk to parties itself it seems. He took all the names, looked at them and chose one that had absolutely no support from anyone.
Mechichi was the minister of Interior, before that we did not really know him. All of a sudden the guy appears as a pm-designate and we have to say ‘oke’. Initially we said ‘no’ but then the president had again the hand and pushed him forward as the sole candidate. Instead of ending up in a vicious circle creating a whole new crisis, we decided to meet him and we had a click with him.”

Are you happy with the performance of the new government in the first three months?

Karoui: “It is too early to say. It takes time for the dust to settle when a new government takes over. We have yet to see a vision and a strategy announced by the new government. Having said that, we will do our best to accompany the new government by sharing our thoughts, expertise and vision when it comes to economic recovery and social reforms.”

Many other Mp’s and political analysts told me that you were personally responsible to align all parties and to secure a vote of confidence for the new government. Why did you put so much personal effort in it?

Karoui: “Honestly I did not want to end up in a new political deadlock. I spoke personally with Ghannouchi and representatives of Karama and I convinced him to give Mechichi their confidence. The alternative would have been much worse. As a result we provided Mechichi with 120 deputies (QalbTounes, Ennahda, Karama, Al-Mustaqbal and some independents).
We need stability, that is what this country needs. Even if these guys were appointed by the president, it is not our problem. We need to deal with issues that matter. We are not looking for portfolio’s or ministers: important for us is our program for Tunisia.
We are now the guarantors of the stability of the government, if they lose our trust it will collapse again. We are between Islamists and secular parties and we speak to both of them, they do not speak to each other directly. We create a balance in the political landscape”

What are the main points on the political agenda for this new government?

Karoui: “First and foremost is economic recovery: a stimulation package and the fixture of years of economic mistakes that were made. For example the problems with our currency: our currency is not accepted anywhere, we are like North Korea almost. We need to work on that.
Second, is a serious solution to fight corruption. It has to be dealt with urgently, we cannot continue like this any longer. Corruption is a consequence of bad governance in this country: non implementation of rules, civil servants who are underpaid, etc. If the governance is good and matters are properly checked, a lot of issues would be resolved by itself.
If you look at public tenders in the public sector, this is still a big mess. Contracts are given to certain parties without a clear public tender process. If you regulate this, a lot of things will be solved by itself.
We had a problem with Fakhfakh: he signed some of his own public tenders while being in office. Granting himself government contracts while being in power he even made them a bit larger for himself. In other countries he would have been behind bars by now. That is ridiculous.”

How do you think the people perceive this government?
Karoui: “We all realized the principle is wrong, the will of the voters was not respected. That is the main reason why Ennahda and Karama said initially ‘no, enough is enough’. Put yourself in my shoes. I was the number one presidential candidate, and I was put in jail weeks before the elections. After the elections they did everything in their power for us not to take control of anything. Still we won a landslide victory in the parliament.
We were patient and wise. We decided to play a constructive role and show the people what we stand for. By the way we behave now, we are setting the rules with other members of the coalition. It is a very weird situation, I agree. But we are making the best of it.
We like Mechichi: he is a patriot, wise and calm person. Not arrogant like the previous prime minister. We are working to make the coalition to become bigger and give him and his government the support.
We are in the biggest crisis ever in this country due to Covid: fighting over who is going to be minister is ridiculous. What we need now is looking for solutions to get out of this crisis. For the first time in my career I am practicing politics. I am talking to parties left and right, but it is for the sake of the country. Stability and economic prosperity, and fighting poverty are more important than anything for our country. That is the only thing that matters at the moment.”

One comment on “Exclusive interview with Tunisian opposition leader Nabil Karoui: “We are not looking for portfolios or ministers: important for us is Tunisia””