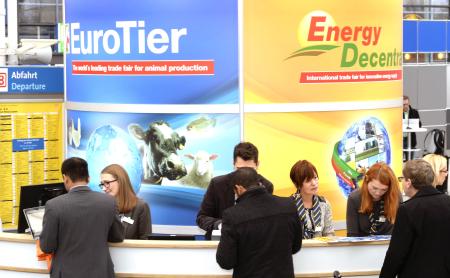 It will also be the first time EuroTier will be organising its fair outside of Germany.

During the last edition held in Hanover, Germany, in November, the ADFCA announced a partnership to organise the world’s leading trade fair for animal production. Held on an exhibition floor space of more than 270,000 square metres, the fair attracts about 2,600 exhibitors and 155,000 visitors annually.

The new fair offers a comprehensive overview of the global modern methods pertaining to animal husbandry, inputs needed for livestock husbandry and production, and the most efficient breeds. In addition to showcasing the most advanced technologies to digitalise livestock farming, the fair will highlight opportunities to exploit Artificial Intelligence, AI, and future technologies in addressing challenges that undermine efforts to achieve sustainable livestock development in the MENA region.

The MENA region has the fastest and highest meat market growth rate of any region in the world at almost 30 per cent. Between now and 2021, the livestock products market is expected to reach US$6.6 billion. There are over 25,000 animal holdings and 3.5 million heads of food-producing animals in Abu Dhabi Emirate. There are commercial farms for livestock production and factories for food industries and re-exportation.

Figures from the Food and Agriculture Organisation, FAO, suggest there are now about 143 million sheep, 73 million goats and 49 million cattle in the MENA countries. The UN Comtrade database revealed that the UAE imported live animals worth $204 million and meat and edible offal worth $1.63 billion in 2016.

At the same time, there are a number of challenges facing livestock farmers in the region. These include the costs of production and inputs; a lack of exploiting technology and AI in production processes; a focus on meat production that tends to ignore milk production and other animal products, and a lack of enough outlets for handling by-products, such as wool and dung, and related manufacturing industries.

During the fair, animal husbandry professionals will be provided with a comprehensive insight into the various production and marketing segments for both specific species and across all product categories.