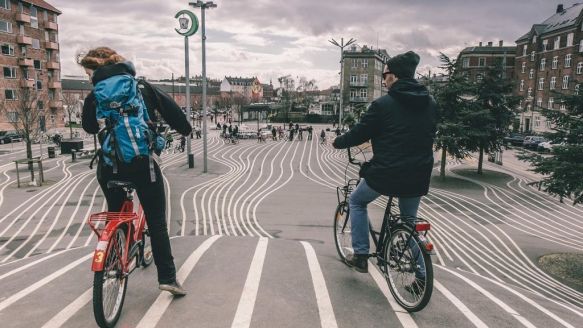 Beirut – By Niyazi G. Atay* — EU Delegation in Lebanon organized a public event in Beirut Hippodrome to raise awareness on the importance of green spaces in the city.

It was one of the sunniest days of Beirut autumn. Before the stormy rain season starts, probably the best day to organize last outdoor event in the city. EU Delegation in Lebanon might have thought the same thing that Beirut Hippodrome experienced one of its funniest days ever.

Local NGOs, dealing mainly with environmental issues in Lebanon, gathered in once a glorious western style club-complex accommodating wealthy Beirutis, accompanied by tens of children, as EU Delegation in Lebanon held the EU Green Day. Head of the Delegation of EU, Ambassador Christina Markus Lassen inaugurated the event and walked around the event site, where many stands were set up for kids to enjoy the day. She said that this is mainly an awareness event especially for kids. “The main purpose of this event is to promote the preservation of green spaces in Beirut. Since there is not enough green space for the healthy development of children in Beirut, we would like to create an opportunity filled with fun in one of a few green spaces left in the city.” She stated that although EU Delegation has been in contact with the Lebanese Ministry of Environment and contributing much in technical aspect, they still need the visibility at the community level.  “The EU supports the Ministry in the development of National Strategy for Air Quality Management approved by the Council of Ministers in 2018 and a methodology for delineating protected areas. Nevertheless, in order to engage more with the Lebanese society we came up with this social initiative free of any policy frameworks. As well, we desire to introduce European sports such as soccer during this event.”

Without doubt Europe is the birthplace and motherland of soccer. However cycling is much greener and healthier, taking into account the chaotic Beirut traffic. In this regard, Lucas was the most appropriate attendee of the event. Coming from Denmark for cycling around Lebanon, he was wandering around the place with his bicycle. As he was looking for something interesting for adults kids approached him and asked if the bike is for rent. He arrived in Lebanon 10 days ago via airlines and has been cycling for 10 days as true Danish, hosting the world’s most bike-friendly city of Copenhagen.

On the other side, there was another man walking around with a run bike at hand. Nicolas Abouchaar, a mechanical engineer with a professional automotive experience in Europe, is the creator of the Lebanese company Phoenus, which develops and manufactures among others, the brands triclus and twiclus. Returned to Lebanon 13 years ago, Nicolas has been designing and manufacturing tricycles, run bikes, as well as pedal-driven carousels. “Run bikes allow children to maintain equilibrium by pushing the feet on the ground, and then lifting them when they reach a certain speed” he says. Born in Moussaytbeh, Beirut he lives in Byblos and rents these bikes in Byblos Public Park. “Run bikes are very significant in movement coordination development of children; it is the main cycling learning tool in Northern Europe, where young children use them to go to school.” Nicolas introduced his twiclus in 2017, exactly 200 years after its ancestor was created by Karl von Drais in Mannheim, Germany. He has been manufacturing these bikes mainly out of plywood. Although most raw materials and components are imported, the manufacturing itself is very ecological, which contributes more meaning to this special day. “I have been developing new designs in Lebanon, which labels them as ‘made in Lebanon’. I designed the bikes I rent today, two years ago and they are working great.” He defines his objective very clear in line with that of the EU Green Day; “Our object is to reach as many children as we can, that’s why we prefer to sell to the communities and propose long-term rental or rebuy options.”

Many European families, residing in Beirut, benefited from this purposeful day. Maximilian, a 4 year-old Austrian boy, who recently arrived in Lebanon, was riding twiclus in the EU Green Day, while his younger brother was playing with sand as volunteers cheer him up. “He started using run-bikes at the age of 16 months and started riding a pedal-driven bike when he was two and a half years old” his mother says, who seems very happy to discover locally made run bikes.

Would bringing European values into the heart of Beirut help Lebanese authorities to deal more with promoting green spaces in the city? Inshallah!

Niyazi G. Atay is a freelance researcher and photographer based in Beirut.