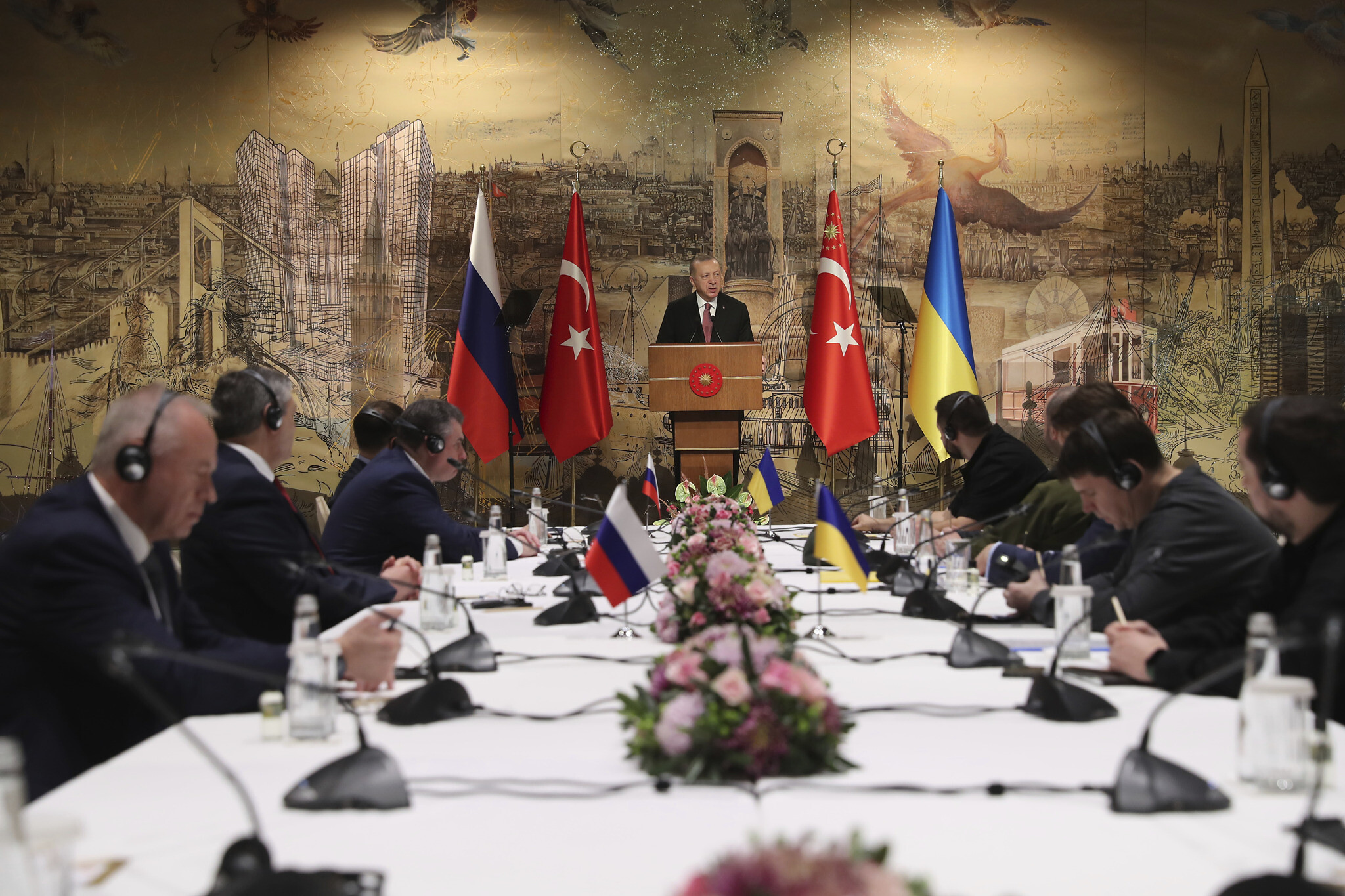 Russia promised on Tuesday to scale down military operations around Kyiv and northern Ukraine as a confidence-building step, in the most tangible sign yet of progress toward negotiating an end to the war.

During talks at a palace in Istanbul, Ukraine for its part proposed adopting neutral status in the most detailed formula yet for a potential settlement to the five-week conflict.

Moscow’s Feb. 24 invasion has been halted on most fronts by strong resistance, with Ukrainians recapturing territory even as civilians are trapped in besieged cities.

“In order to increase mutual trust and create the necessary conditions for further negotiations and achieving the ultimate goal of agreeing and signing (an) agreement, a decision was made to radically, by a large margin, reduce military activity in the Kyiv and Chernihiv directions,” Russian Deputy Defense Minister Alexander Fomin told reporters.

He made no mention of other areas that have seen heavy fighting, including around Mariupol in the southeast, Sumy and Kharkiv in the east and Kherson and Mykolaiv in the south.

Some analysts noted that Russia’s promise to reduce fighting mostly covered areas where it has been losing ground.

“Does ‘we’ll drastically reduce military operations around Kyiv’ = ‘we’re getting our ass kicked, transitioned to a hasty defense?’” tweeted Mark Hertling, a retired US lieutenant general and former commander of US forces in Europe.

Peace in sight?
Ukrainian negotiators said that under their proposals, Kyiv would agree not to join alliances or host bases of foreign troops, but would have security guaranteed in terms similar to “Article 5,” the collective defense clause of the transatlantic NATO military alliance.

They named Israel and NATO members Canada, Poland and Turkey as countries that may give such guarantees. Russia, the United States, Britain, Germany and Italy could also be involved.

The proposals mentioned a 15-year consultation period on the status of Russian-annexed Crimea, and could come into force only in the event of a complete cease-fire, the negotiators said.

The fate of the southeastern Donbas region, which Russia demands Ukraine cede to separatists, would be discussed by the Ukrainian and Russian leaders, they added.

Any peace deal would require a referendum in Ukraine.

The Russian delegation said it would study and present the proposals to President Vladimir Putin.

The Ukrainian negotiators called for a meeting between Putin and President Volodymyr Zelensky, with top Russian negotiator Vladimir Medinsky saying that could take place when foreign ministers were prepared to initial an agreement.

“If we manage to consolidate these key provisions ... then Ukraine will be in a position to actually fix its current status as a non-bloc and non-nuclear state in the form of permanent neutrality,” Ukrainian negotiator Oleksander Chaly said.

Scavenging in ruins
More than a month into the biggest attack on a European nation since World War Two, more than 3.9 million people have fled abroad, thousands have been killed and injured, and Russia’s economy has been pummelled by sanctions.

In Mariupol, besieged by Russian forces, nearly 5,000 people have been killed, according to figures from the mayor which cannot be verified.

In parts now held by Russian troops, the few visible residents appeared ghostlike among charred and bombed apartment blocks. One little girl in a pink puffy coat and yellow knitted hat was playing with a stick in the ruins as explosions crackled in the distance. Two youths scavenged through rubble with a wheelbarrow.

“We are eight people. We have two buckets of potatoes, one bucket of onions,” said Irina, an engineer, in her apartment where windows had been blasted out. Her group boiled soup on a makeshift stove in the stairwell.

An older man named Gennadiy left his wrecked building, hunched over with his belongings wrapped in a bedsheet on his back. “It is very scary to be left with nothing,” he said.

Elsewhere, however, Ukrainian forces have made advances, recapturing territory from Russian troops on the outskirts of Kyiv, in the northeast, and in the south.
One recaptured area on a road toward the village of Rusaniv was littered with burnt-out tanks and bits of Russian uniforms. Surrounding houses were destroyed. A Ukrainian in uniform was digging a pit to bury charred remains of a Russian soldier.

In the southern city of Mykolaiv, a missile blasted a hole through the main administrative building. Authorities said at least seven people were killed and 20 injured, including 18 pulled from the rubble.

Russia’s Defense Minister Sergei Shoigu said Russia had largely completed the first phase of its assault, had degraded Ukraine’s military capabilities and would now focus on areas claimed by separatists in the southeast.

Moscow made a similar declaration late last week, interpreted in the West as a sign it was giving up on initial aims of toppling the Kyiv government.
Russia calls its mission a “special operation” to disarm and “denazify” Ukraine. The West says it launched an unprovoked invasion.

Russian billionaire Roman Abramovich was at the venue of the negotiations. The Kremlin said he was there as a go-between but not part of Russia’s delegation. Russia, the United States and Ukraine have all played down media reports that he may have been poisoned while on an earlier peace mission.