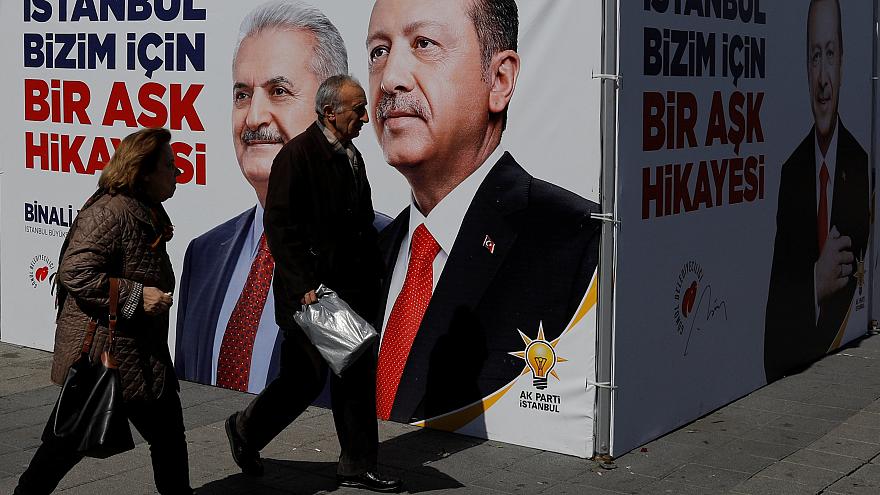 Erdogan, the local elections and Syria

The results of the municipal elections in Turkey (March 31, 2019) show that politics sometimes takes in what the politician thinks it gives, and may hit him from his safe haven, and lose in terms of his expected victory. The Turkish President Rajab Tayeb Erdogan has misunderstood the electoral and political situation inside Turkey, and he exaggerated in assessing his power, and was in hurry to announce victory even before the elections are held. He confirmed in what is can not be decided, the ballot box and the Syrian crisis as both are the political and electoral polemics inside Turkey.
Erdogan said two days before the municipal elections in Turkey, that after the election he will absolutely solve the Syrian file "either through negotiations, if possible or in the battle field."

Erdogan's talk of a "solution" in Syria was not only a kind of electoral promise to win the votes of Islamists and conservative nationalists, but rather a kind of early or pre-announcement of winning the election as well. As it is well known, he treated the Syrian crisis from the start as a Turkish "internal affair", and it was one of the reasons for his victory in electoral and constitutional entitlements.

Erdogan referred in his statements to two main things: the first, in terms of time, that is: "post-election," as if the elections a boundary between what was before and what will come after. The second thing is the "solution" in Syria. Observers should not expect too much to be clarified but in terms of the elections in which Erdogan’s party has lost its economic and administrative capitals: Istanbul and Ankara.

Erdogan believed that his involvement in Syria was still a winning card in the debates and electoral contests at home, so his talk was about a "solution" through negotiations or war, which meant two things:

The first is the Kurds. The talk about them came in the context of threats and intimidation. Erdogan said: "Did not we teach them a lesson in the terrorist corridor, north of Syria, in Afrin? Yes, we did, and now, if the situation is not set by the United States in the east of the Euphrates, we will teach them the lesson and we have completed all our preparations." (30 March).

The second is to refer to his next meeting with President Putin in Moscow on April 8. The two presidents are expected to "prove" what the two sides agreed at the seventh meeting of their joint strategic planning group, and their foreign ministers, Sergei Lavrov and Mouloud Javishoglu at their joint press conference on March 29, in particular the implementation of the Sochi Agreement on Idlib and the Constitutional Commission, and the continuation of dialogue and deliberation between the two sides on the Kurds and East Euphrates.

Erdogan believed he has many papers in the Syrian war. He has received a Russian appreciation that he is committed to the Sochi agreement with Putin in September; he sends patrols in Idlib and its environs, and then at Tal Rifat, 35 kilometers north of Aleppo.

Also, the Russians allowed the Turkish jets to fly over some areas of northern Syria, and Erdogan obtained the exclusive right to represent the Syrian opposition regarding the constitutional committee. He also got the Russian (and somewhat Iranian) understanding of his concerns about the Kurdish administration in eastern Euphrates. Furthemore, the United States continued to express its appreciation and understanding to his concerns and security interests in the east of the Euphrates. That was enough from Erdogan's perspective to conclude that after the elections he would "inevitably solve" the Syrian file.

Erdogan believed that achieving some gains in the Syrian crisis could be a substitute for solving the chronic and simultaneous problems inside Turkey, and in sectors that can not be postponed: economic crises, deteriorating living conditions, increasing social tensions, escalating security pressures, suppressing dissidents, Media, etc. But things were different, changes in the voters' mood and politics in Turkey were changing, or his ability to control the voters reactors seemed less, as the election results showed. Those results must have been heavy on Erdogan and he will be hurry up to fix it before things get worse for him.

Based on the experience of the past years, Erdogan is expected to act as if he won the election: he will be more hostile to the opposition and will depend on the "deep state" or the "parallel government" he has managed to establish during his long years of rule.

Turkey's attitude towards the Syrian crisis will not change significantly, at least in the near future, but Erdogan will show a relatively greater commitment to the Astana process, which it gathers him together with Iranian President Hassan Rowhani and Russian President Vladimir Putin, as well as for the Sochi agreement Between him and Putin about Idlib, while he will keep his bet on Washington, as a force of balance, and hope for his healing!.

*Akil Mahfoud is a Syrian Academic and researcher based in Damascus.

Appeared first in Arabic in Damascus Center for Research and Studies- www.dcrs.sy