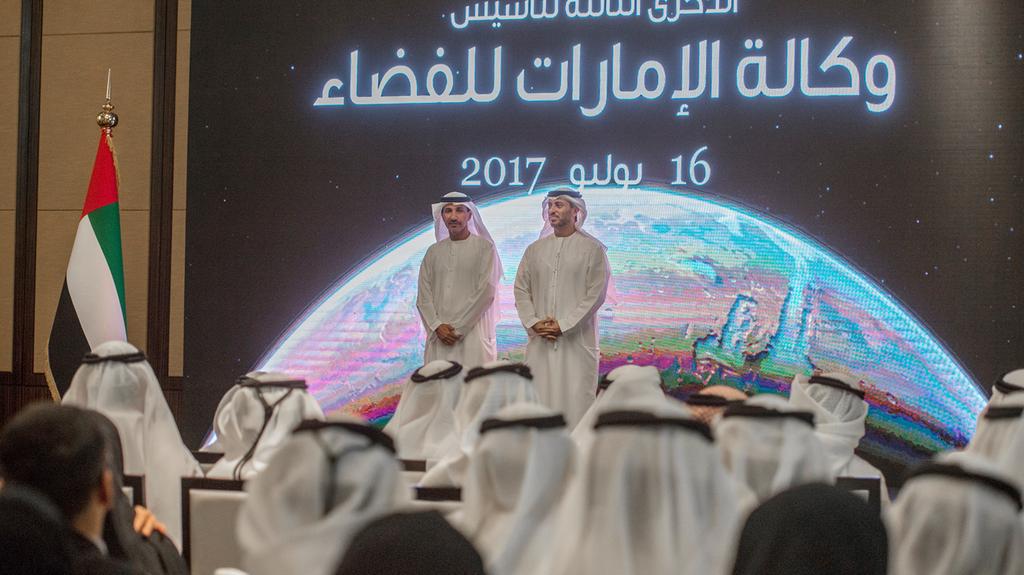 The Mohammed bin Rashid Space Centre, MBRSC, in cooperation with the Federal Youth Authority, FYA, has adopted the logo for the first Arab and Emirati mission to the International Space Station, ISS, on 25th September.

The mission is part of the UAE Astronaut Programme, launched by His Highness Sheikh Mohammed bin Rashid Al Maktoum, Vice President, Prime Minister and Ruler of Dubai, and His Highness Sheikh Mohamed bin Zayed Al Nahyan, Crown Prince of Abu Dhabi and Deputy Supreme Commander of the UAE Armed Forces, in 2017, to train and prepare a team of Emiratis to be sent to space for various scientific missions.

MBRSC highlighted that the logo was designed in cooperation with FYA. It reflects the creativity of Emirati youth, as well as their talent and contribution to the future of the UAE and its pioneering achievements in space.

Shamma bint Suhail Faris Al Mazrui, Minister of State for Youth Affairs and Chairperson of the Federal Youth Authority, said, "We are happy to collaborate with MBRSC in designing the logo for the first Arab and Emirati mission to ISS, with the participation of Emirati youth".

Al Mazrui added that entrusting Emirati youth to design the logo shows the levels of trust and interest of our wise leadership and its continuous support to young people in various fields and disciplines. This has contributed to making Emirati youth a global model for leadership, creativity, and excellence.

"We strongly believe in the youth’s vital role, as well as in their creativity and their innovation in achieving the objectives and the vision of our wise leadership and turning it into a tangible reality," the Minister explained. "The contribution of Emirati youth to design the logo for the first Emirati mission to ISS, aims to create a distinctive identity that expresses the UAE's leadership in the field of space, as well as its culture and heritage," she continued.

Hamad Obaid AlMansoori, Chairman of MBRSC, said, "The mission’s logo reflects the ambition of the late Sheikh Zayed bin Sultan Al Nahyan for the Emirati youth to explore space, especially as he believed in their abilities and was keen on the presence of the UAE in this sector and having an Emirati space sector. Hazzaa AlMansoori will carry ‘Zayed’s Ambition’ with him into space, wearing the logo on his shoulder, during his historic mission to ISS; a moment of pride for every Emirati and every Arab".

"MBRSC’s cooperation with FYA comes within the framework of our shared vision to empower youth and enhance their capabilities in various disciplines and provide them with an environment conducive to innovation and creativity. At MBRSC, we work according to an integrated strategy to foster creativity within Emirati youth," added AlMansoori.

Emirati astronaut Hazzaa AlMansoori will have the mission’s logo with him during his mission to ISS in September.

The UAE Astronaut Programme is funded by the ICT fund of the Telecommunications Regulatory Authority, TRA. Launched in 2007, this fund, which is the first of its kind in the Arab world, aims towards supporting research and development within the ICT sector in the UAE, helping it to grow into a nationally significant industry with a leading place in the world.