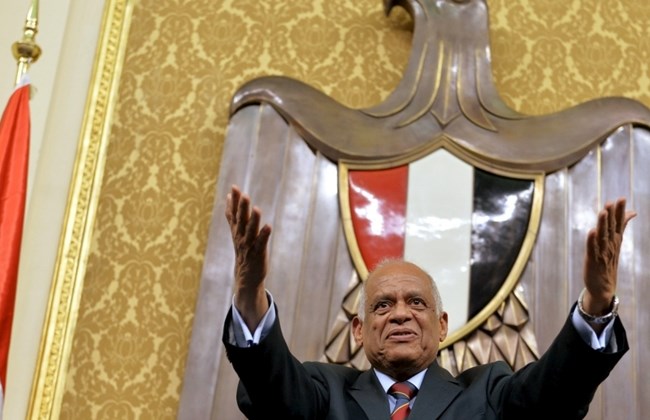 Ali Abdelaal greets members of parliament after he was elected the speaker of Egypt's parliament during the procedural and opening session at the main headquarters of the parliament in Cairo, Egypt, January 10, 2016. REUTERS/Stringer

THE LEVANT NEWS — CAIRO: Egypt’s first legislature in more than three years, a 596-seat chamber packed with supporters of President Abdel-Fattah al-Sisi, held its inaugural session Sunday, signaling the completion of a road map announced after the 2013 military overthrow of an Islamist president. The assembly, elected in November and December, is the first legislature since Sisi, as military chief, led the 2013 ouster of President Mohammad Morsi following mass protests against the Islamist leader and his Muslim Brotherhood. The new parliament replaces one dominated by Islamists that was dissolved by a court ruling in June 2012.

The new chamber’s first task will be to ratify some 300 presidential decrees issued by Sisi since taking office in June 2014 and Interim President Adly Mansour before him. Under the constitution, these decrees must be ratified within 15 days starting from the date of the inaugural session. Failure to do so will result in the automatic repeal of the laws.

The decrees include a law severely restricting street demonstrations and a terror law that curbs press freedoms and gives police sweeping powers.

Sisi vowed Sunday to support the chamber and respect the separation of powers, according to a statement issued by his office. Under the constitution adopted in 2014, perhaps Egypt’s most liberal, the legislature has the right to impeach the president and sack the prime minister, albeit under strict conditions.

A pro-Sisi coalition in parliament, called “Supporting Egypt,” enjoys the support of 366 lawmakers, according to its leader, retired army general, Sameh Seif al-Yazl. It is designed to ensure continued support for the president and thwart any attempt to hinder his policies.

French-educated law professor Ali Abdel-Al – a contributor to the drafting of the constitution and election law – was elected speaker of the legislature, winning 401 votes, nearly 10 hours into the marathon session.

“I hope this legislature brings about the democracy that people have hoped for,” Bahaa Abu Shaqah, the interim speaker, said in parting comments before giving up the speaker’s seat to Abdel-Al.Addressing the assembly, Abdel-Al thanked Sisi, whom he described, to a standing ovation and applause, as the “leader president” and “leader of the march” – lofty titles typically associated in the Arab world with authoritarian leaders. “I will always be defending democracy and the national principles of the Jan. 25 and June 30 revolutions.”

As speaker, Abdel-Al is now first in the line of succession in case of the death or permanent incapacity of the president, until new elections are held.

He quickly moved to impose his authority over the traditionally chaotic and unruly body. “I know the constitution by heart. I wrote this constitution, nobody holds it up to me,” he barked at a lawmaker who spoke out of turn to insist parliament was constitutionally obliged to elect deputy speakers in its first session after Abdel-Al moved to adjourn it.

After Morsi’s overthrow, Sisi announced three steps to take Egypt back to democratic rule: The adoption of a new constitution and presidential and parliamentary elections. “I express my sincere thanks and appreciation toward the leader of the way, President Abdel-Fattah al-Sisi,” Abdel-Al said upon assuming office. “I will always be a defender of democracy and the principles of the Jan. 25 and June 30 revolutions. I will also be a protector of the people’s army and defender of its unity.”

Sisi, who is expected to address the chamber later this month, has since his election in 2014 been focused on restoring security and reviving the nation’s ailing economy.

Egypt is grappling with an increasingly potent Islamist insurgency centered in the northern part of the Sinai Peninsula, which claimed the downing of a Russian passenger plane over Sinai in October that killed all 224 people on board and led to widespread flight cancellations, dealing a major blow to the vital tourism industry.

Egypt’s economy has been kept afloat by billions of dollars from its oil-rich Gulf Arab backers injected into its emptying coffers. Still, the local currency, the pound, has been under growing pressure, tourism battered from years of turmoil and double-digit inflation, currently running at nearly 11 percent.