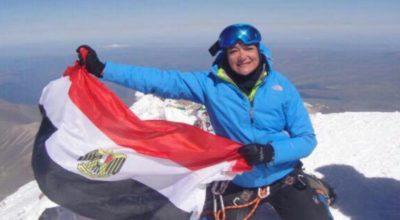 Extreme climber, marathon-runner and mountaineer Manal Rostom has become the first Egyptian woman to reach the summit of Mount Everest.

Rostom reached the world's highest peak earlier this week, and in the weeks beforehand shared a social media video on her thoughts and fears ahead of the final push to the top.

Rostom took two months to complete her journey to the top of the tallest mountain on Earth, which stands 8,849 meters tall.

Rostom has previous taken part in marathons around the world including in New York City, Berlin, Chicago, Boston and London, as well as the Great Wall of China.

She has also previously climbed some of the world's other highest mountain summits, namely Mount Kilimanjaro, Mount Kenya and Elbrus, and made it to the Mount Himalaya base camp in 2016.

In 2019, Nike chose Rostom to be the first veiled Egyptian Arab woman to serve as the face of their international women's sportswear brand.