Americans are turning out in record numbers to cast their early votes or mail their ballots for the 2020 election, with almost 12 million citizens having voted already.

With three weeks to go before Election Day on November 3, 11.8 million Americans have already voted, the US Election Project says. That compares to only 1.4 million at the same time in 2016, the project’s database shows. 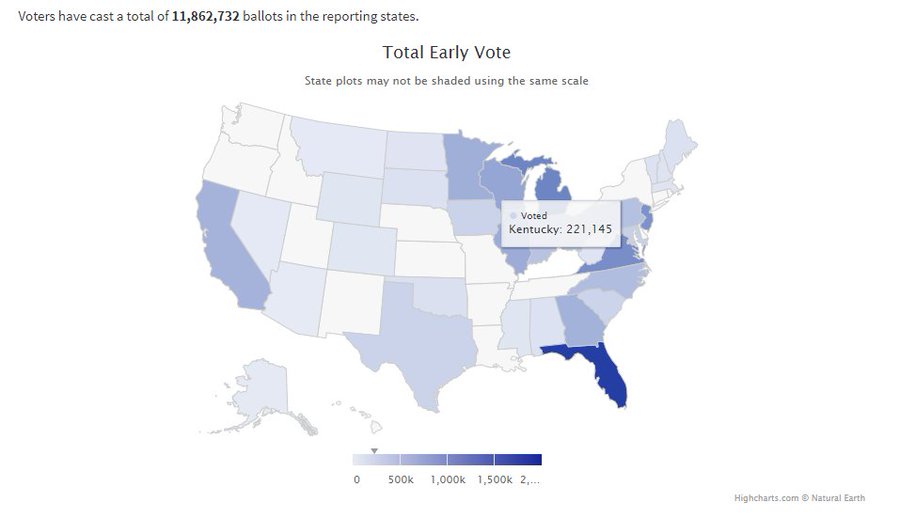 In Texas, where early voting and ballot drop-offs started on Tuesday, record numbers were reported in Harris county, Houston’s largest. “We’ve had a record first day of early voting in Harris county,” the regional clerk reported. “So far over 68,000 votes have been cast, beating the 2016 record.”

A long line of cars queued to drop off their ballots at the only drop-off site for a county of 4.7 million, after the voting rights group lost their legal battle to the Republican Texas Governor, Greg Abbott.

A federal appeals court ruled late on Monday that Texas could limit the drop-off sites to one location for each of its 254 counties. Georgia, which started early voting on Monday, set a record with more than 120,000 voters turning out on the first day, the secretary of state’s office said.

US President Donald Trump, who is tied with Democratic nominee Joe Biden in Georgia polls, will head to the historically Republican stronghold on Tuesday evening. Other states such as Kentucky and Virginia reported technical glitches in the voting process.

A cut cable in Virginia shut down voting registration websites on Tuesday, which was the last day for voter registration. The Virginia Department of Elections said technicians were able to resolve it after five hours.

All 50 states will have ballots available for early voters by the end of this week. Minnesota, Virginia, South Dakota and Wyoming were among the first to start. Kansas, Louisiana, North Carolina, Rhode Island and Tennessee will open early voting polls this week.

A high turnout could benefit Mr Biden, especially in states where former nominee Hillary Clinton lost to Trump by a thin margin in 2016, such as Michigan, Wisconsin and Pennsylvania. But Trump is trying to rally his base and in some cases encouraged supporters to vote twice, which is considered a felony.

The two candidates are expected to take part in a last debate on October 22, after an online event was cancelled this week.