By Arthur Blok
Busy days for Erdogan’s lawyers. In the same week late October Charlie Hebdo featured a cover with a cartoon of the Turkish leader in his underwear on the cover, Erdogans lawyers filed a criminal complaint over Wilders’ ‘insulting content’ of the president.

The complaint, submitted to the Office of the Ankara Chief Public Prosecutor, claimed Wilder’s remarks were “criminal libel” and argued that it did not fall under freedom of expression. Under Turkish law, insulting the president constitutes a crime.

“I have a message for President Erdogan and it is very simple,” Dutch prime minister Rutte said. “In the Netherlands we consider freedom of speech to be the highest good and that includes cartoons by politicians.” 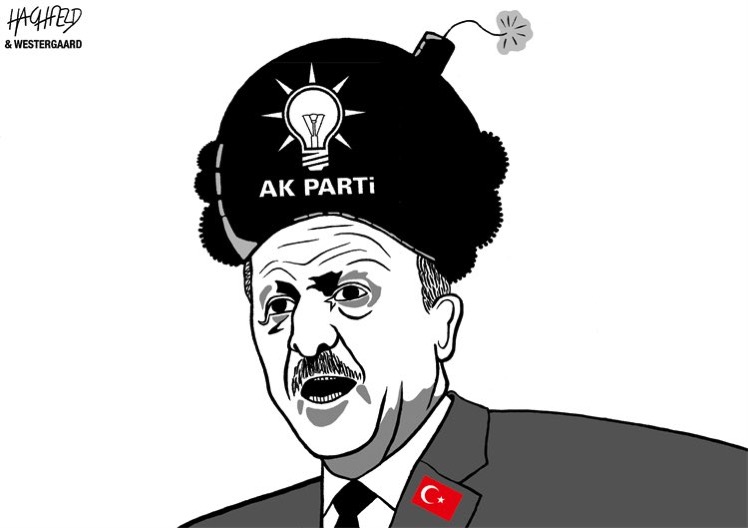 Geert Wilders
Wilders, an anti-Islam politician, shared a black-and-white cartoon depicting Erdogan wearing a bomb-shaped hat with the logo of his Justice and Development Party (AKP). Wilders has been the leader of the Party for Freedom (Partij voor de Vrijheid – PVV) since he founded it in 2006 and is parliamentary leader of his party in the House of Representatives. He is best known for his criticism of Islam and the EU.

In a AKP party meeting, Erdogan reportedly called Wilders a “fascist”. “Fascism is not in our book, it’s in your book. Social justice is in our book,” Erdogan was quoted by Anadolu Agency as saying.

After news of the lawsuit broke out, Wilders took to Twitter to respond to Erdogan’s remarks, calling the Turkish leader a “loser” and “dictator”. He asked Rutte to cut diplomatic ties with Turkey.

Charlie Hebdo
Less than 48 hours later later Erdogan ordered Turkish politicians to collectively condemn a cartoon that was published on the cover of French satirical magazine Charlie Hebdo. The suggestive caricature is depicting the Turkish president sitting in a white T-shirt and underpants, holding a canned drink along with a woman wearing a hijab.

Erdogan called Charlie Hebdo, which was hit by an Islamist terror attack five years ago when it published cartoons of the prophet Mohammed, an “immoral magazine”.

Erdogan is acting more and more like an old-fashioned dictator who can not digest any critics. In September Erdogan was really upset with Greek newspaper Dimokratia that published an article titled ‘Siktir Git Mr. Erdogan,’ which means ‘fuck off’ in Turkish.

The angry Turkish leader ordered his government to be very upset and told his Foreign Minister to summon Greece’s ambassador over the headline in the newspaper. The headline ‘fuck off Mr. Erdogan’ appeared next to a photo of Erdogan on the front-page of the paper.

For now Erdogans attention seems to be shifted to Wilders. The 64000 dollar Question is: who will be next?