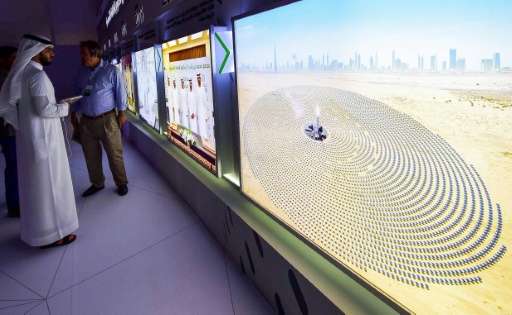 The cost of producing solar power in Dubai is the lowest in the world today.
So declared Shaikh Mohammad Bin Rashid Al Maktoum, UAE Vice President and Prime Minister and Ruler of Dubai, after he broke ground on the world’s biggest Concentrated Solar Power (CSP) project on Sunday.

The 700MW project represents the fourth phase of a sprawling solar park outside Dubai, dubbed as the world’s largest single-site solar park, located near Al Qudra.
“The cost of producing solar power in Dubai is the lowest in the world today,” he tweeted, adding: “Our goal is for 75% of Dubai’s energy needs to be met by clean power by 2050, a goal we gladly embrace. Sustainable development is essential for the prosperity of our and future generations.”

In terms of per-unit cost, the new CSP project, valued at Dh14.2 billion, has achieved the world’s lowest Levelised Cost of Electricity (LCOE) of 7.3 US cents per kilowatt hour (kW/h), according to Dewa.

This Dh14.2-billion project is projected to achieve the world’s lowest Levelised Cost of Electricity (LCOE) of 7.3 US cents per kilowatt hour (kW/h) and is designed to power 270,000 homes.

Shaikh Mohammad was present along with senior UAE officials during the groundbreaking of the fourth phase of the solar park.
“We will continue pursuing ambitious investments with an emphasis on projects that have a positive impact on people’s lives. Clean and renewable energy is key to sustainable development and the #UAE has set an example for its rapid adoption,” Shaikh Mohammad said on Twitter on Monday.
Saeed Mohammad Al Tayer, managing director and CEO of the Dubai Electricity and Water Authority (Dewa) was also present along with other senior officials.
The CSP project is expected to provide clean energy to over 270,000 homes in Dubai, estimated to reduce 1.4 million tonnes of power generation-related carbon emissions per year.
Once completed, the Emirati green energy landmark project will altogether generate 1,000 megawatts of clean energy by 2020 and 5,000MW by 2030, with total investments of Dh50 billion (about $13.5 billion).

The new Dh14.2-billion CSP project will be commissioned in stages, starting fourth quarter of 2020.

260 metres: Height of the solar tower, the world’s tallest such tower. It will also have the world’s largest thermal storage capacity.
43 sqkm: Size in square kilometres of the fourth phase, equivalent to more than 8,000 football fields.
270,000: Number of homes to be powered by the new project.
7.3 cents: Cost per unit of electricity (kwh) from this power project, the lowest cost of electricity in the world.
464MW: The solar park is also designed to provide the Expo 2020 Dubai site with a dedicated 464MW of clean energy, making it the first Expo in the world to be solely powered by solar energy.

2012: Shaikh Mohammad Bin Rashid launches the largest single-site solar park in the world.
October 22, 2013: The 13MW first phase becomes operational. It generates 28 million KW hours of electricity and saves 15,000 tonnes of carbon emissions annually. It has 152,000 solar panels.
June 2016: Contract for the 800MW third phase awarded to Masdar-led consortium. It will be implemented in stages until 2020.
March 20, 2017: Shaikh Mohammad inaugurates the 200MW second phase, which generates clean energy for 50,000 homes and saves 214,000 tonnes in carbon emissions. It has 2.3million solar panels.

Previous Sharjah Arab Children Forum to be held from March 24 to 28
Next Dubai’s non-oil foreign trade rises to Dh1.3tr in 2017