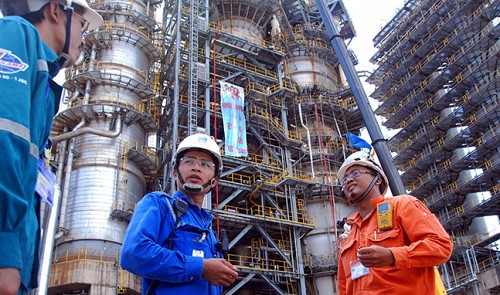 The drilling ship at the center of a row between Vietnam and China over oil prospecting in disputed waters in the South China Sea has arrived in waters off the Malaysian port of Labuan, shipping data in Thomson Reuters Eikon showed on Monday.

Drilling by the Deepsea Metro I ship was suspended in Vietnam's Block 136/3 last month after pressure from China, which says the concession operated by Spain's Repsol overlaps the vast majority of the waterway that it claims as its own.

The ship, used by Norway's Odfjell Drilling Ltd., was reported to be in Labuan at 9.17 a.m. (0117 GMT), according to shipping data in Thomson Reuters Eikon. It was last recorded at the drilling site on July 30.

Odfjell Drilling did not respond immediately to a request for comment.

The row over the drilling inflamed tensions between Vietnam and China, whose claims in the South China Sea are disputed by five Southeast Asian countries.

Repsol said last month that drilling had been suspended after the company spent $27 million on the well. Co-owners of the block are Vietnam's state oil firm and Mubadala Development Co of the United Arab Emirates.

The block lies inside the U-shaped "nine-dash line" that marks the area that China claims in the sea.

China had urged a halt to the exploration work and a diplomatic source with direct knowledge of the situation said that the decision to suspend drilling was taken after a Vietnamese delegation visited Beijing.

Vietnam has never confirmed that drilling started or that it was suspended, but last month defended its right to explore in the area.

Vietnam has emerged as the most vocal opponent of Chinese claims in the South China Sea, where more than $3 trillion in cargo passes every year, and China was also angered by Vietnam's stand at a regional meeting last week.

Vietnam held out for language that noted concern about island-building and criticized militarization in South China Sea in the communique from foreign ministers of the Association of South East Asian Nations (ASEAN).