Breaking News
Home / News / ‘Do you think they’ll get the president?’: Kushner is reportedly worried as the Russia investigation heats up 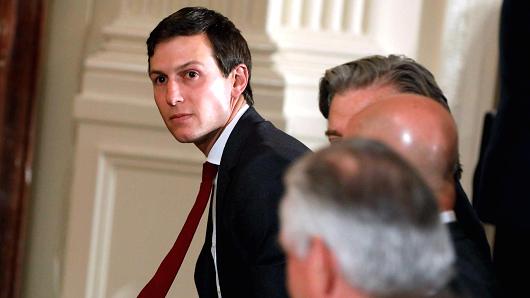 ‘Do you think they’ll get the president?’: Kushner is reportedly worried as the Russia investigation heats up

As part of his investigation, Mueller is looking into whether members of the Trump campaign colluded with Moscow to tilt the election in his favor.

After the indictments against Gates and Manafort were unsealed, Kushner reportedly asked a friend, “Do you think they’ll get the president?”

Trump is said to be under investigation for obstruction of justice, stemming from his decision to fire James Comey as FBI director in May.

The White House initially said Trump fired Comey because of the way he handled the FBI’s investigation into former Secretary of State Hillary Clinton’s use of a private email server to conduct government business. Later, however, Trump told NBC’s Lester Holt that “this Russia thing” had been a factor in his decision.

He also reportedly told two high-ranking Russian officials that firing “nut job” Comey had taken “great pressure” off of him. The alleged conversation took place in the Oval Office one day after Comey was dismissed.

In addition to building an obstruction-of-justice case against Trump, Mueller is also reportedly looking into the president’s role in drafting an initially misleading statement his son, Donald Trump Jr., issued in response to reports in July that he met with a Kremlin-connected lawyerat Trump Tower in June 2016.

The statement had to be amended several times, after it emerged that Trump Jr. took the meeting when he was promised dirt on then Democratic nominee Hillary Clinton as “part of Russia and its government’s support for Mr. Trump.”

Kushner was a key player during both events. He attended the Trump Tower meeting in June 2016, along with Manafort and Trump Jr., and he “pushed” Trump to fire Comey, according to The Wall Street Journal.

He was also with Trump in Bedminster during a weekend in early May, when Trump put together a draft letter laying out all the reasons he wanted to fire Comey. Though the letter was never ultimately sent after White House counsel Don McGahn strongly advised against it, Trump fired Comey days later. The letter is now in Mueller’s possession.

Concerns about the Russia investigation and Kushner are not one-sided. Two Republicans who have spoken with Trump recently told Vanity Fair that he has been “frustrated” with Kushner’s advice, including when he pushed the president to dismiss Comey.

Trump has been “pressuring” Kushner and his wife, Ivanka, to leave Washington, DC and return to New York to avoid negative press coverage, one source close to Kushner told Vanity Fair.

But it’s unlikely he will leave the spotlight any time soon, particularly as he becomes an increasingly critical figure in the Russia investigation.