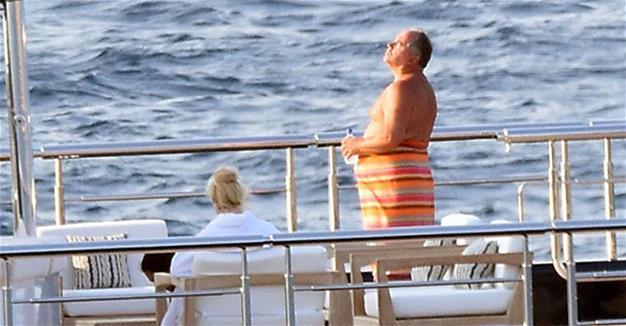 The family trust of a Russian oil-and-gas billionaire has won the right to appeal the temporary seizure in February of his $540-million superyacht, ‘Luna’, now docked in Dubai, Gulf News has learnt.

With nine decks, two helipads, 10 VIP rooms and one of the world’s largest swimming pools on a superyacht, Luna is one of the largest and most expensive private vessels on the planet.

According to an online ship tracker service, Luna is at dry docks in Port Rashid in Dubai.

The business tycoon is embroiled in Britain’s costliest divorce with his ex-wife Tatiana Mikhavilovna Akhmedova, who won a British court order to seize his assets as part of her London High Court $641-million divorce settlement award two years ago.

Tatiana Akhmedova’s lawyers asserted earlier this year that she has yet to receive proceeds from the divorce settlement and parties working on her behalf have been combing the globe for her husband’s assets.

Agents acting on behalf of the British courts petitioned the DIFC Courts to take control of the yacht and the Dubai court ruled on February 8 to ‘freeze’ Luna and the ship was seized while moored in Dubai. A further “enforcement order” by the DIFC Courts is needed before Luna could be taken legally and auctioned off to collect proceeds for the divorce award.

I provided generously for my ex-wife, enabling her to live a lavish lifestyle … Yet incredibly, 12 years later, London lawyers issued proceedings in the English High Court.”

In an exclusive interview with Gulf News, Akhmedov argued that he and his ex-wife divorced in Russia and he queried the legitimacy of the UK’s intervention and subsequent legal reach across international boundaries which have led to the temporary seizure of Luna.

The tycoon said, “My wife and I were Russian citizens when we married in Russia. To be clear, we were Russian citizens, not British citizens, when our seven-year marriage was formally dissolved in Russia in 2000 … from that moment, I provided generously for my ex-wife, enabling her — as has been well documented — to live enjoy a lavish lifestyle as the mother of my two eldest sons. Yet incredibly, 12 years later, London lawyers instructed by my ex-wife issued proceedings in the English High Court.

“This action entirely disregarded the fact that these assets had been placed in a family trust to be held for the benefit of all my children and grandchildren, my siblings and their families. It also ignored the many millions of dollars I have given to charitable causes,” Akhmedov told Gulf News.

Sources close to the trust told Gulf News that trust managers will fight for the return of Luna and are providing for the 50 crew members still in Dubai as a result of the ship’s seizure.

“In the meantime, the trust, as owner of the vessel, will continue to exercise its full duty of care towards all crew,” a source told Gulf News.

Timeline: The case so far

December 2016: Tatiana Akhmedova was awarded a $641-million divorce settlement by the British courts against her ex-husband Farkad Akhmedov in what was believed to be at the time the largest single divorce settlement in the UK history.

February 8, 2018: The Dubai International Financial Centre Courtsordered the ‘freezing’ of Luna to prevent the ship from leaving Dubai.

April 10: The DIFC Courts granted permission to Akhmedov’s trust, Straight Establishment, to seek appeal of the original ‘freezing’ order and ask for an “oral hearing” before the court to argue their case.

Erdogan wants French people to get rid of Macron