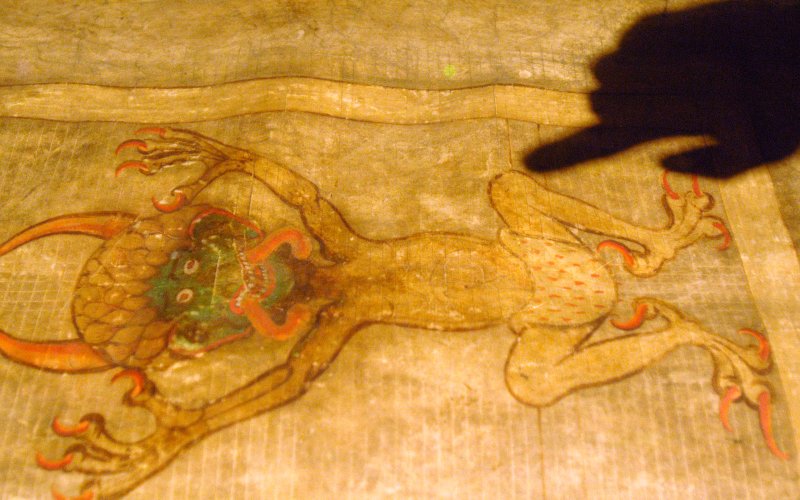 Did the Devil Really Write This Bible?

What is the secret to the longevity and brilliance of the largest surviving medieval manuscript? Lucifer himself is said to have made it.

By CANDIDA MOSS for The Daily Beast — We have all heard that the Bible is the Word of God—but what if it were actually the work of Satan? Sure, there are various heretical groups throughout history that have thought that parts of the Bible were false, but in the case of the world’s largest surviving medieval manuscript some believe that Satan himself is the book’s scribe.
While the technical name for the manuscript is Codex Gigas (literally “giant book” in Latin), it is better known as the ‘Devil’s Bible.’ It is currently housed in the National Library in Stockholm, but it was created in the twelfth century in Bohemia (the modern Czech Republic), possibly at the Benedictine monastery of Podlažice. It was transported to Sweden as part of the booty seized at the conclusion of the Thirty Years’ war in 1648. It would have taken two men to steal it, as the book is around a meter tall and weighs almost 165 pounds.
It’s not just the scale of the book that make it unusual, but also its contents. In addition to the Vulgate (the Latin version of the Bible), it contains a copy of the Jewish historian Josephus’s Jewish Antiquities, Isidore of Seville’s Etymologies, ancient medical texts, and a copy of The Chronicle of Bohemia by Cosmas of Prague (1050). Ten pages are missing, however, and as all of the works contained in the codex are complete, there’s some speculation about what they contained. Some say they held a transcription of a prayer to Satan, while scholars—the spoilsports—hypothesize they held the rules of the monastic community from which the book originated.

It is known as the Devil’s Bible for two reasons. The first is apparent to anyone who visits it: the recto of folio 290 (that’s the reverse side of the 290th leaf in the book) is blank except for a large half-meter tall illustration of the devil. The Devil is pictured with a green face, talons, and horns, crouching in a squat, almost as if he were in a yoga pose.
The second reason for its name is due to the story of its composition. According to legend, the enormous book was the work of a single monk who had been sentenced to death by inclusion (being walled up alive). In an effort to delay or forestall his execution, the monk promised to produce in a single night a manuscript that would bring glory to the monastery. The task, it is said, was too enormous, and he turned to Satan for help. The Devil completed the manuscript, presumably in exchange for the monk’s soul, and out of gratitude to Satan the monk added the large illustration of the Prince of Darkness. The monk survived but became remorseful and turned to the Virgin Mary, asking her for help. The Virgin agreed, but just as he was on the verge of being freed from his pact, he died.
Legend has it that ill fortune befalls anyone who possesses the manuscript. A nineteenth-century collection of anecdotes tells a macabre version of Night at the Museum in which a porter at the national library where the book was housed was locked in for the night after falling asleep in the main reading room. When he woke up he saw the books moving around of their own accord and dancing. A large broken clock suddenly sprang back to life and started to chime the hours. In the morning the porter was found crouched under a table in terror and spent the rest of his days in an asylum.
Scientific testing of the book revealed that it does appear to be the work of a single scribe: the handwriting is remarkably consistent and uniform throughout. As you might expect, it’s unlikely to have been produced in a single night: a National Geographic study concluded that a single person working 24 hours a day (without the help of a malevolent demon) would take five years to complete it. Assuming that that person also ate and slept, it is estimated that it would take approximately 25-30 years to complete.
The origins of the story of the monk who sold his soul to the Devil are unknown, but it is remarkably similar to the medieval tale of Theophilus the Penitent. Theophilus was a sixth-century archdeacon who, with the help of a necromancer, made a pact with the devil that allowed him to become bishop. He later repented of his decision, beseeched the Virgin Mary for help, fasted for seventy-three days, and died (from joy, or perhaps starvation) once his contract with the Devil was burned.
The story was popular in medieval art from the eleventh century onward and served as the inspiration for the legend of Dr. Faustus. And it’s likely that the same thing has happened with the Devil’s Bible. The application of this legend to Codex Gigas is really a sign of how inspiring the book is: it is so remarkable that people imagined that it must have been made with supernatural help.

Satanic inspiration doesn’t stop here. There are numerous other pieces of art for which he is rumored to have served as a muse. While he has yet to receive a shout-out in an Academy Award speech, rumors of demonic influence often surround exceptional pieces of work. For example, in 1713 the composer Giuseppe Tartini told a friend that his Sonata in G minor was composed after a dream in which he made a pact with the devil. In the dream, he handed the Devil his violin and the Prince of Darkness began to play a haunting melody. Tartini awoke and recaptured the melody on his violin, dubbing it the Devil’s Trill. The Sonata was Tartini’s favorite, but he said that it was vastly inferior to the one he heard playing in his dream.
And depending who you ask, the devil still works in nefarious ways. Artists including Lady Gaga, Madonna, and Paul McCartney have had accusations of Satanism leveled at them. And just a few years ago, conspiracy theories swirled about power couple Jay-Z and Beyoncé’s relationship to Lucifer because amateur sleuths believed Blue Ivy’s name spelled backwards was Latin for Lucifer’s daughter.

Tags CANDIDA MOSS Chronicle of Bohemia by Cosmas of Prague Codex Gigas Did the Devil Really Write This Bible? Podlažice

Previous What is Eurasianism?
Next China Is Supporting Syria’s Regime. What Changed?