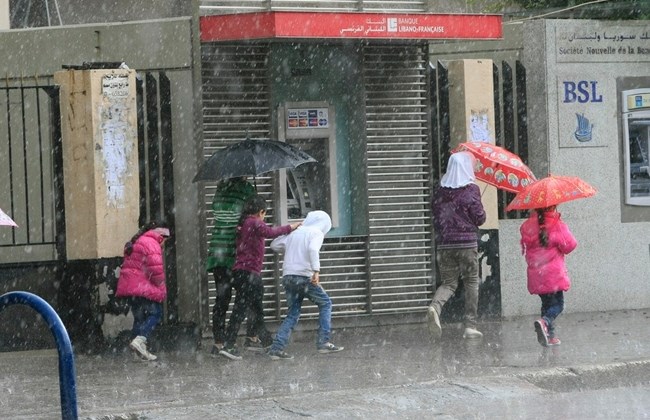 Children holding umbrellas under the heavy rain in the southern city of Sidon, Friday, January 8, 2016. (The Daily Star/Mohammad Zaatari)

Strong winds that reached up 80 km/h in the northern district of Akkar also damaged tents across an area where approximately 150 encampments are located.

The families called on the U.N. refugee agency to provide them with alternative shelters.

There are around 1.5 million Syrian refugees residing in Lebanon, mostly in makeshift camps located on the northern and and eastern borders.

The eastern side of the international Abdeh road in Akkar was also flooded by rainwater, prompting Civil Defense teams to rescue trapped commuters.

The Hadath-Baalbek road in the eastern city of Baalbek was completely blocked by thick mounds of snow, the Internal Security Forces said via Twitter.

The state-run National News Agency reported that one motorist was stranded in his car on the Hermel-Marjaheen road.

Meanwhile, the storm cut off phone lines in the towns of Tiri and Yaroun in the south Lebanon district of Bint Jbeil.

Strong winds also uprooted several trees, and destroyed greenhouses and electricity poles. Some water tanks on the roofs of buildings were blown off and smashed on the ground.

The southern Sidon port was also forced to close due to the high waves caused by the strong winds.

According to the Meteorological Department at the Rafik Hariri International Airport, temperatures will start to drop overnight, with sporadic rain and snowfall expected to continue at altitudes of 1,400 meters and above.