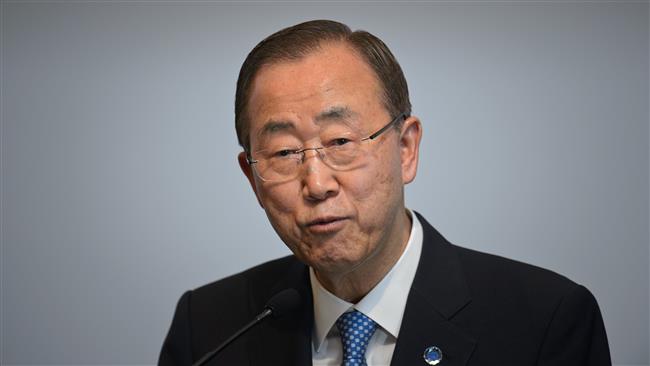 Saudi cluster bombs use in Yemen may amount to war crime: UN

THE LEVANT NEWS — UN Secretary General Ban Ki-moon has expressed concern over Saudi Arabia’s intensifying airstrikes against civilians in Yemen, warning that Riyadh’s use of cluster bombs in the capital, Sana’a, may amount to a “war crime.”

UN spokesman Stephane Dujarric told reporters on Friday that Ban is “deeply concerned” about Saudi Arabia’s intensification of airstrikes in residential areas and on civilian buildings in the Yemeni capital, including the Chamber of Commerce, a wedding hall and a center for the blind, “despite repeated calls for a renewed cessation of hostilities.”

He added that the UN chief has also received “troubling reports” that cluster munitions have been used against civilians in many locations in Sana’a.

“The use of cluster munitions in populated areas may amount to a war crime due to their indiscriminate nature,” the UN spokesperson pointed out.

A Yemeni man salvages documents from the rubble of the building of the Chamber of Commerce and Industry which was destroyed during Saudi Arabia’s airstrikes on the capital, Sana’a, on January 5, 2016. ©AFP
At least one Yemeni civilian was killed and a number of others were injured after Saudi jets pounded various districts of Sana’a, using cluster bombs early on Thursday.

“The inherently indiscriminate nature of cluster munitions makes such attacks serious violations of the laws of war,” Steve Goose, arms director at Human Rights Watch, said in a statement on Thursday.

Dujarric further said the UN chief was urging all parties to the Yemen crisis to cooperate with his special envoy Ismail Ould Cheikh Ahmed in efforts aimed at resuming peace talks as soon as possible.

The Human Rights Watch said in late May 2015 that Saudi warplanes had targeted civilians and residential areas with cluster bombs in the northern province of Sa’ada.

More than 7,500 people have been killed and over 14,000 others injured since the strikes began. The Saudi war has also taken a heavy toll on the impoverished country’s facilities and infrastructure.

Yemenis have responded with attacks against Saudi forces deployed in the country as well as targets inside Saudi Arabia.

Tags Saudi cluster bombs use in Yemen may amount to war crime: UN