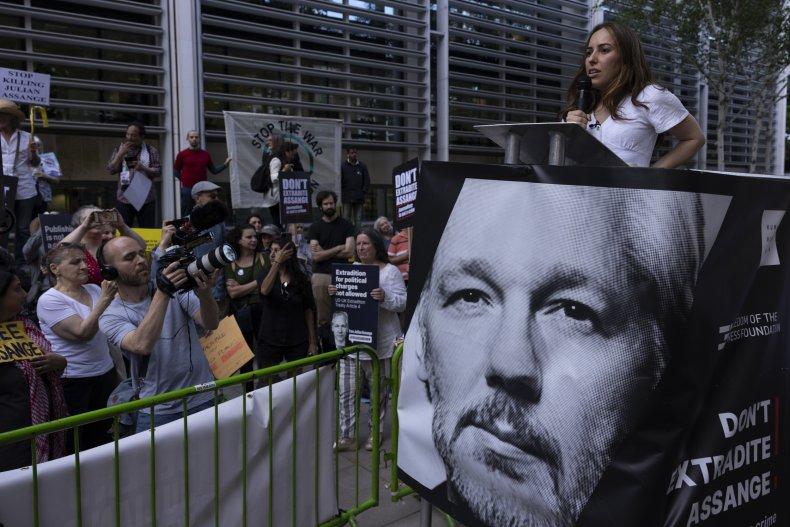 "Contents of the plaintiffs' digital devices were secretly copied by security personnel directed by the CIA," said one attorney. "This was all part of an intentional plan."

U.S. lawyers and journalists who visited WikiLeaks publisher Julian Assange during his exile in the Ecuadorean Embassy in London filed suit Monday against the Central Intelligence Agency, former Director Mike Pompeo, a CIA-linked Spanish security firm, and its CEO, alleging unconstitutional searches and seizures of their electronic devices.

"Recordings of our confidential conversations and the contents of our electronic devices were being delivered into the hands of the United States government."

Speaking at an online press conference, lead plaintiffs' counsel Richard E. Roth explained that the lawsuit—which was filed in the Southern District of New York—seeks "damages and a return of all this information, which was improperly gathered during visits" to Assange while he was living under the protection of Ecuador's government from 2012 to 2019.

"Unbeknownst to them," Roth said of the plaintiffs, "all of their equipment, when they went into the embassy, was taken, imaged, and in addition, their conversations were recorded by a company at the direction of Mike Pompeo of the CIA."

Whistleblowers from that company—Jerez de la Frontera-based U.C. Global—allege that firm founder David Morales worked with the CIA to surveil Assange and Ecuadorean diplomats at the London embassy.

"It is somewhat startling that in light of the Fourth Amendment protection we have in the Constitution that the federal government would actually go ahead and take this confidential information," Roth asserted, "some of which was attorney-client privileged, some of which were journalists', even some of which were from doctors who visited Mr. Assange."

Robert J. Boyle, a constitutional law attorney consulting with the plaintiffs on the case, said that "this is about fighting to vindicate the rights of individuals who have been aggrieved by government misconduct."

"The Fourth Amendment's protections were blatantly violated here," added Boyle. "Contents of the plaintiffs' digital devices were secretly copied by security personnel directed by the CIA and that information was turned over to the CIA. This was all part of an intentional plan."

Plaintiff Deborah Hrbek, a media lawyer who has represented WikiLeaks journalists and videographers, said that as an American attorney, "I have the right to assume that the U.S. government is not listening to my private and privileged conversations with my clients, and that information about other clients and cases I may have on my phone or laptop is secure from illegal government intrusion."

Hrbek, who visited Assange in the Ecuadorean Embassy "a few times during his stay there to discuss sensitive legal matters," explained:

On arrival there was a strict protocol—for the protection of Julian, we were told—passports, mobile phones, cameras, laptops, recording devices, and other electronic equipment were turned over to the security guards in the lobby.

We learned much later through a criminal investigation under the supervision of a court in Spain that while visitors like me were visiting with Julian in the embassy conference room the guards next door were taking apart our phones, removing and photographing sim cards, and we believe downloading data from our electronic equipment.

The boss, David Morales from U.C. Global, who appears to have been recruited by the CIA through associates of Sheldon Adelson during a visit to a tech conference, was making regular trips to Washington, D.C., to New York, to Las Vegas—reportedly to hand over thumb drives and to receive further instructions from his U.S. government handlers.

In other words, during our meetings with Julian at the embassy, recordings of our confidential conversations and the contents of our electronic devices were being delivered into the hands of the United States government.

"This is not just a violation of our constitutional rights," Hrbek added, "this is an outrage."

Berlin-based investigative journalist John Goetz, also a plaintiff in the case, said that "it's not just about my dealings with Assange. There are a whole lot of stories and a lot of information about those stories in our devices, in my devices."

The new lawsuit comes as Assange—who is charged in the U.S. with violating the 1917 Espionage Act and the Computer Fraud and Abuse Act for publishing classified documents, some of them revealing war crimes—makes his final appeal against extradition from Britain to the United States, where he faces up to 175 years in prison. It also follows a summons by a judge on Spain's highest court seeking Pompeo's testimony related to an alleged Trump administration plot to kidnap or assassinate Assange.

Roth acknowledged that the new suit is "not asking that the extradition be dropped," but said there could be a "tremendous ripple effect."

Hrbek said that "as an American citizen, as an attorney, as a human being, I and many of my colleagues including plaintiffs are absolutely calling on the [U.S. Justice Department] to drop the charges, to not counter the appeal that's being lodged based on an extradition attempt commenced by the Trump administration."

"This is a much bigger issue than the court case, [which] is about our constitutional rights," she added. "But we are categorically calling for the extradition case to be dropped."

"This very morning," he noted, "Sen. Rand Paul (R-Ky.) actually is asking for the repeal of the Espionage Act, the very act with which they're going after Julian."