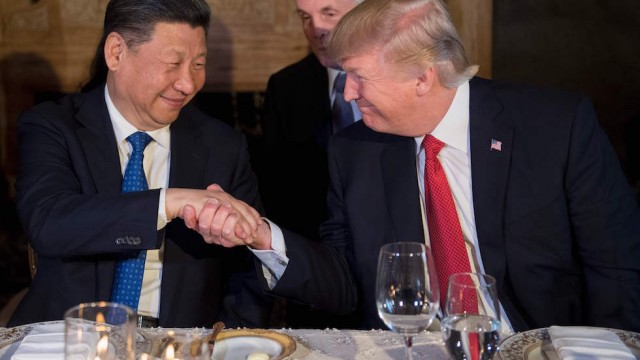 By Michael Martina and Christian Shepherd | BEIJING -- Chinese President Xi Jinping called for a peaceful resolution of rising tension on the Korean peninsula in a telephone conversation with U.S. President Donald Trump on Wednesday, as a U.S. aircraft carrier strike group steamed towards the region.

Trump's call with Xi, just days after they met in the United States, came as an influential state-run Chinese newspaper warned that the Korean peninsula was the closest it has been to a "military clash" since North Korea's first nuclear test in 2006.

The communication between the leaders underscores the increasing sense of urgency as tension escalates amid concern that reclusive North Korea could soon conduct a sixth nuclear test, or more missile launches, and Trump's threat of unilateral action to solve the problem.

Trump had ordered the USS Carl Vinson aircraft carrier group to head to the Korean peninsula in an attempt to deter North Korea's nuclear and long-range missile ambitions, which it is developing in defiance of U.N. resolutions and sanctions.

Trump pressed Xi to do more to curb North Korea's nuclear programme when they held their first face-to-face meeting in Florida last week.

He said on Twitter on Tuesday that North Korea was "looking for trouble" and the United States would "solve the problem" with or without China's help.

In their telephone call, Xi stressed that China "is committed to the target of denuclearization on the peninsula, safeguarding peace and stability on the peninsula, and advocates resolving problems through peaceful means", Chinese state broadcaster CCTV said.

Chinese Foreign Ministry spokesman Lu Kang, who said Trump had initiated the call, urged everyone to lower the tension.

"We hope that the relevant parties do not adopt irresponsible actions. Under the current circumstances, this is very dangerous," Lu told reporters at a regular press briefing.

China's Global Times newspaper said in an editorial North Korea should halt any plan for nuclear and missile activities "for its own security". While widely read in China and run by the ruling Communist Party's official People's Daily, the Global Times does not represent government policy. 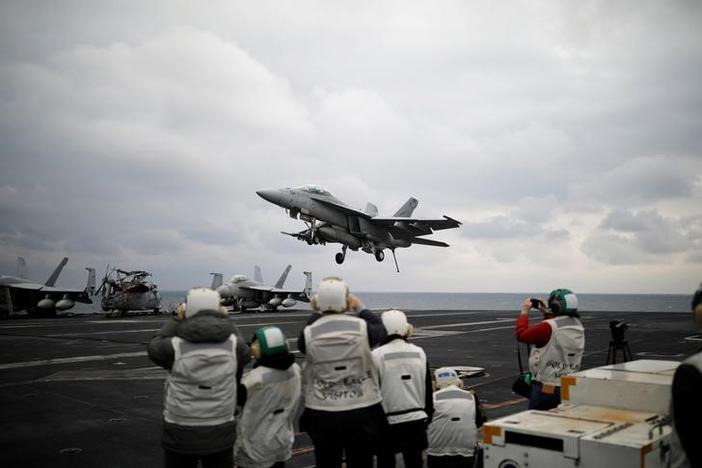 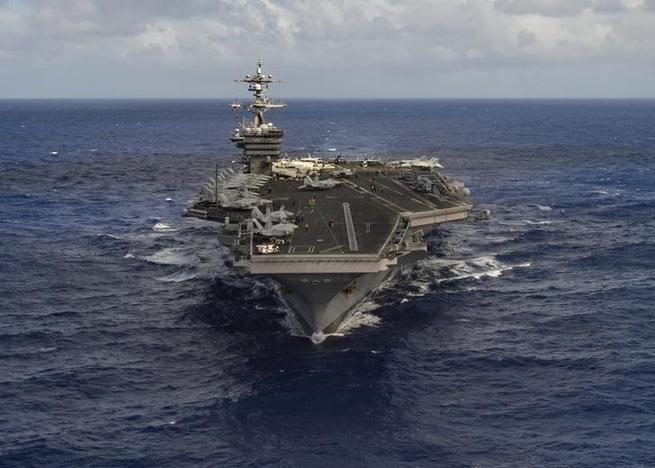 The newspaper noted Trump's recent decision to launch 59 Tomahawk missiles at a Syrian airfield in response to a deadly gas attack last week.

"Not only is Washington brimming with confidence and arrogance following the missile attacks on Syria, but Trump is also willing to be regarded as a man who honours his promises," it said.

"The U.S. is making up its mind to stop the North from conducting further nuclear tests. It doesn't plan to co-exist with a nuclear-armed Pyongyang," it said.

"Pyongyang should avoid making mistakes at this time."

The Global Times said if North Korea made another provocative move, "Chinese society" might be willing to back unprecedented sanctions, "such as restricting oil imports".

North Korean state media warned on Tuesday of a nuclear attack on the United States at any sign of American aggression.

Officials from the North, including leader Kim Jong Un, have indicated an intercontinental ballistic missile test or something similar could be coming.

Saturday will be the 105th anniversary of his birth.

Residents thronged Pyongyang's boulevards on a sunny spring morning, some practising for a parade to be held on the weekend, with no visible sign of the tension.

"So long as we are with our supreme leader Marshall Kim Jong Un we are not afraid of anything," a woman who gave her name as Ri Hyon Sim told Reuters journalists, who were escorted by North Korean officials.

Russia has said it is worried about the possibility of a U.S. attack on North Korea and it would raise the issue with visiting U.S. Secretary of State Rex Tillerson, Russian media quoted Deputy Foreign Minister Sergei Ryabkov as saying.

Japan's Maritime Self Defence Force and the U.S. Navy could conduct helicopter landings on each other's ships, as well as communication drills, they said.

A senior Japanese diplomat said it appeared the U.S. position was to put maximum pressure on North Korea to reach a solution peacefully and diplomatically.

"At least, if you consider overall things such as the fact that the U.S. government has not put out warnings to its citizens in South Korea, I think the risk at this point is not high," said the diplomat, who declined to be identified.

The North fired a liquid-fuelled Scud missile this month, the latest in a series of tests that have displayed its ability to launch attacks and use hard-to-detect solid-fuel rockets.

North Korea remains technically at war with the United States and its ally South Korea after the 1950-1953 Korean conflict ended in a truce, not a peace treaty. It regularly threatens to destroy both countries.