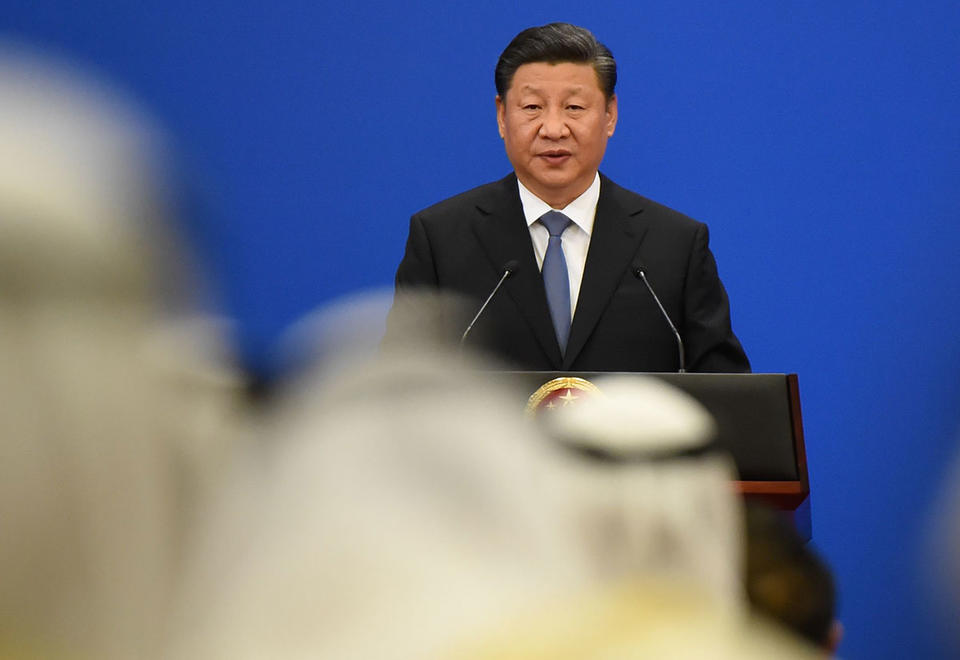 Chinese president to start state visit to UAE on Thursday

Chinese President Xi Jinping is due to arrive in the UAE on Thursday on a three-day state visit, the first to a foreign country since he was re-elected.
President Xi’s visit features a series of high-level meetings aimed at strengthening ties between the two countries with a view to beginning a new phase of long-term, mutually beneficial, co-operation.

President Xi is scheduled to visit Louvre Abu Dhabi and cultural exchange is an important part of the visit.

The Adnoc headquarters in Abu Dhabi is illuminated with the Chinese flag. Abdul Rahman/Gulf News
His Highness Shaikh Mohammad Bin Rashid Al Maktoum, Vice-President and Prime Minister of the UAE and Ruler of Dubai, welcomed Chinese President Xi Jinping in this “historic visit that celebrates the strategic partnership between the two countries and establishes a new phase of fruitful co-operation and promising outlooks”.

“The UAE currently hosts 200,000 Chinese citizens and 4,000 trading companies. We seek to build long-term economic, cultural, and trade and investment ties with China. We are happy to celebrate China’s rich and continued historical culture on an annual basis,” Shaikh Mohammad Bin Rashid said in an earlier statement.
His Highness Shaikh Mohammad Bin Zayed Al Nahyan, Crown Prince of Abu Dhabi and Deputy Supreme Commander of the UAE Armed Forces, said the UAE and China play a pivotal role in the stability of the region and its economic future.
“Over 28 years ago, the late Shaikh Zayed Bin Sultan Al Nahyan visited China, founded the strategic relationship between the two countries that has yielded fruitful trade and investment as well as cultural relations for more than three decades,” Shaikh Mohammad Bin Zayed added.
“China is an international commercial giant with a global political weight playing an active role in stabilising the global economy and attaining peace and security,” Shaikh Mohammad Bin Zayed said.
The UAE-China Week, running from July 17 to 24, coincides with the Chinese president’s visit and is aimed at placing a spotlight on the relations between the two nations, and to enhance trade cooperation and cultural exchange. Chinese cinema, literature, fashion and art are celebrated as part of events at Manarat Al Saadiyat.

King Abdul Aziz street in Abu Dhabi is decorated with the national flags of the UAE and China. Abdul Rahman/Gulf News
The UAE will celebrate UAE-China Week annually, coinciding with Chinese New Year celebrations.
An economic forum will be held in the capital on Friday evening, which will be attended by Sultan Bin Saeed Al Mansouri, Minister of Economy, and his Chinese counterpart Zhong Shan.
Recent years have witnessed a rapid growth in the UAE-China economic partnerships, with the annual trade volume between the two countries exceeding $50 billion, making the UAE for successive years the second largest trading partner of China.
Dr Sultan Ahmad Al Jaber, Minister of State, said our relationship with China is a long-term strategic one that encompasses a multitude of aspects — political, economic, cultural, social, tourism, among others.
He added the UAE-China relationship is rooted in the principles of mutual respect, constructive dialogue and meaningful cooperation to achieve their common interests in a variety of sectors.
Dr Al Jaber, also chairman of the National Media Council, said the strategic cooperation between the UAE and the People’s Republic of China aims to realise the interests of both countries across an array of fields, including politics, economy, trade, energy, technology, culture and tourism.
He stressed that there is already tangible, substantive cooperation between the two countries in the energy sector, with a significant number of projects and initiatives already under way between the Abu Dhabi National Oil Company (Adnoc) and Chinese energy companies.