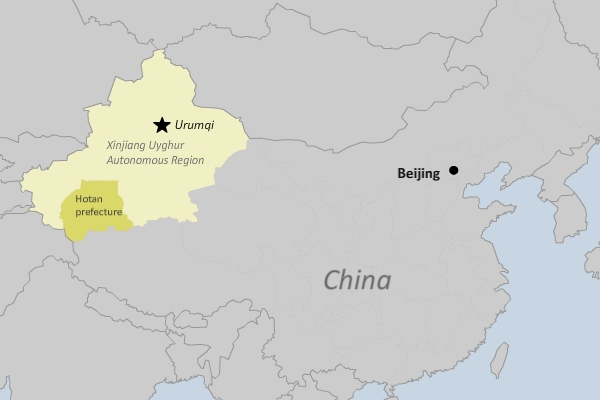 Chinese Offer Reward for Information on Terrorism, Religion in Xinjiang

The Levant News -- Officials in the Xinjiang Uyghur Autonomous Region are offering a cash bounty of up to 5 million yuan (U.S. $774,000) for tips about suspicious activity linked to terrorism or religious extremism, RFA’s Uyghur Service has learned.

"The program is a necessary step that corresponds to the reality and development of Xinjiang,” said a government official who spoke on condition of anonymity.

While informants can cash in, the amount of money they receive depends on the quality of information they give, local law enforcement officials told RFA. The reward program took effect on April 11, according to authorities,

“The reward amount depends on value of information,” A Uyghur police officer based in the Hoten (in Chinese Hetian) Prefecture told RFA. “We report the information they provide to us to the local public security department, which evaluates the value of the information.”

The rewards fall into various categories with information about bombs, bombers and bomb making raking in the most cash.

“Information about a bombing somewhere, or making bombs, or planning to make bombs for an attack is the most valuable,” another local police officer explained. “The top information will be awarded 5 million yuan.”

“This includes the planning stage,” the officer added. “If someone informs us before the attack, the cash reward will increase because that is preventive work.”

While the reward program is linked to terrorist activities, it can also be used to encourage people to talk to officials about religious extremism, according to authorities.

“If someone provided us information about illegal religious activity, they can also get the reward,” said another police officer based in the Hoten (in Chinese Hetian) Prefecture.

“The information regarding religious schools is also considered valuable information, and the informant also deserves a reward, but the 5 million yuan only goes to the informants who provided information about activity linked to terrorism,” said another police officer.

While the main aim of the program is interdicting terrorist activity, the officer said someone has already collected some money for turning in an illegal religious school. Under the program an informant’s identity is confidential.

“In our village we rewarded a guy who informed us about an illegal religious school,” the officer said. “We have arrested that school teacher.”

When pressed about the arrest, the officer declined to say anything else.

But that type of action is exactly what concerns the human rights activists, who see it as another way for the Chinese government to put pressure on Uyghur society.

“We know in the Chinese cultural revolution that a mechanism to award informants existed during that period,” said Uyghur human rights activists Enwer Tohti. “Under this mechanism, everybody spied on each other. If a guest came to your home, the police station near your home knew it within five minutes.”

That kind of activity breeds suspicion and undermines the local society, he said.

“Under these circumstances, you can't say you have a healthy society,” he said. “At the end of the day, this surveillance mechanism harmed social relationships, the fabric of society, and created a social hypocrisy.”

Rights groups accuse the Chinese authorities of heavy-handed rule in Xinjiang, including violent police raids on Uyghur households, restrictions on Islamic practices, and curbs on the culture and language of the Uyghur people.

China has vowed to crack down on what it calls the “three evils” of terrorism, separatism, and religious extremism in Xinjiang.

But experts outside China say Beijing has exaggerated the threat from Uyghur separatists, and that domestic policies are responsible for an upsurge in violence that has left hundreds dead since 2012.

Reported and translated by Jilili Musa for RFA's Uyghur Service. Written in English by Brooks Boliek.