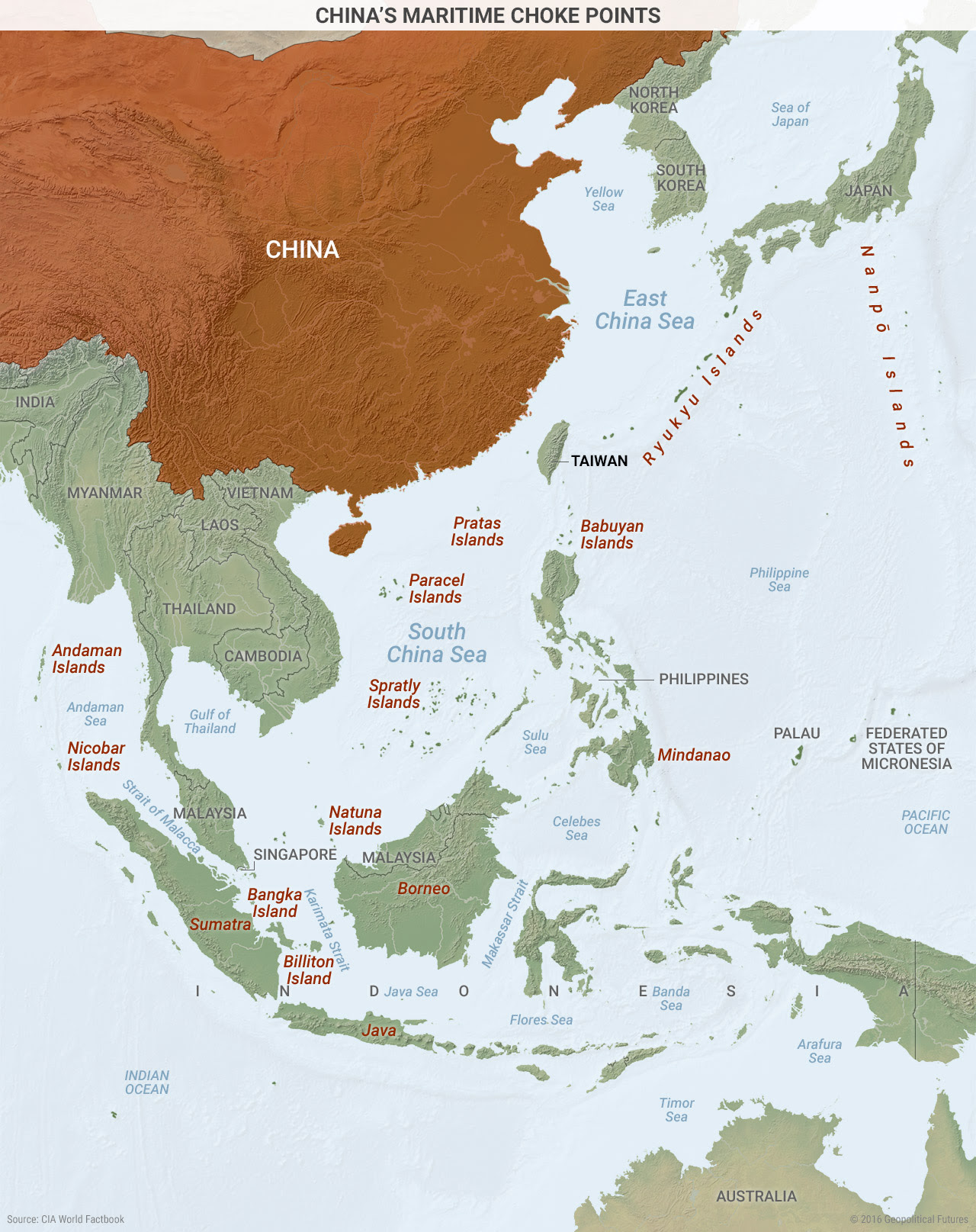 By​ George Friedman for Stratfor --
There is widespread interest in the rising tensions over the waters east of China. China has become increasingly assertive in the region, and regional powers from Japan to Singapore have become alarmed at China’s behavior.

The Chinese recently built an island in the South China Sea, apparently as a potential airbase. The United States sent a carrier battle group there as well. For all the activity and discussion, it is not clear that people really understand what all this is about. This week’s map will help clarify the situation.

There are two seas to the east of China – the East China Sea to the north and the South China Sea to the south, with Taiwan positioned in between. Air and naval forces based in Taiwan are, at least in theory, able to prevent movement between the two seas. The Taiwan Strait is fairly narrow and movement by the Chinese to Taiwan’s east forces China to pass near the Philippines to the south, or through the Ryukyu Islands to the north. Passage through the Ryukyu Islands could be blocked by hostile naval forces or by land-based aircraft and missiles.

Therefore, China has a naval problem. It must assume that in war, it will have two different maritime theaters of operation, the East and South China seas, and will have difficulty moving forces from one to the other. Consequently, it needs a strong navy.

There is an identical problem in both seas. They are surrounded by archipelagos of islands that isolate the seas from the Pacific and, therefore, from the rest of the world. The islands of the Philippines and Indonesia create narrow passages into the Pacific and Indian oceans. Java, Borneo and Mindanao are the frame of this system of islands, while the space between them is filled with randomly distributed smaller islands. Compounding China’s problem, the interior of the South China Sea is also filled with small islands.

Any of these islands can house hostile air and missile forces, while the narrow spaces in between can be blocked by naval forces. China doesn’t have guaranteed access to the islands on the periphery of this system. To gain access, it must control a wide passage through the South China Sea, and having done that, force its way through the narrow straits surrounding it.

Assuming that the United States would position its carrier battle groups in the east and south of the outer frame, the Chinese would first have to clear the interior of the South China Sea and then fight their way through narrow choke points that the U.S. could make impassable.

The same situation exists in the East China Sea. The Ryukyu Islands are scattered between Taiwan and Japan and stand as sentinels, with narrow passages between them. There is no system of interior islands here, as there is in the South China Sea, but the approach of Chinese warships would be visible from the moment they sortied from port, and would be subject to air and missile attack throughout their approach to exits.

From the map, you can see what the Chinese concern is. China is a trading power that depends on its access to the world’s oceans. Geography has created a barrier for Chinese ships and it would be relatively easy for this barrier to be sealed by a major naval power. Therefore, a blockade imposed by a power such as the United States could cripple China. It follows that a core Chinese imperative is to create guaranteed passage through the barriers. To do that, China would have to take control of the islands around the frame, hold them to prevent air attacks and use them for land- and sea-based missiles to keep an enemy fleet far to the east or deter a blockade in the first place.

Therefore, it is clear why the Chinese care so much about the Spratly and Paracel islands in the South China Sea. Until they can guarantee that these islands are not controlled by hostile forces, their ability to create a Chinese-controlled channel through the islands framing the South China Sea is limited. They need to clear the islands both to allow themselves access and to deny anyone the ability to use the islands to cripple operations in the first place. The Chinese are trying to take the first step in guaranteeing their access to the global sea lanes.

The same problem exists in the East China Sea, but as with the South China Sea, conducting combined amphibious, naval and air operations to take control of the Ryukyu Islands is extremely difficult. But if you look at the map, you can see where the crucial breakpoint would be: Taiwan. Holding Taiwan would allow access to two substantial lanes for maritime movement to the north and south and allow an air force to be based on the island. This would eliminate the choke point in the Taiwan Strait, allowing the northern and southern fleets to merge and bring in reinforcement as needed. The Chinese obsession with Taiwan is historical and political. But it is also driven by strategic considerations because of concerns over a possible blockade, whether through political or military means.

China’s naval forces remain inadequate for conflict with the United States. The Chinese have adopted an interim strategy of using air- and land-based anti-ship missile systems to keep the U.S. Navy far to the east and south of the choke points. But these missiles are vulnerable to U.S. air and missile suppression. Therefore, the Chinese are combining them with naval operations intended to intimidate regional nations from working with the United States. As we see in the Philippines, these operations have had the opposite effect. But from the Chinese point of view, this does not change the geographic reality and therefore cannot be seen as a failure, but merely reinforcing the core strategic reality.

One alternative option for the Chinese, if they are unable to mount amphibious operations, is to return to a strategy from the 1960s and use support for insurgencies in Indonesia, Malaysia and the Philippines to create political shifts that would eliminate major threats to Chinese movements. But such insurgencies could force an increase in U.S. naval presence in the region.

A look at this map reveals both Chinese concerns, Chinese motives and the difficulty of the Chinese position. It also shows why the use of a carrier battle group in the South China Sea by the United States was important.

The Chinese problem is geography, and the geography of its eastern seas does not favor them.