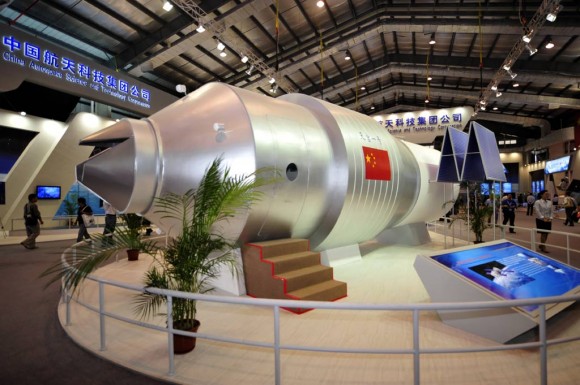 China’s first space lab will soon crash to Earth. No one knows where it’ll hit.

Sometime within the next few months, the heavens will come crashing down.

Tiangong 1, which translates to "Heavenly Palace," is China's first space laboratory, launched in September 2011, serving as a prototype for a permanent space station that it aims to eventually build and launch. But six years after it first went into orbit, the 8½-ton laboratory is soon expected to meet a fiery and uncontrolled end, hurtling down to Earth and crashing somewhere — anywhere —  on the planet.

In September 2016, Chinese officials confirmed that they had lost control of the space lab and that it would crash into Earth sometime in the latter half of 2017. In May, China told the United Nations that the lab would reenter Earth between October and April 2018.

Much of the space lab, which measures 34 feet in length, is expected to burn up during its reentry. But Jonathan McDowell, an astrophysicist from Harvard University, told the Guardian that pieces weighing up to 220 pounds could make it to the Earth's surface.

Where exactly the craft will fall is anyone's guess. Even slight changes in atmospheric conditions can alter the landing site "from one continent to the next," McDowell told the Guardian.

Uncontrolled crashes of larger spacecraft, while rare, have happened before. The Soviet Salyut 7 space station crashed to Earth in 1991, while NASA's Skylab space station fell over Western Australia in 1979.

China launched Tiangong 2, its second experimental station, in September 2016. China is aiming to have a permanently manned space station in orbit by 2020.

The 2011 launch of Tiangong 1 was seen by some as a "potent political symbol" that marked an important step forward in China's expanding space program. It was regarded as a geopolitically significant event, part of China's broader space program through which it wants to assert its emergence as a new superpower.

Tiangong 1 ended its service in March after it had "comprehensively fulfilled its historical mission," Wu Ping, deputy director of the manned space engineering office, was quoted as saying at a news conference by Xinhua, China's state news agency. The lab had served as a base for space experiments for four and a half years, two years longer than originally planned. It hosted two three-person crews, including China's first female astronaut, Liu Yang, in 2012.

The station has been descending gradually since its service ended. More recently, it has started to fall faster, reaching the denser layers of Earth's atmosphere, the Guardian reported.

The odds that the crashing craft will damage aviation or ground activities is "very low," China told the United Nations, adding that it would closely monitor Tiangong 1's descent.

For spacecraft that remain in control, scientists carefully guide their reentry to a place on Earth called the Oceanic Pole of Inaccessibility, a 2.5-mile-deep spot in the ocean known as the "spacecraft cemetery" about 3,000 miles off the eastern coast of New Zealand and 2,000 miles north of Antarctica. As of June 2016, more than 263 spacecraft had crashed at the cemetery since 1971, according to Popular Science.