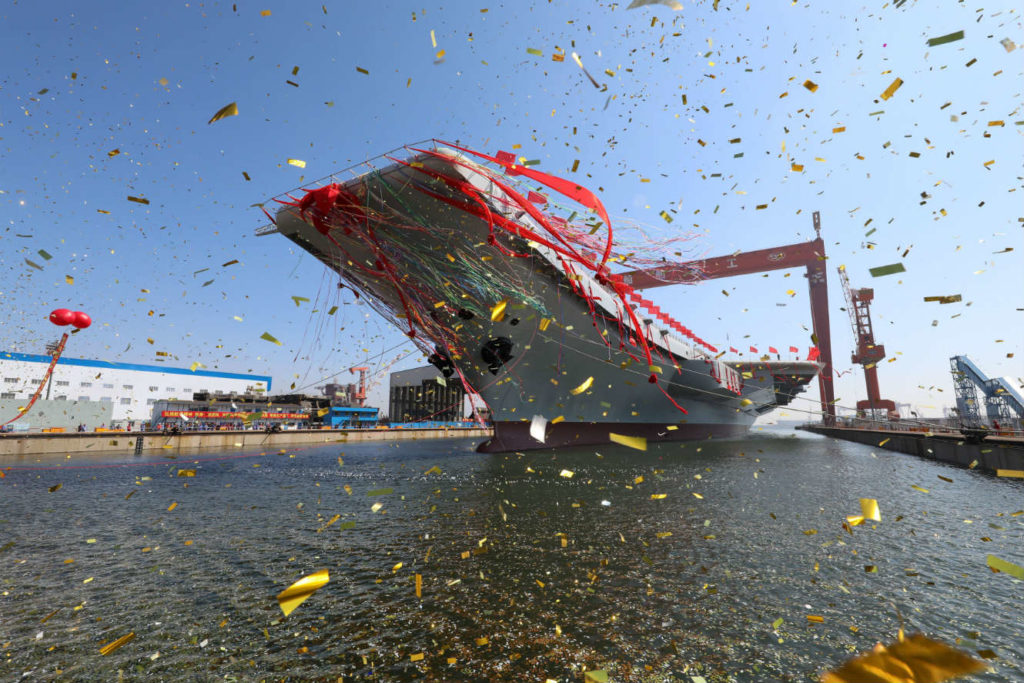 China’s first ever domestically manufactured aircraft carrier began sea trials Sunday, as it set off from Dalian in the northeastern province of Liaoning.
The 50,000 tonne vessel, when it joins the Chinese navy in 2020, will put it on par with the other leading navies in the world, giving the Asian giant its second aircraft carrier, along with it becoming the first to be designed and built entirely in the country.
What will be at test is the carrier ’s reliability and stability with regards to its power systems. According to state owned media Xinhuanet, construction began in April of last year, to make it ready for for its trial mission at sea, equipment debugging, outfitting and mooring tests were completed.
As of now the vessel remains a ship with no name and is presently referred to as Type 001A. The ship, when commissioned, will join China’s other carrier, the Liaoning — a soviet era vessel procured from Ukraine in 2012 and celebrated as the realization of a “70-year-dream” by the Asian power.
Sunday morning began in China with state broadcaster CCTV relaying footage of the vessel embarking into the blue on a rather gray day. The ship’s chief engineering commander, Hu Wenming, told the broadcaster the carrier was smaller than U.S. carriers’ Nimitz class. The new Chinese carrier can neither sale for longer without refueling than the above mentioned U.S. carriers, nor can it carry as many planes.
What is more significant than its ability is the fact that China is now capable of creating this range of of aircraft, something the broadcaster pointed out.
This comes on the back of a speech given on April 12 by Chinese President Xi Jinping announcing the Chinese Communist Party planned on building a “world-class” navy.

Speaking to CNN of this morning’s sea trials, Sam Roggeveen, senior fellow at Sydney's Lowy Institute said: "This is, in and of itself, not designed to be some frontal challenge to U.S. power in the Asia Pacific, because it simply isn't in the class of America's aircraft carriers."
Alluding to recent Chinese shows of force toward Taiwan, Michael Kovrig, senior adviser for North East Asia at the International Crisis Group, poured more insight on the development saying: “It’s raising the cost of an intervention, particularly by the U.S., in any conflict off China’s coast.”
“It’s one more step in shifting the strategic balance in the western Pacific and in creating a Chinese sphere of influence,” Kovrig added, the Wall Street Journal reported .
The CNN report also pointed out that the vessel passing its sea trials, does not necessarily mean it is combat-ready. In fact, the USS Gerald R Ford, the United States’ newest carrier and at $13 billion, the most expensive warship ever built, has a host of problems.
Embarrassingly, for the United Kingdom, their new aircraft carrier, the HMS Queen Elizabeth, sprung a leak during its sea trials in 2017, and required repairs.