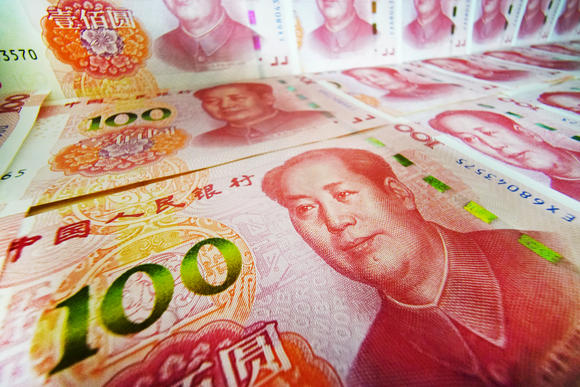 China added to bond investors’ jitters on Wednesday as traders braced for what they feared could be the end of a three-decade bull market.

Senior government officials in Beijing reviewing the nation’s foreign-exchange holdings have recommended slowing or halting purchases of U.S. Treasuries, according to people familiar with the matter. The news comes as global debt markets were already selling off amid signs that central banks are starting to step back after years of bond-buying stimulus. Yields on 10-year Treasuries rose for a fifth day, touching the highest since March.

China holds the world’s largest foreign-exchange reserves, at $3.1 trillion, and regularly assesses its strategy for investing them. It isn’t clear whether the officials’ recommendations have been adopted. The market for U.S. government bonds is becoming less attractive relative to other assets, and trade tensions with the U.S. may provide a reason to slow or stop buying American debt, the thinking of these officials goes, according to the people, who asked not to be named as they aren’t allowed to discuss the matter publicly. China’s State Administration of Foreign Exchange didn’t immediately reply to a fax seeking comment on the matter.

The Chinese officials didn’t specify why trade tensions would spur a cutback in Treasuries purchases, though foreign holdings of U.S. securities have sometimes been a geopolitical football in the past. The strategies discussed in the review don’t concern daily purchases and sales, said the people. The officials recommended that the nation closely watch factors such as the outlook for supply of U.S. government debt, along with political developments including trade disputes between the world’s two biggest economies when deciding whether to cut some Treasury holdings, the people said.

A top Treasury official signaled confidence in the U.S. government debt market, which at $14.5 trillion is the world’s largest.

“The U.S. Treasury market is a deep, robust market within the world and so we are confident that our economy, with the economy strengthening, that it will remain a deep, robust market,” Under Secretary for International Affairs David Malpass told a group of reporters in Brussels.

Any reduction in Chinese purchases would come just as the U.S. prepares to boost its supply of debt. The Treasury Department said in its most recent quarterly refunding announcement in November that borrowing needs will increase as the Federal Reserve reduces its balance sheet and as fiscal deficits look set to widen.

“It’s a complicated chess game as with everything the Chinese do,” said Charles Wyplosz, a professor of international economics at the Graduate Institute of International and Development Studies in Geneva. “For years they have been bothered by the fact that they are so heavily invested in one particular class of U.S. bonds, so it’s just a question of time before they would try to diversify.”

Some investors said that the market could take the China news in stride, considering the nation’s net purchases of Treasuries have already slowed “significantly.”

“If China ceases to be a net purchaser of U.S. Treasuries, this is unlikely to have a significant impact on the overall yield curve unless China divests a large share of its total holdings in a short time period,” said Rajiv Biswas, Singapore-based chief Asia-Pacific economist at IHS Markit.

Yields were already climbing this week amid expectations the improving global economy will boost inflation pressures round the world, just as major central banks scale back their asset purchases.

Markets are also braced for a deluge of debt supply this week. The U.S. is scheduled to reopen $20 billion of 10-year debt Wednesday, followed by $12 billion of 30-year bonds Thursday. Germany sold 4.03 billion euros of 0.5 percent 10-year bonds Wednesday with syndications in Italy and Portugal to follow.