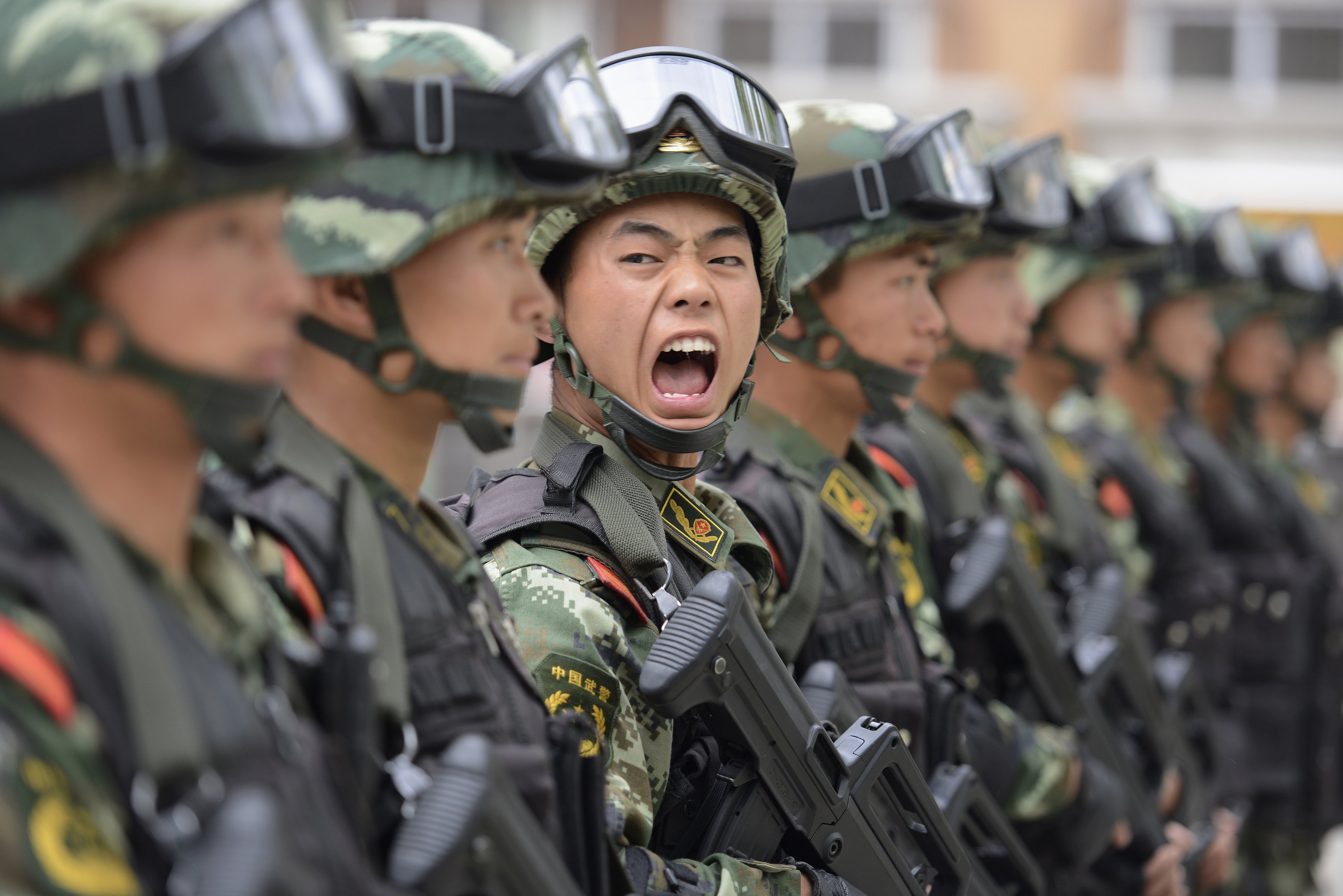 The parade, long anticipated but only officially announced Saturday, was part of the celebrations of the 90th anniversary of the People's Liberation Army (PLA). It was also viewed as a potent reminder of Xi's firm grip on power ahead of a key Communist Party meeting this fall, where a major leadership reshuffle is expected.

Unlike previous public displays of its growing military might, China held Sunday's event at the remote Zhurihe military base in Inner Mongolia -- instead of in the center of Beijing.

A Defense Ministry spokesman said Zhurihe -- Asia's largest military training center in the middle of a desert and complete with life-size mockup targets such as Taiwan's presidential palace -- was selected to highlight the PLA's combat readiness, but he emphasized that war-zone trainings had been long scheduled.
Chinese People's Liberation Army (PLA) troops march at Zhurihe training base in north China's Inner Mongolia Autonomous Region.
"They have nothing to do with the current situation in the region," Col. Ren Guoqiang said in a statement.
North Korea tested an intercontinental ballistic missile (ICBM) on Friday and claimed it could reach all of the United States. Trump had been pressing Beijing, Pyongyang's only major global ally that provides an economic lifeline to the regime, to use its leverage to make North Korea halt its nuclear and missile programs.
"I am very disappointed in China," Trump said in a two-part tweet Saturday. "Our foolish past leaders have allowed them to make hundreds of billions of dollars a year in trade, yet they do NOTHING for us with North Korea, just talk. We will no longer allow this to continue. China could easily solve this problem!"
Dressed in camouflage, Xi -- who is the head of the ruling Communist Party and the 2 million-strong PLA, in addition to state president -- inspected 12,000 troops in various formations from an open-top military jeep.
More than 100 planes flew overhead and almost 600 types of weaponry were on display for the occasion — nearly half of which were making their debut in public, according to the Defense Ministry.
In a brief speech, Xi expressed his pride in the military and demanded the troops' continued "absolute loyalty" to the party.
While he made no mention of Trump's tweets -- and China has consistently dismissed similar criticisms in the past -- Xi alluded to an increasingly important role for the PLA as tensions flare around the globe.
"The world is not peaceful and peace needs to be defended," he said. "Our heroic military has the confidence and capabilities to preserve national sovereignty, security and interests... and to contribute more to maintaining world peace."
"Trump has cornered himself on the North Korea issue," said Zhang Baohui, a professor of political science at Hong Kong's Lingnan University. "North Korea defies him -- the only action he can take now is with US-China relations. I think we might see some kind of unilateral measure on trade, but China may be ready for this."
Analysts like Zhang have been watching closely developments in China's arsenal as the PLA becomes more willing to flex its muscles in the region, especially in China's territorial disputes with its neighbors.
Attracting the most attention Sunday was the J-20, China's newest-generation stealth fighter that could potentially rival the F-22 or F-35 in the US military.
"It's evidence that it's operational -- it's a statement," Zhang said. "It will give China's air force an advantage over neighboring countries' air power."
Perhaps coincidentally, the last weapons rolled out at Sunday's parade were China's own nuclear warhead-capable ICBMs, which state TV announcers proudly called "symbols of a major power."
Zhang said China showed off the DF-31AG mobile intercontinental ballistic missile, an upgrade to the DF-31A that was introduced in 2009.
"The AG version has better off-road ability and is believed to carry multiple warheads," he said. "The DF-31A is fitted with one warhead. Deploying multiple warheads on China's strategic missiles gives them better abilities to penetrate US missile defense."
Source: CNN