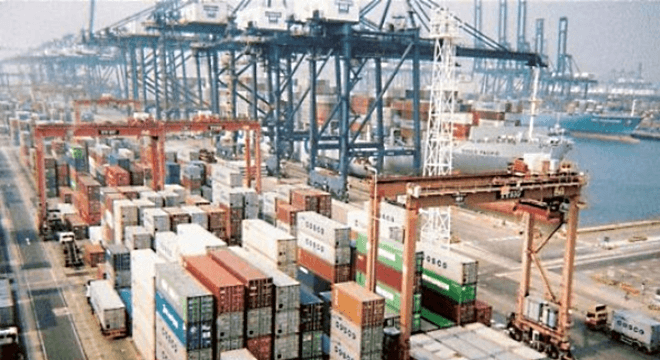 Cosco Shipping Ports Limited on Sunday broke ground for the construction a new terminal at Khalifa Port and also signed an agreement with Abu Dhabi Ports Company for a container freight station, which is expected to be the largest in the region.

The construction and development of the terminal is expected to last approximately one-and-a-half years and operations will commence in the first quarter of 2019.

The freight station is also expected to start operating around the same time.

Abu Dhabi Ports last year signed a 35-year concession agreement with the China-based Cosco Shipping to build and operate a terminal at Khalifa Port. The total investment in the terminal is about $400 million (Dh1.47 billion). The companies did not reveal investment involved in the construction of container freight station.

“This is a big bonus for us, freight cost will reduce dramatically. There will be a direct access to international markets and transit time will also be reduced. We will have a very strong access to Asian markets, China in particular,” he said during a press conference in Abu Dhabi.

Since the visit of His Highness Shaikh Mohammad Bin Zayed Al Nahyan, Crown Prince of Abu Dhabi and Deputy Supreme Commander of the UAE Armed Forces, to China in 2015, the relationship between the two countries has been growing in a number of areas, especially that of economic and trade relations.

China is the UAE’s second biggest import partner behind India. At the same time, the UAE is responsible for one-third of China-GCC trade and one-fifth of Sino-Arab trade. The UAE is considered a gateway to about 60 per cent of China’s exports to regional markets at an annual volume of exchange of $70 billion.

The bilateral trade between the two countries stood at $40.6 billion in 2016. For the first six months of 2017, the relationship has seen $20.254 billion worth of trade, with China importing $6.286 billion, and exporting $13.968 billion, according to the latest update from Chinese embassy in Abu Dhabi.

Five Chinese companies will also start operations in Abu Dhabi’s industrial zone with an initial investment of $300 million in a boost for the oil-rich emirate’s economic diversification plans.

The UAE and China also set up a joint strategic investment fund worth $10 billion in late 2015, financed equally by both countries. The fund is expected to play a critical role in supporting the ‘One Belt, One Road’ initiative of the Chinese government that focuses on connectivity and cooperation among countries — primarily in Europe and Asia.