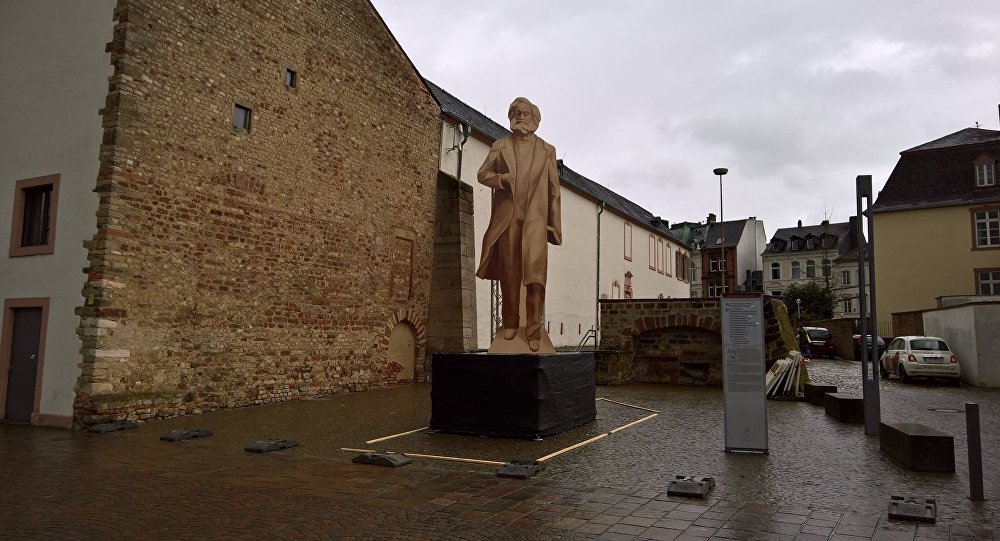 The Levant News -- The Chinese Embassy in Berlin has responded to German media reports which "over-interpreted" its gift of a statue to Trier, on the 200th anniversary of the birth of its most famous son, Karl Marx.

Trier, a prosperous German city in an area known for its Riesling white wine, has accepted a gift from 'red' China: a statue of Karl Marx, father of the eponymous philosophy.
Next year marks the 200th anniversary of the philosopher's birth, and the present has attracted controversy in Germany.

According to media reports, the western Germany town, which is located close to the border with Luxembourg, decided to accept the statue after it was proposed by China. The town council took the decision after a vote and a lengthy discussion.

However, on Wednesday the Chinese Embassy in Berlin complained to the newspaper Frankfurter Allgemeine that German newspapers have engaged in "selective reporting" regarding the statue.

"The statue came as a gift at the request of the Trier side," and was not imposed on the town, the Chinese embassy said.

The statue is a "friendly present and it shouldn't be over-interpreted or politicized or ideologized,"China added.

On Monday, Trier town council decided to accept the present after a debate which even discussed the merits of Marx' philosophy and the wisdom of accepting a present from China. In voting, 42 members of the town council voted to accept it, seven members were against and four abstained.

Greens representative Reiner Marz said he was opposed to the statue on political grounds. He said he wanted Trier to decline the gift so as to demonstrate opposition to human rights violations in China.
"Accepting a present means honoring the person who gave it. The Communist Party of China is not worthy of honor," Marz said.

Alternative for Germany representative Michael Frisch also rejected the gift, this time on the grounds of opposition to Marx's ideas.

"This is clearly about us supporting the Chinese state ideology, which is responsible for human rights abuses, and we cannot allow that in our free society," he told Deutschlandfunk radio.

However, Germany's governing parties, the Christian Democratic Union (CDU) and Social Democratic Party (SPD), were in favor of the statue.

"That the biggest country in the world is giving a present to the small town of Trier, that is really great," CDU representative Andreas Ludwig told SWR News.

"150,000 Chinese tourists come to Trier every year, and this could bring many more," he added.

The local Social Democratic Party (SPD) representative Markus Nohl also spoke in favor of accepting the present. He said it would be the starting point for discussion of Marx's works, which is "exactly what art is for."

"The gift from China is recognition for the birthplace of the great philosopher Marx," he said.

Predictably, the leftist party Die Linke, heir to East Germany's ruling Socialist Union Party, welcomed the gift. Die Linke leader Katrin Werner told the town council that the town should recognize its most famous son.
"It is fitting that Trier stands behind one of its best known children. The works of Marx, especially his striking analysis of capitalism, have moved people around the world and continue to do so," she said.

At the beginning of March, a wooden model of the statue was delivered to the town in order to give residents an impression of what the eventual statue will look like.

The planned statue will be created by Chinese artist Wu Weishan. According to plans, it will be an imposing 6.3 meters tall and stand near Porta Nigra, the town's 2nd-century Roman gates.