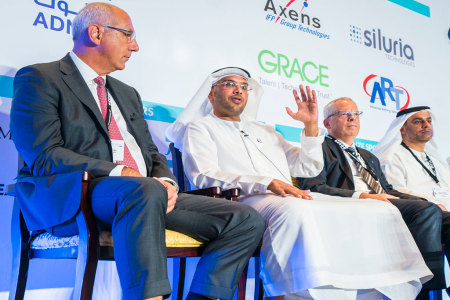 The China-Arab Cooperation Forum in Cultural and Tourism Industries Abu Dhabi 2019 took place yesterday on the sidelines of Abu Dhabi International Book Fair. The Fair is being held from 24-30 April at Abu Dhabi National Exhibition Centre, under the patronage of His Highness Sheikh Mohammed bin Zayed Al Nahyan, Crown Prince of Abu Dhabi and Deputy Supreme Commander of the UAE Armed Forces.

The China-Arab Cooperation Forum in Cultural and Tourism Industries aims to enhance the presence of Chinese cultural and tourism products in the Arab world, and promote stronger cooperation between China and Arab countries in the fields of culture and tourism through the strategy of exporting culture abroad and introducing foreign cultures locally. The event also aims to enhance communications and friendship between Chinese and Arab peoples.

The Chinese delegation, headed by Liu Wu, Chairman of the International Cultural Trade Zone in Beijing, noted that Abu Dhabi International Book Fair was selected to host the event due to its great cultural significance in the Arab world, following 29 years of success and cultural impact.

For its part, DCT Abu Dhabi invited all countries participating in ADIBF to take part in the Forum and exhibit their cultural products and practices, under the umbrella of Mega Culture, a concept for cultural and tourism exchange among the nations of the world. DCT Abu Dhabi also invited China to hold a variety of events focused on the shared objectives of exchange and cooperation between China and the Arab World, within the framework of the national ‘Hala China’ policy implemented by Abu Dhabi.

Liu noted that enhancing future cooperation between China and Arab countries necessitates the development of cultural and tourism trade standards, which is the main motive for China to invest in its international cultural relationships and create new opportunities for collaboration.

"The key to progress and success is the creation of opportunities for cultural and tourism cooperation. This has been successful in the UAE, particularly in the Emirate of Abu Dhabi, which enjoys important cultural and tourism partnerships and agreements with China, making it a hub for promoting China-Arab relations," Liu said.

For his part, Abdulla Majid Al Ali, Acting Executive Director of the Dar Al Kutub Sector, DCT Abu Dhabi, said: "It is a great honour for us that our Chinese friends have selected Abu Dhabi and its annual book fair to launch the Arab-China Cooperation Forum in the Cultural and Tourism Industries Abu Dhabi 2019. ADIBF has always functioned as a platform for cultural exchange, and the Forum has been a wonderful opportunity to highlight and strengthen the relations between Arab nations and one of most important allies, China."

Al Ali noted that the Forum reflects mutual aspirations, under the wise guidance of the UAE and China’s leaderships, to further enhance relations between China and the Arab world. China, he continued, plays an important role on the global stage, as an active player as well as an exemplary success story. China also enjoys strong relations with the UAE in various fields, which is getting stronger and more diversified day after day.

Al Ali stressed that this strong partnership was manifested in the state visit of the Chinese President Xi Jinping to the UAE last year, as well as in the selection of China as Guest of Honour at Abu Dhabi International Book Fair in 2017. The strong relationships are also apparent in the selection of Abu Dhabi as a key station in the China’s Silk Road programme. "This forum represents an additional lever for our friendly relations, a catalyst for further rapprochement, and for more business events, meetings, conferences and cultural and tourism initiatives," he concluded.

In his speech, the Director General of the International Cultural Trade Zone in Beijing, Chin Gang, reviewed Beijing's artistic and cultural centres, libraries, museums, schools and universities; as well as China’s advanced infrastructure in cultural and arts logistics, as part of its efforts to become a world hub for cultural exchange. He also highlighted that China has dedicated special museums, halls, and art centers to the Arabic culture. Gang stressed the importance of building strong bridges between the Arab and Chinese societies, especially after the launch of the Silk Road programme. The UAE is poised to play an important role in this exchange, especially with its strong infrastructure and high position on various international quality indicators. He also praised the UAE for its security and stability, allowing it to play an important role in the 21st century Marine Silk Road.

For her part, Dr. Fatima Hamad Al Mazrouei, a UAE researcher, highlighted in her speech the historical depth of cultural relations between China and the Arab world, the UAE in particular. She pointed out that that Silk Road was not only a trade route, but also a vehicle for cultural exchange and the transmission of customs and traditions. Al Mazrouei noted the need to create cultural residency programmes, in an attempt to revive the culture of travel as a method for cultural exchange. She also called for the establishment of translation workshops on both sides, and invited specialists to work on issuing a professional Chinese-Arabic literary dictionary and translation database.

Abdullah Al Hashimi and Hamed Al Hosani from Louvre Abu Dhabi gave a presentation on the museum and its journey from conception to its current position as an international hub for cultural exchange. The presentation also introduced the museum’s collection and exhibits.

"This forum is a step forward in the framework of Arab-Chinese cooperation, under the umbrella of the Silk Road programme," said Qassem Tafili, President of the Arab Chinese Cooperation & Development Association. "The Belt and Road Initiative has proven its historic significance. It aims not only at creating advanced infrastructure and expanding road networks and public facilities, but also at becoming a comprehensive initiative encompassing economic, social, cultural, artistic and other aspects," he concluded.