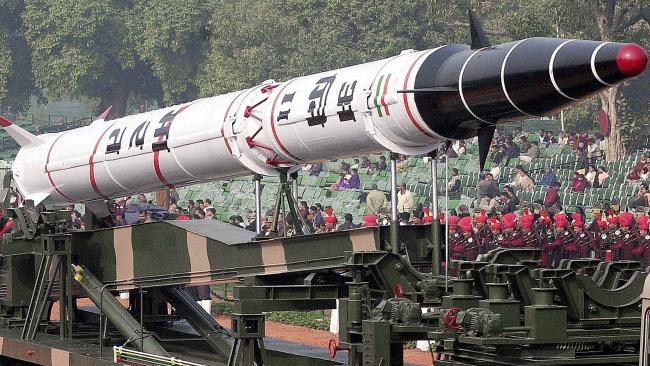 China accuses US of 'Cold War mentality' over nuclear policy

China has urged the US to drop its "Cold War mentality" after Washington said it planned to diversify its nuclear armoury with smaller bombs.

"The country that owns the world's largest nuclear arsenal, should take the initiative to follow the trend instead of going against it," China's defence ministry said on Sunday.

The US military believes its nuclear weapons are seen as too big to be used and wants to develop low-yield bombs.

Russia has already condemned the plan.

The US is concerned about its nuclear arsenal becoming obsolete and no longer an effective deterrent. It names China, Russia, North Korea and Iran as potential threats.

Where are the world's nuclear weapons?

The Pentagon document released on Friday, known as the Nuclear Posture Review (NPR), argues that developing smaller nuclear weapons would challenge that assumption. Low-yield weapons with a strength of under 20 kilotons are less powerful but are still devastating. The policy also proposes:

Countering the "growing threat from revisionist powers", such as China and Russia, was at the heart of America's new defence strategy announced last month.

What did China say?

China said on Sunday it "firmly" opposed the Pentagon's review of US nuclear policy.

The defence ministry in Beijing said Washington had played up the threat of China's nuclear threat, adding that its own policy was defensive in nature.

China has used the Cold War label before to criticise US policy. Late last year it denounced Washington's updated defence strategy and urged the US to abandon "outdated notions".

In the NPR document, the US accused China of "expanding its already considerable nuclear forces" but China defended its policy on Sunday saying it would "resolutely stick to peaceful development and pursue a national defence policy that is defensive in nature".

How did others react?

The Russian foreign ministry accused the US of warmongering, and said it would take "necessary measures" to ensure Russian security.

"From first reading, the confrontational and anti-Russian character of this document leaps out at you," it said in a statement on Saturday.