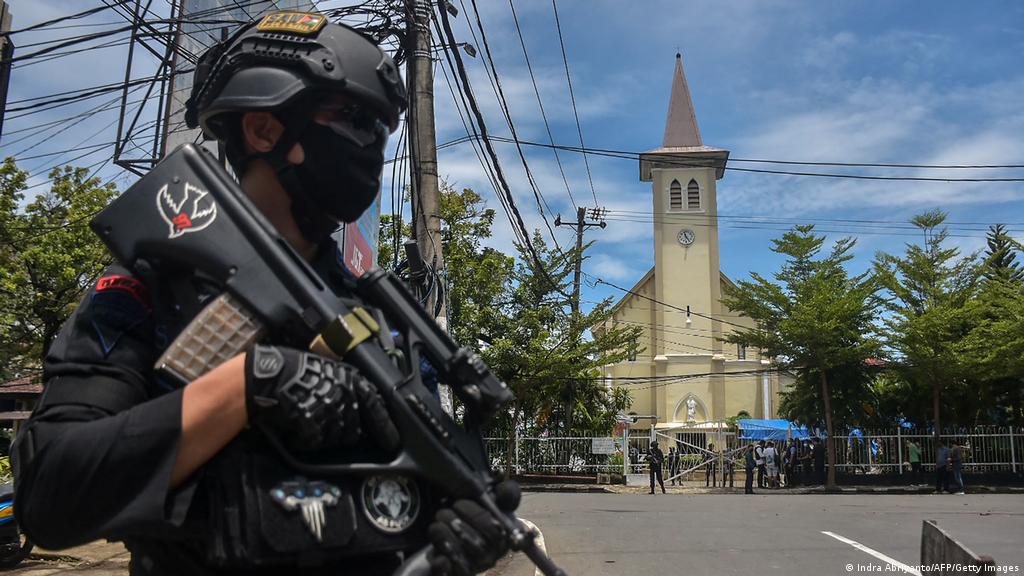 An Indonesian cathedral was rocked by a suicide bombing on Sunday with body parts littering the chaotic scene as Christians inside celebrated the start of Holy Week.

The powerful blast at the church in Makassar city on Sulawesi island happened around 10:30 am local time (0330 GMT) and left at least 14 church officials and congregants injured by debris, police said.

It was not clear if their wounds were life threatening.

"There were two people riding on a motorbike when the explosion happened at the main gate of the church -- the perpetrators were trying to enter the compound," National Police spokesman Argo Yuwono said.

"The bike was destroyed and there are body parts... We're still collecting parts and trying to identify the sex of the perpetrators."

Earlier, local police had said at least one bomber died at the scene. They have not confirmed if both attackers were killed.

Makassar Mayor Mohammad Ramdhan said: "There are many body parts here at the church compound as well as in the street."

A witness at the scene described the explosion as "very strong."

Police said a church security guard tried to prevent the motorbike from entering the compound when the blast occurred.

The explosion at the main Catholic cathedral in Makassar -- a port city of about 1.5 million -- happened just after congregants finished celebrating Palm Sunday, the first day of Holy Week, which commemorates Jesus's entry into Jerusalem.

It comes a week before Easter.

"We were finishing the service and people were going home when it happened," Pastor Wilhelmus Tulak told reporters.

Churches have been targeted in the past by extremists in Indonesia, the world's biggest Muslim-majority nation.

In 2018, a dozen people were killed when a family of suicide bombers blew themselves up at churches during Sunday services in Indonesia's second-biggest city Surabaya.

The family -- including two daughters aged nine and 12 -- and another family of five, which carried out a suicide bombing on a police headquarters, all belonged to the same Koran study group and were linked to local extremist network Jamaah Ansharut Daulah (JAD), which has pledged allegiance to Islamic State.

JAD, which has not claimed responsibility for Sunday's attack, gained notoriety in 2016 for a gun and suicide bomb attack in the capital Jakarta that killed four civilians and four attackers -- including one who blew himself up at a Starbucks outlet.

It was the first attack claimed by Islamic State in Southeast Asia.

Indonesia has long struggled with Islamist militancy and has suffered a series of attacks in the past two decades, including the 2002 Bali bombings which killed more than 200 people, mostly foreign tourists. The bombings were Indonesia's deadliest terror attack.