Breaking News
Home / In Depth / Capitalism Is Not a Moral Virtue, It’s Like Fire 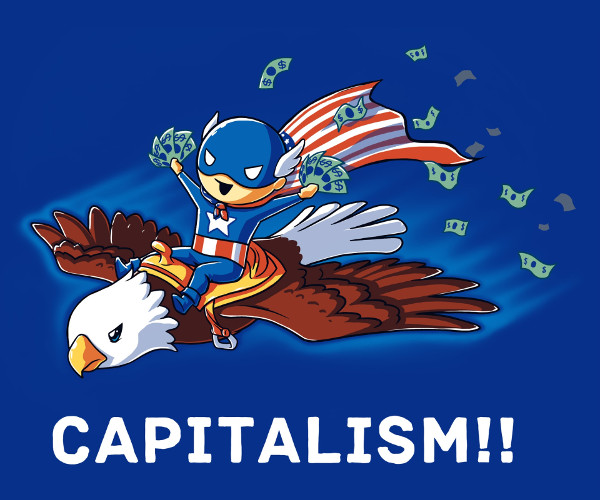 Capitalism Is Not a Moral Virtue, It’s Like Fire

By Graham E. Fuller — By now it is almost an article of faith in US political discussion that capitalism—more gently referred to as “the free market”—is a moral virtue in itself. It is not. Capitalism is amoral, like fire.

I grew up in a world in which the virtues of the American political system were perceived as unquestioningly superior to those of the Soviet Union. And indeed they were. “Freedom” and “free-market capitalism” were the philosophical underpinnings of the country. You had to have grown up during the Great Depression of 1929, as my parents did, to harbor any basic questions about the capitalist system.

The post-World War II era ushered in the real ideological confrontation between the “free” western and capitalist world that stood in stark contrast to the Soviet system—typified by its totalitarian character, brutality of rule, and economic misery. Meanwhile American living standards boomed.

But of course production is only part of the story of economic life: broad social welfare and social satisfaction represent the higher measure.

Yet we have been socialized — at least in America—to see capitalism as an absolute good in itself. (Europeans, however, often flirt with abhorrent socialism.)

Today, during an election that exposes the greatest massive voter dissatisfaction in living memory—both with the candidates as well as the overall system—it’s time for a rethink. Not to reject capitalism, but to see capitalism in the right context.

Capitalism is not a virtue in itself. That’s a misleading way to think about it. Capitalism is like fire. Fire in itself possesses no moral qualities. It is simply a powerful force, over millennia. It has heated our homes, cooked our food, driven our engines, illuminated the darkness. Handled right it has served us in admirable, even indispensable ways.

Heavily controlled, fire can be smothered and the flames can go out. But out of control, fire can be exceptionally dangerous and destructive to life and property. So the whole point of fire is not to cherish it as a moral good in itself, it’s an amoral force. The great trick is to employ fire as a powerful and valuable physical force, but also to keep it tamed, controlled, never allowed to run wild.

Today nuclear power possesses much the same qualities—an extraordinary source of energy, but its essence must be highly controlled, tightly confined and narrowly directed if it is to be productive. Otherwise it is a menace to the world. (Look at Fukushima). And, like fire, nuclear energy is not a moral good either, just a powerful force.

These ideas should be self-evident. Yet in the US, and perhaps in much of the UK, the public is socialized to worship at the shrine of the free-market as a moral principle, as an absolute good in itself—the freer the market, the better. US governance tends to operate on that principle.

A closely related proposition looks at the purpose of governance. In simplest terms governance should provide the broadest wellbeing for the most number of people. How that “broadest wellbeing” is defined is debated across various societies, but at bare minimum it must provide a modicum of food, shelter, health, education and security. That’s rock bottom. Without that there is nothing, not even the freedom to act as creative individuals.

Thus the ”health of the market-place” as such is not one of those primary goals—nor should it be.

Now, it’s obvious that there is a relationship between the health of the market (economy) and the overall health of society. But it is not a direct relationship. A healthy market can contribute significantly to the broader welfare, but it doesn’t do so automatically; it depends on how the market is defined and to whose benefit the economic system is operated. Yet in the US there is an unspoken assumption that the health of the market belongs at the top of the list of goals (“it’s the economy, stupid”). The state of the economy may considerably impact the general welfare, but it is not synonymous with the general welfare itself—the primary goal.

Thus the US—with its particular veneration of capitalism—needs to think about the trade-offs in its handling of this amoral engine. It is not enough to say that the free market has brought higher standards of living to more people than ever before in history; it has undoubtedly done so, but by making that the first priority is to displace what should be the real first priority— the overall welfare of the public. It is precisely that displacement in favor of the market that is now producing the present deep dissatisfaction with the present presidential campaign and the broader system it represents, a system where the interests of big money—the drivers of the engine—take top priority.

And when capitalism is allowed to run wild, it doesn’t stop with its disproportionate distribution of wealth and social priorities. It corrupts the very political order itself. Political candidates today publicly revel in the horse-race of who can receive bigger bribes (“contributions”) from corporate interests.

These thoughts are hardly new. Yet such fundamental principles seem to have gotten lost in our veneration of the capitalist (or “free market”) system as an absolute value itself. It is a means, not an end.

Scandinavian societies in particular have devoted a great deal of thought to trying to define the general welfare in concrete terms, to create a measure for quality of life that goes beyond Gross National Product or corporate earning statements. They look instead at complex measures of overall quality of life: health, education, housing and food, leisure, and yes, fairness and social justice. These are the priorities. We then need to examine the best tools to achieve that.

Fire is by all means an extremely valuable force. Don’t let the flames go out, but don’t worship it or give it free run. And remember that nurturing the flames is not why we are on this earth.

Previous ISIS said to use Mosul residents as human shields as coalition closes in
Next I will not vote for Aoun: Speaker Nabih Berri

Armenia-Azerbaijan: The impotence of the Russia-led CSTO

For Armenia, Russia already proved to be an unreliable ally. The Kremlin seems to continue …