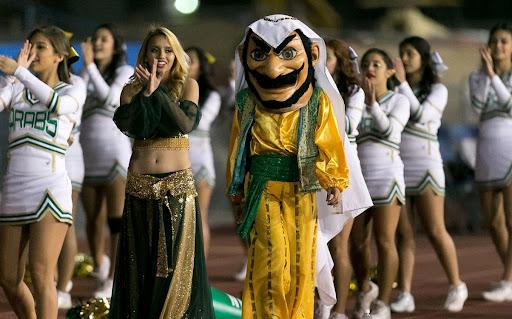 One hundred years ago Coachella Valley High School adopted the “Arab” as its school mascot after a link was established between that area of California and the Middle East.

“The Department of Agriculture sent out plant explorers all over the world and they were trying to find crops that would be successful here in the US and one of the crops they found were the dates,” said Lissette Santiago, community engagement manager for the Coachella Valley Unified School District.

“That’s how we wanted to honor everything that we had gained from the date industry and obviously that Middle Eastern community.”

But in 2013, complaints that the mascot was promoting racial stereotypes prompted a redesign.

“With the onset of 9/11 in 2001 that might have prompted many people to view the Arab community in a negative way,” she told us. “It was appropriate for us to have this discussion and we were happy that the Arab American Anti-Discrimination Committee approached us and we were able to have those discussions.”

A year later, they debuted the new “Mighty Arab” mascot, designed in collaboration with and approved by the Arab community, strengthening that 100 year connection between the Coachella Valley and the Middle East.

“To celebrate the Arab world and the Arab community and every year we have a date festival,” Santiago said.

The festival has been on hold due to the COVID-19 pandemic, but the students and staff are looking forward to next year when they can once again proudly and respectfully wear the symbol of the Mighty Arab and celebrate the date palms they provided.