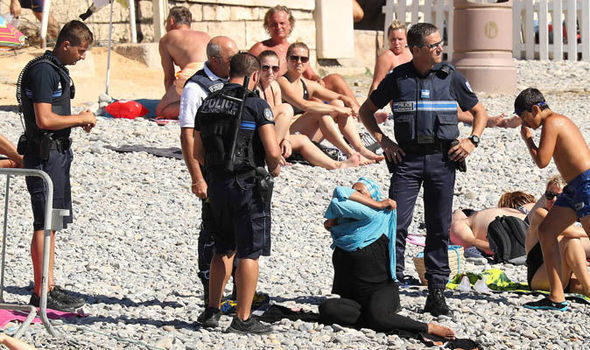 by Graham E. Fuller — Symbolism matters. Especially when it comes to other people’s cultures. Most recently we see the old/new issue about Muslim women’s dress, especially now grabbing headlines in France where “Islamic beachwear” or the “burkini” (burka-bikini), has been banned in several Riviera beach towns. France of course leads the world in its militantly secular posture on cultural and civic affairs. As well as the symbol of the bikini itself. (Topless—I won’t even go there.)

There are at least two ways of looking at this: one from the perspective of much of the Muslim world, the other from the perspective of western countries. The main difference here is this: westerners or others have of course right to express personal opinions on this issue, but have no authority overseas to decide on the issues that essentially affect Muslim women and local practices in the Muslim world. (Unless we are talking about gross violations of human rights which this is not.) It is Muslim men and women who have to decide for themselves what norms they seek on social dress codes for their own countries and cultures. In the Muslim world there is no unanimity, and furthermore the issue is evolving with time.

Let’s be clear—I’m talking about here the wearing of full face and body covering (burka), not about women’s modest Islamic dress such as the hijab—more like a nun’s habit—that covers the hair but not the face.

I happen to personally believe that women’s place in society is basically held back by the wearing of the full body and face covering (burka). That is indisputably the case in the West, but even in the East as well. But that is just my personal opinion. Some women, even some feminists, disagree. They make the case—which is hard to refute—that the state should get out of the business of telling women what they should wear (or do with their bodies.) As for men, few states seriously dictate what they should wear. In Kemalist Turkey women were banned from public jobs or access to university for wearing the hijab or head-scarf. Yet in Iran, women were not allowed in public unless they wore a hijab—they didn’t have to wear a burka. In both Iran and Turkey women are highly active in nearly all walks of life. So from a perspective of freedom, women should have the right to wear what they want. (Although it is often what the husband or family wants that prevails.)

In the West (or outside the Muslim world) the issue becomes more complicated. Citizens in the West can and do express their views on social norms or even vote on such matters in their own country. Western societies can make it more difficult, or easier, for Muslims to integrate into western societies through their public attitudes. I daresay a majority of westerners are probably fine with Muslim women wearing hijabs—we see them all over the place now—but are discomfited by a faceless woman in a burka. It seems like it represents the ultimate negation of personality (even if it is not intended to be.) It severely hinders social interaction and ultimately, social integration—certainly in the West, and in the job market.

There is also the case made by some (neoconservative writer Daniel Pipes, for example) who argues that there is a security issue here as well—that there are documented cases in his native Philadelphia of armed criminals masquerading in burkas to conceal their identity. Such cases exist, but I think are far overrated; the worst terrorist acts in the West have not involved such burka disguises. For that matter a hoodie serves as a pretty good disguise itself. In Canada recently a woman refused to remove her veil in a citizenship swearing-in ceremony on grounds of personal modesty. Yet it turned out the she was probably more interested in making a bold public statement about her rights in Canada (since she had readily removed the veil earlier for purposes of a photo ID for her citizenship certificate.) So my guess is that security issues around burkas deserve less consideration in the West. That said, any time personal identification is required in the West—banks, airport security, law procedures, driving—the burka must be put aside (in my view as a citizen).

Muslims can certainly make the case that they have a right to exercise their traditions and customs while living in the West—and let’s be clear that there is no remote consensus among Muslims in the West on what those customs should be—they are also the ones seeking to come to western countries and take up residence and citizenship. It is not unreasonable for western governments to ask that they conform to some common western norms if they wish to be granted the privilege of entry and citizenship. It is the price of admission—they are not compelled to seek permanent entry if they find the social milieu uncomfortable.

Above all, it’s important not to get too worked up over all of this. In the grand sweep of history it is just a passing moment, but of course for us living now, it is our passing moment. Still, time and society have a way of progressing. Immigrant societies like Canada, the US, Australia, New Zealand, most of Latin America, have watched waves of immigrants from all over the world arrive with their own unique customs and ultimately grow more integrated, even assimilated, almost invariably to the enrichment of the receiving society. And there just aren’t that many cases of residents wearing burkas in the West.

The burka issue is a hot button right now because it is emotionally linked to other hot issues—refugees, immigration, Middle East turmoil, terrorism, and national identities— issues that figure prominently in the headlines today. But in the longer run human beings are all integrating, homogenizing, slowly but inexorably, so that one hundred years from now the standard facial appearance of western citizens will be different than it is today—much less “”European.” And by then that will have become our ho-hum norm.

In the meantime, let the burkini-wearing conservative Muslim woman and the topless French female, regard at each other as they both frolic in the waves at St. Tropez. (The burkini actually does reveal the face.) Their societies will eventually work this out hopefully without governments having to weigh in with their cultural rule books. And yes, of course their are anti-Muslim prejudices involved in many cases. And the power relationships among the parties are not equal either. They never are.

But still, I doubt the burka has much of a future in the West. I can’t speak for the rest.

Previous No Money for Marrying Icelandic Maiden
Next How can Al Adnani’s death affect the ranks of ISIS? – Interview

Vaccine mandates in the United States, and a push for mandatory vaccination in various European …