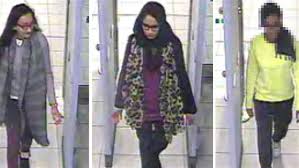 THE LEVANT NEWS — Counter-terrorism police said on Tuesday 56 women and girls were thought to have left Britain to go to Syria last year as they unveiled a film urging mothers not to take their families to live in a war zone.

About 800 British citizens are thought to have travelled to Syria, many to join the Islamic State militant group, since the outbreak of civil war.

There have been several high-profile cases among them including three teenage girls from London who were believed to have left the country for Syria last February, while in July police said a family of 12 – three sisters and nine children – were also feared to have joined IS.

Official figures released at the end of last year showed the number of Britons being arrested on suspicion of terrorism offences had risen by more than a third, partly due to more women and girls being detained.

Helen Ball, the Senior National Coordinator for Counter Terrorism policing, said the latest initiative was aimed at encouraging women and mothers to stop their children from following suit.

“We are deeply concerned about the numbers of girls, young women and also families who are taking the decision to go to Syria, unaware of the dangers they face when they arrive and the fact that they are unlikely to ever be able to return home to their devastated wider families,” she said.

The new film details the case of three Syrian refugee mothers talking about the hardship of life in Syria and querying why any women would take their family to live in a conflict zone.

It is part of a campaign launched back in April 2014 seeking to harness the influence of Muslim women in their communities to challenge those who wanted to travel to Syria.

“The film really shows that the messages circulated on social media by Daesh (Islamic State) are misleading and do not reflect the reality of living in Syria,” said Angela Williams, the Assistant Chief Constable for West Yorkshire Police.

The message comes a week after Britain’s border controls were criticised after it was revealed that a Briton, now suspected of being an Islamic State executioner, had slipped out of the country despite being on police bail after being arrested on suspicion of a terrorism offence.

Siddhartha Dhar left Britain for Syria even though he was supposed to have surrendered his passport.