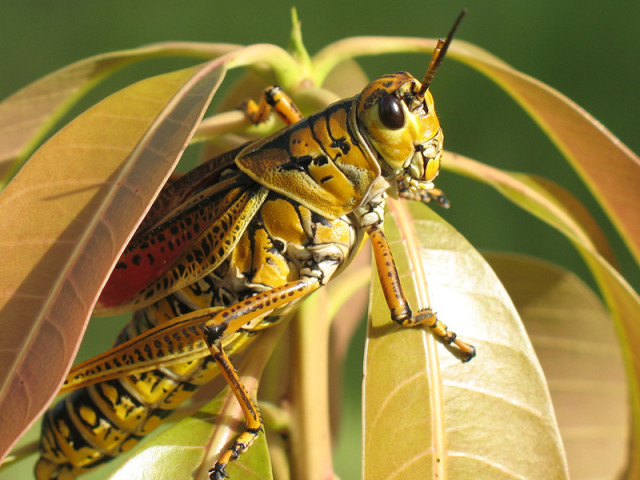 The arrival of locust swarms in Lebanon has caused panic among the country’s farmers.

Videos showing the insects flying over farmland in the towns of Ersal and Ras Baalbek in Bekaa circulated on social media, with the hashtag #locust trending in Lebanon on Friday as people made sarcastic comments about the latest crisis to hit the beleaguered country.

The Lebanese military said that helicopters had begun spraying pesticides over Baalbek and Ras Baalbek to “fight and eradicate” the desert locusts.

“Locusts have invaded one-third of Ersal,” he told Arab News. “As we rushed to find out the size of the disaster, locust swarms had already gone across the town, which means that in the early hours of Friday locusts were able to cross 15 km, heading from barren areas toward Ersal. If these swarms multiply, they can cover the sun.”

Ersal was home to more than two million cherry, apple and apricot trees that were located on the town’s southern and eastern sides, said the mayor, and locusts were still on the northern side of the town.

“I hope wind will not take them to other directions,” he added.

The swarms arrived in Lebanon after invading Syria, Iraq and Jordan.

The UN’s Food and Agriculture Organization (FAO) said the appearance of desert locusts in Syria and Jordan was an “unusual and rare” event caused by several days of strong southerly winds and high temperatures that brought the adult groups to these areas.

It added that while the swarms did not represent a “large-scale invasion” and could be controlled, it feared that some of the mature adults may lay eggs and reproduce.

The ministries of agriculture and defense have mobilized to address the problem as Lebanon is a member of the FAO’s Commission for Controlling the Desert Locust in the Central Region.

Agriculture Minister Abbas Mortada inspected Ersal and said that ministry teams had witnessed “locust waves” and were able to define their approximate scope.

“But we still have fears that these locusts may reproduce and invade fields and farms. People are filming the locust swarms, but they are still relatively far.”

“Locusts will not find anything in Lebanon since the politicians have devoured everything,” said one person on social media, while another said: “Lebanon’s politicians are more dangerous than these swarms.”

“Locusts are the cherry on the top to be added to Lebanon’s economic collapse, political gridlock and starvation,” read another comment.

The crisis has brought the Lebanese back to the beginning of the 20th century, when swarms stripped the country of almost all its vegetation.

At that time Lebanon was already grappling with economic hardship and a double blockade by both the Ottoman Empire and the Allied Forces, resulting in a famine that led to more than a third of the population dying.

In 2013, historians and researchers Dr. Christian Taoutel and Father Pierre Wittouck released a book compiling the previously unpublished French chronicles of Jesuit priests during the famine called “The Lebanese people in the turmoil of the Great War of 1914-1918.”

According to the book, “famine started with a hungry swarm of locusts that devoured everything, where the Lebanese called the year of 1915 ‘The Year of Locusts’ which were impossible to control.”