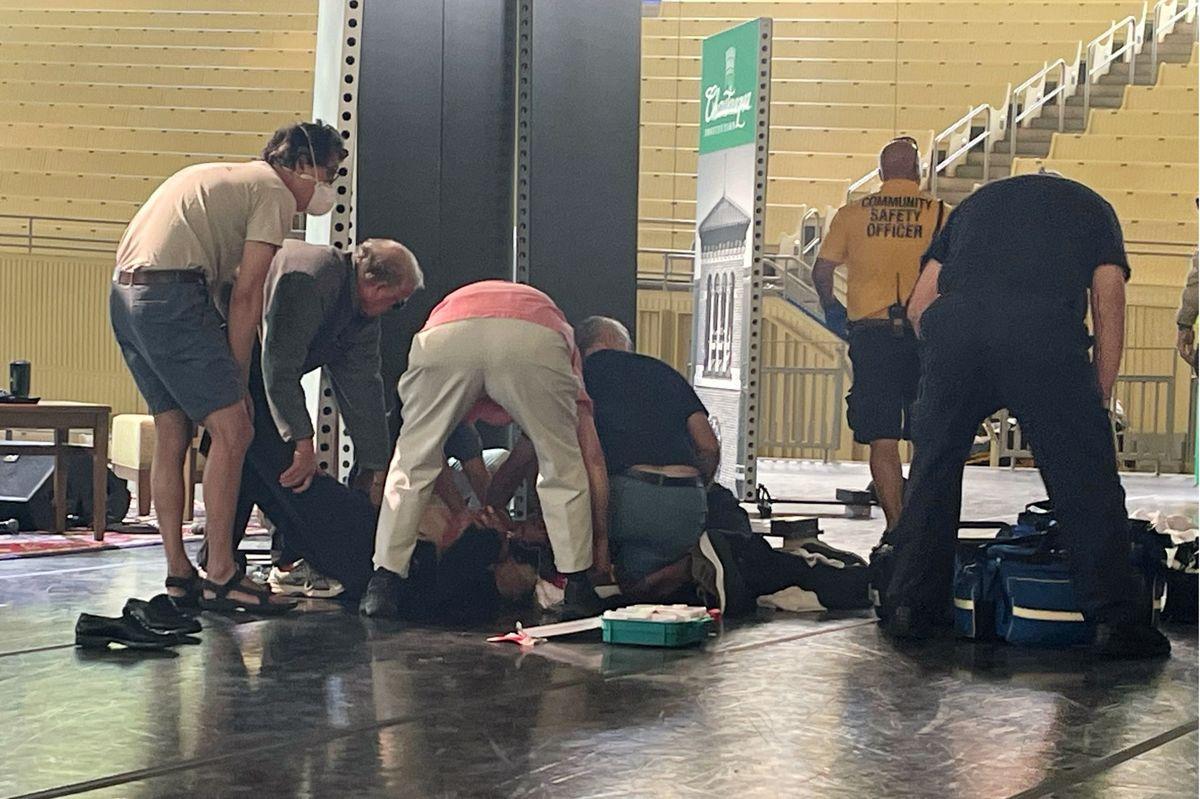 British author Salman Rushdie, whose writings have made him the target of Iranian death threats, was attacked and stabbed in the neck at a literary event on Friday in western New York state.

Police said that a male suspect stormed the stage and attacked Rushdie and an interviewer, with the writer suffering "an apparent stab wound to the neck."

He was rushed by helicopter to a local hospital, police said, adding that his condition was not known.

New York governor Kathy Hochul said Rushdie was alive, and hailed him as "an individual who has spent decades speaking truth to power."

"We condemn all violence, and we want people to be able to feel (the) freedom to speak and to write truth," she said.

A state trooper assigned to the event at the Chautauqua Institution, where Rushdie was due to give a talk, immediately took the suspect into custody.

Police gave no details about the suspect's identity or any probable motive.

The Chautauqua Institution -- which puts on arts and literary programming in a tranquil lakeside community seventy miles (110 kilometers) south of Buffalo -- said in a statement that it was coordinating with law enforcement and emergency officials.

Rushdie, 75, was propelled into the spotlight with his second novel "Midnight's Children" in 1981, which won international praise and Britain's prestigious Booker Prize for its portrayal of post-independence India.

But his 1988 book "The Satanic Verses" brought attention beyond his imagination when it sparked a fatwa, or religious decree, calling for his death by Iranian revolutionary leader Ayatollah Ruhollah Khomeini.

The novel was considered by some Muslims as disrespectful of the Prophet Mohammed.

Rushdie, who was born in India to non-practicing Muslims and today identifies as an atheist, was forced to go underground as a bounty was put on his head -- which remains today.

He was granted police protection by the government in Britain, where he was at school and where he made his home, following the murder or attempted murder of his translators and publishers.

He spent nearly a decade in hiding, moving houses repeatedly and being unable to tell his children where he lived.

Rushdie only began to emerge from his life on the run in the late 1990s after Iran in 1998 said it would not support his assassination.

Now living in New York, he is an advocate of freedom of speech, notably launching a strong defense of French satirical magazine Charlie Hebdo after its staff were gunned down by Islamists in Paris in 2015.

The magazine had published drawings of Mohammed that drew furious reactions from Muslims worldwide.

Threats and boycotts continue against literary events that Rushdie attends, and his knighthood in 2007 sparked protests in Iran and Pakistan, where a government minister said the honor justified suicide bombings.

The fatwa failed to stifle Rushdie's writing and inspired his memoir "Joseph Anton," named after his alias while in hiding and written in the third person.

"Midnight's Children" -- which runs to more than 600 pages -- has been adapted for the stage and silver screen, and his books have been translated into more than 40 languages.

Suzanne Nossel, head of the PEN America organization, said the free speech advocacy group was "reeling from shock and horror."

"Just hours before the attack, on Friday morning, Salman had emailed me to help with placements for Ukrainian writers in need of safe refuge from the grave perils they face," Nossel said in a statement.

"Our thoughts and passions now lie with our dauntless Salman, wishing him a full and speedy recovery. We hope and believe fervently that his essential voice cannot and will not be silenced."