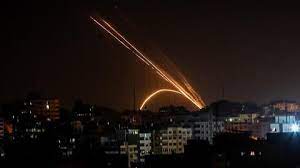 He added that one Syrian soldier was wounded as a result of Israeli airstrikes.

Israeli strikes had been launched toward the ancient city of Homs, with reports indicating that several explosion had sounded off in the city’s al-Mahatta neighborhood.

At the time, unconfirmed video footage of the early morning strike offered a glimpse at what is believed to be an incoming missile.

The Wednesday strikes marked the fourth such incident reported by Syria in November. Israel has carried out multiple attacks against the regional neighbor since civil war broke out within Syria in 2011.