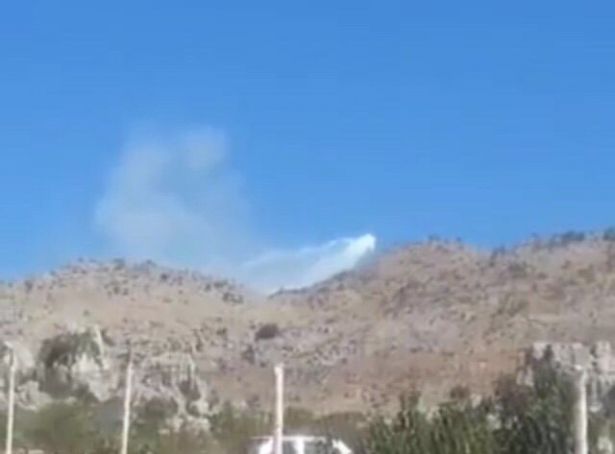 Lebanon’s Hezbollah fired a volley of rockets into Israel on Friday, prompting retaliatory shelling, in a major escalation between the Iran-backed Shiite movement and the Jewish state.

A flare-up along the border this week has seen Israel carry out its first air strikes on Lebanese territory in seven years and Hezbollah claim a direct rocket attack on Israeli territory for the first time since 2019.

But following Friday’s exchange Israel said it did “not wish to escalate to a full war” after the United Nations peacekeeping force in the border region, UNIFIL, warned of “a very dangerous situation,” and called on parties to “cease fire and maintain calm.”

Hezbollah said it fired dozens of rockets at open ground near Israeli positions in the disputed Shebaa Farms border district.

It said the attack came in response to Israeli air strikes on south Lebanon Thursday which were the first since 2014.
An AFP correspondent in south Lebanon said he heard several explosions and saw smoke rising from around the Shebaa Farms.

Three fell short while the others were intercepted by air defenses, it said.

The Israeli military released video of multiple vapor trails in the skies, and said it was “striking the launch sources in Lebanon” but did not elaborate.

The Shebaa Farms district is claimed by Lebanon but the UN regards it as part of the Syrian Golan Heights, which Israel has occupied since 1967 and unilaterally annexed in 1981.

“We believe that neither Hezbollah wants a full-out war, and we definitely do not wish to have a war,” he said after Friday’s exchange.
“We do not wish to escalate to a full war, yet of course we are very prepared for that.”
He said life continued as normal on the Israeli side of the border.

Hezbollah said the truck was stopped after the group conducted Friday’s attack, but said the rockets were fired far from residential areas to ensure civilian safety.

The Lebanese army said it arrested the four people who had launched the rockets and seized the rocket launcher after it was intercepted by villagers.

A series of rocket attacks have been launched from Lebanon toward Israel since Wednesday, but with the exception of Friday’s salvo, they have remained unclaimed.

Before Thursday, Israel’s last air strikes on Lebanon dated back to 2014 when warplanes struck territory near the Syrian border.

They had not targeted Hezbollah’s south Lebanon strongholds since the militants fought a devastating conflict with Israel in 2006.

Lebanon condemned Thursday’s strikes by Israeli as an “escalation” that could mark a change of tactics by Israel, while UNIFIL urged restraint.

The strikes on Thursday were seen by some as a violation of rules of engagement set between Hezbollah and Israel following a 2006 war between the two sides.

Hezbollah has repeatedly vowed to respond to attacks Israel carries out on Lebanese territory.

For its part, Israel has repeatedly warned it will not allow a power vacuum and a deepening economic crisis in Beirut to undermine security on its border.

The Israeli military said it “views the state of Lebanon as responsible for all actions originating in its territory, and warns against further attempts to harm Israeli civilians and Israel’s sovereignty.”

Lebanon is grappling with an economic crisis that the World Bank says is one of the world’s worst since the mid-19th century.

Despite mounting international pressure, political leaders have repeatedly failed to form a government since the cabinet of outgoing premier Hassan Diab resigned in the wake of last year’s monster port explosion.