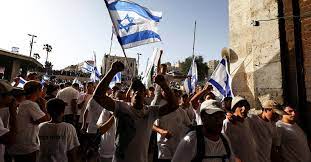 The Secretary-General of the Gulf Cooperation Council condemned on Sunday the storming of Al-Aqsa Mosque by extremists and a member of the Israeli Knesset under the protection of Israeli police.

Many marchers sang and danced as they wound their way through the streets. Others sought confrontation, chanting “Death to Arabs.”

Al-Hajjraf said the new developments were a flagrant violation and a dangerous escalation.

He stressed the need for Israel to respect the historical, legal and religious situation in Jerusalem, and called on the international community to assume its responsibilities to preserve the safety of Al-Aqsa Mosque, the third holiest site in Islam.

The Secretary-General urged Israel to abide by its obligations as an occupying power in accordance with international humanitarian law.

The Arab League also condemned the march, with secretary-general Ahmed Aboul Gheit saying the move constituted ‘a new violation of the status quo, and represented a major provocation to the feelings of the Arab and Islamic nations.’

The so-called ‘Flag March’ was aimed primarily at promoting Israel’s agenda and realizing the extreme right’s goals of abolishing all Palestinian presence in occupied East Jerusalem as well imposing restrictions on worshipers at the Al-Haram Al-Sharif, a statement said.

In a statement Kuwait condemned the storming of Al-Aqsa Mosque ‘by extremists under the protection of Israeli forces.’

“These flagrant violations, which provoke Muslims’ feelings and run counter to international law, portend repercussions on international and regional stability and security, and increase the opportunities of religious-based confrontations,” Kuwait’s foreign ministry said in the statement.

Kuwait also called on the UN Security Council act on the supposed violations and compel Israeli forces to respect international law, and provide protection to Palestinians as well.

Egypt also warned against the negative consequences of the incident, which could cause an escalation in tensions in Palestine.