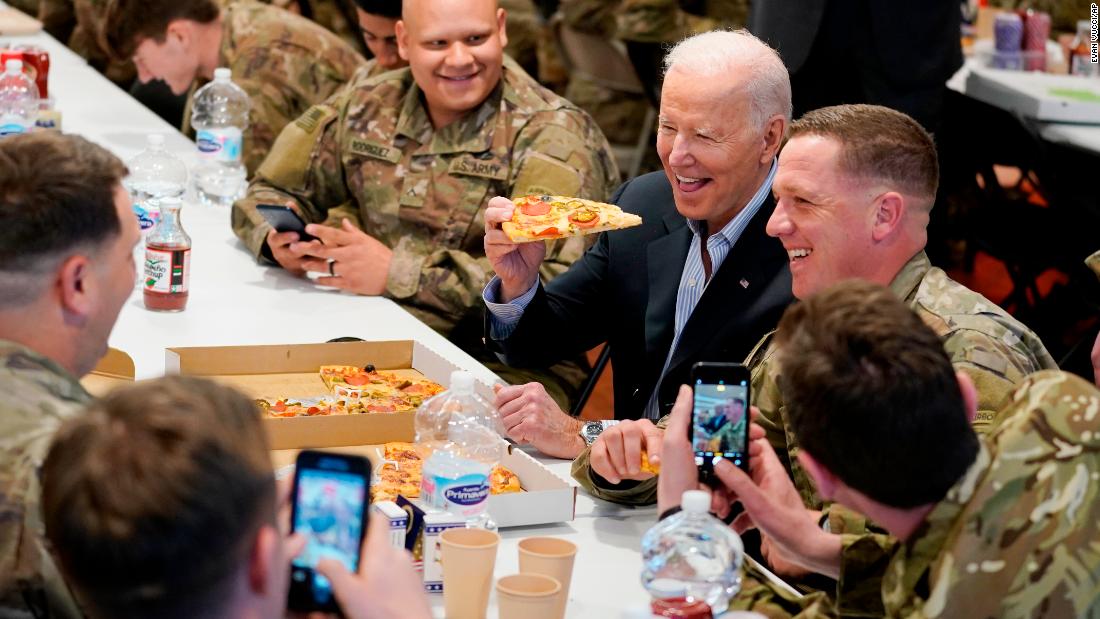 BREAKING NEWS - Biden in Poland, to visit Ukraine border and inspect US troops

U.S. President Joe Biden on Friday got a firsthand look at international efforts to help some of the millions of Ukrainian war refugees in Poland, and spoke to American troops bolstering NATO's eastern flank.

Biden shared a meal with soldiers from the U.S. Army's 82nd Airborne Division stationed in the area of Rzeszow airport, and spoke about the high stakes of the Russian invasion of Ukraine.

"You are in the midst of a fight between democracies and oligarchs," Biden said, referring to rich Russians who have faced Western sanctions since the war started on Feb. 24. "What's at stake is what are your kids and grandkids going to look like in terms of their freedom," Biden said.

Biden's schedule in Poland was briefly delayed after the plane carrying President Andrzej Duda was turned back en route to Rzeszow and made an emergency landing in Warsaw. Duda later boarded a different aircraft and headed back.

An official in his office said Duda had not been in any danger in the incident, which for many Poles brought back memories of the 2010 Smolensk air crash in Russia that killed top military officers and politicians, including President Lech Kaczynski.

"We all know the history we have when it comes to flights," Duda told reporters. "I did not argue, that was the decision of the plane's captain," he said, adding that the passengers could feel that the plane had become unstable.

Biden received a briefing on the humanitarian response to help civilians sheltering from Russian attacks inside Ukraine and to respond to the growing flow of refugees fleeing Ukraine.

"I'm here in Poland to see first hand the humanitarian crisis," he said at the start of a meeting with NGOs, U.S. and Polish officials and Duda. "Quite frankly part of my disappointment is I can't see it first hand like I have in other places. They won't let me, understandably, I guess, cross the border and take a look at what's going on in Ukraine."

Poland has taken in more than 2.23 million people fleeing violence in Ukraine, out of some 3.7 million all together who have poured over borders across central Europe during the last four weeks.

"Hundreds of thousands of people are being cut off from help by Russian forces and are besieged in places like Mariupol," Biden said in a reference to the port city in eastern Ukraine which has been under siege since the war's early days.

"It's like something out of a science fiction movie."

Biden told reporters in Brussels on Thursday that his visit will "reinforce my commitment to have the United States make sure we are a major piece of dealing with the relocation of all those folks, as well as humanitarian assistance needed both inside Ukraine and outside Ukraine."

In Rzeszow, TV footage showed him sharing a pepperoni and jalapeno pizza and chatting with U.S. paratroopers gathered in the base's cafeteria.

Biden on Thursday attended an unprecedented triple summit in Brussels of NATO, G7 nations and European leaders which addressed the continent's worst conflict since the 1990s Balkans wars.

On Friday evening, he landed in the capital Warsaw. On Saturday, he was scheduled to have further talks with Duda and give what the White House described as a major address.

Poland hopes that Biden's visit will underline the security assurances already made by the United States that it will defend "every inch" of NATO territory. Warsaw is keen to see even more U.S. troops stationed on NATO's eastern flank.

Poland is also likely to raise the idea of an international peacekeeping mission involving troops being stationed in Ukraine, an idea first proposed by ruling party leader Jaroslaw Kaczynski during a trip to Kyiv.

En route to Poland on Air Force One, national security adviser Jake Sullivan briefed reporters. Asked whether Russia would try to bomb convoys carrying supplies to Ukraine over land through NATO countries, Sullivan said: "We are doing contingency planning for the possibility that Russia chooses to strike NATO territory in that context or in any other context.

"And the president has been about as clear as one can be about his absolute determination to respond decisively, alongside the other members of our alliance if Russia attacks NATO," Sullivan said.

He also suggested the United States and its allies could still impose new measures to punish Russia for its invasion of Ukraine.

"Of course, there are additional measures to tighten the screws on sanctions, and we will be constantly reviewing those," he said.

Moscow calls its actions in Ukraine a "special military operation" to disarm its neighbor. Kyiv and its Western allies call it an unprovoked war of aggression and say Russia's true aim was to overthrow the government of what President Vladimir Putin regards as an illegitimate state.