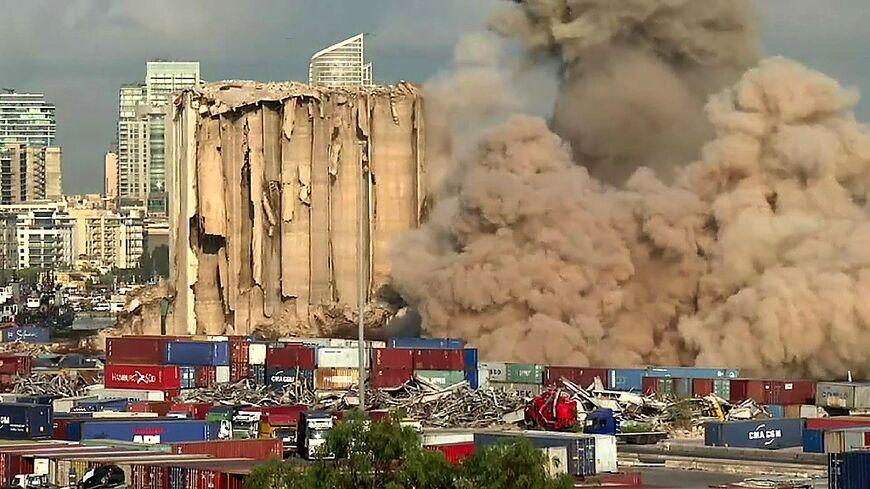 Eight more grain silos at Beirut port toppled Tuesday, succumbing to damage from a devastating 2020 explosion in the third such collapse in a month, AFP correspondents reported.

No injuries were reported — the area had been long evacuated — but the collapse was another painful reminder of the horrific August 2020 explosion.

A cloud of dust rose over the port after the collapse, which brought down the last of the northern block of silos that was more heavily damaged in the blast and where a fire had been burning since July.

The country's caretaker environment minister, Nasser Yassin, told Lebanese TV that the government will now look into how to ensure the southern block remains standing. He urged residents near the port to wear masks, and said experts would conduct air quality tests.

Only 12 of the original 48 silos are still standing, all of them in the southern block.

The remaining southern block is more stable and not at imminent risk of collapse, said French civil engineer Emmanuel Durand, who has installed sensors on the silos.

Durand, who volunteered for the government-commissioned team of experts, told The Associated Press that the speed of the tilt rapidly accelerated overnight on Monday, just hours before the collapse.

“There was a very sharp acceleration, which was expected,” Durand explained. “When this happens, you know it’s going to go.”

The 50 year old, 48 meter (157 feet) tall silos had withstood the force of the explosion of haphazardly stored ammonium nitrate fertilizer on Aug. 4, 2020, effectively shielding the western part of Beirut from the blast that killed over 200 people, injured more than 6,000 and badly damaged entire neighborhoods.

The fire has been burning in the silos for more than a month as remaining grain stocks ferment in the summer heat.

In April, the government ordered the silos' demolition but the operation was put on hold, partly because of objections from relatives of blast victims who want them preserved as a memorial. They also contend that the silos may contain evidence useful for the judicial probe.

In July, a fire broke out in the northern block of the silos due to the fermenting grains. Firefighters and Lebanese Army soldiers were unable to put it out and it smoldered for over a month. Officials had warned that the silo could collapse, but feared risking the lives of firefighters and soldiers who struggled to get too close to put out the blaze or drop containers of water from helicopters.

The environment and health ministries in July issued instructions to residents living near the port to stay indoors in well-ventilated spaces.

In late July, part of the northern block collapsed for the first time. Days later on the second anniversary of the Beirut Port blast, roughly a fourth of the structure collapsed. On Sunday, the fire expanded to large sections of the silo.

Survivors of the blast and residents near the port have told The Associated Press that watching the fire from their homes and offices was like reliving the trauma from the port blast, which started with a fire in a warehouse near the silos that contained hundreds of tons of explosive ammonium nitrate, improperly stored there for years.

"We hold authorities responsible for what happened with the silos," said Mariana Fodoulian, who lost her sister in the explosion.

"We must preserve the southern block of silos" as a memorial, Fodoulian said, echoing the demands of many blast victim relatives.

Relatives had called for a sit-in near the port at 5 p.m.

Hamieh said funding would come from international donors as well as the government, which has been bankrupted by a crushing financial crisis.